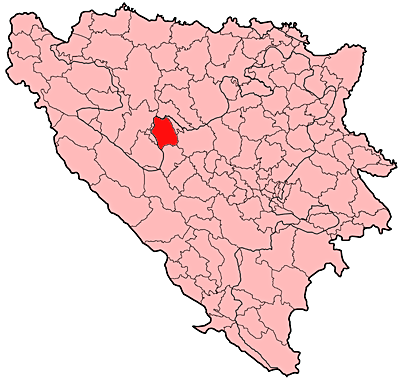 Jajce is a town and municipality located in the central part of . It is part of the of the entity. It is on the crossroads between , and , on the confluence of the rivers Pliva and Vrbas.

Jajce is a town that was first built in the and which served as the capital of the independent Bosnian kingdom during its time. The town has gates as fortifications, as well as a castle which has walls which lead to the various gates around the town, to protect the castle. When the Bosnian kingdom fell to the in , Jajce was taken by the Ottomans but was retaken next year by Hungarian King . About 10–20 kilometres from the Jajce lies the castle and town area which is older but smaller than Jajce, it is believed the town of Jajce was previously Komotin but was moved after the black death.

During this period, the last Bosnian queen restored the Church of in Jajce, today the oldest church in town. Eventually, in , Jajce became the last Bosnian town to fall to Ottoman rule. There are several churches and mosques built in different times during different rules, making Jajce a rather diverse town in this aspect.

Jajce gained prominence during the because it hosted the second convention of the on , a meeting that set the foundation for the after WWII.

At the end of April and the beginning of , almost all Serbs left the city and fled to territory under the control. The Serbian Orthodox Church (Crkva Uspenja Presvete Bogorodice) was blown up in the night between 10th and 11th of [http://www.spc.yu/Genocid/Banjalucka/banjaluckal.html] . In the summer of 1992, the (VRS) started heavy bombardment of the city. Serb forces entered Jajce in October 1992, apparently due to lack of cooperation between Bosnian government and Croat forces. The Bosniak and Croat population escaped through Divičani into . In the Croat counteroffensives of August-September 1995 the town was taken by Croatian forces with most of the Serb population fleeing. Jajce became part of the according to the .

In the town itself, there was 13,579 people, with distribution by ethnic groups:

The economy of the Jajce municipality is nowadays weak. UNESCO has started to renovate the historical parts of the city together with a Swedish organisation named "Kulturarv utan gränser" (Cultural Heritage without Borders). The main project of the Swedish company was to renovate the old traditional houses which symbolised the panoramic view of the city and the waterfall. As of 2006, most of the houses were rebuilt but works are ongoing for the fortress.

The town is also famous for its beautiful where the meets the river Vrbas. It was 30 meters high, but during the Bosnian war, the area was flooded and the waterfall is now 20 meters high. The flooding may have been due to an and/or attacks on the hydroelectric power plant further up the river.

The roads and other infrastructure that connect Jajce to the villages surrounding it (part of the Jajce municipality) are in bad shape due to the wartime devastation.

Jajce also lies near Pliva lake and the rivers Pliva and Vrbas flow through the city. Jajce has a rich history and many remains of old times like the St Luke church and the fortress. Jajce was always known for its rich history but it was in the year 2006 that the city was first nominated to be listed as a UNESCO heritage site.

Jajce is situated in the mountains, there is a beautiful countryside near the city, rivers such as the Vrbas and Pliva, lakes like Pliva lake, which is also a popular destination for the local people and some tourists. This lake is called Brana in the local parlance. Not far from Jajce there are mountains that are over 2000 meters high like Vlasic near the city of . Travelling through the mountain roads to the city may not sit well with some visitors, because the roads are in poor condition, but the scenery is picturesque.