Old City or Inner City (Azerbaijani: İçəri Şəhər) is the historical core of Baku. In December 2000, the Old City of Baku, including the Palace of the Shirvanshahs and Maiden Tower, became the first location in Azerbaijan to be classified as a World Heritage Site by UNESCO. 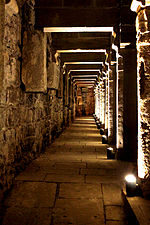 It is widely accepted that the Old City, including its Maiden Tower, date at least to the 12th century, with some researchers contending that construction dates as far back as the 7th century. The question has not been completely settled.[1]

In 1806, when Baku was annexed by the Russian Empire, there were 500 households and 707 shops, and a population of 7,000 in the Old City (then the only neighbourhood of Baku). Between 1807-1811, the city walls were repaired and the fortifications extended. The city had two gates: the Salyan Gates and the Shemakha Gates. The city was protected by dozens of cannons set on the walls. The port was re-opened for trade, and in 1809 a customs office was established.[2]

It was during this period that Baku started to extend beyond the city walls, and new neighbourhoods emerged. Thus the terms Inner City (Azerbaijani: İçəri Şəhər) and Outer City (Azerbaijani: Bayır Şəhər) came into use. Referring to the early Russian rule, Bakuvian actor Huseyngulu Sarabski wrote in his memoirs:[3]

Baku was divided into two sections: Ichari Shahar and Bayir Shahar. The Inner City was the main part. Those who lived in the Inner City were considered natives of Baku. They were in close proximity to everything: the bazaar, craftsmen's workshops and mosques. There was even a church there, as well as a military barracks built during the Russian occupation. Residents who lived inside the walls considered themselves to be superior to those outside and often referred to them as the "barefooted people of the Outer City

With the arrival of Russians the traditional architectural look of the Old City changed. Many European buildings were constructed during the 19th century and early 20th century, using styles such as Baroque and Gothic.

In 1865, a part of the city walls overlooking the sea was demolished, and the stones were sold and used in the building of the Outer city. The money obtained from this sale (44 000 rubles) went into the construction of the Baku Boulevard. In 1867, the first fountains of Baku appeared in the Boulevard.

In this period two more gates were opened, one of them being famous Taghiyev Gate (1877). The opening of new gates and passes continued well into the Soviet period. 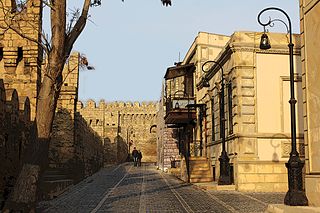 Artistic model of 13th century Sabayil castle near Baku Bay, also known as the 'Atlantis of the Caspian Sea'.

In 2008 an ancient underpass, dated back to the 19th century, was discovered while holding reconstruction at Vahid park. The workers marched about 200 meters along the tunnel, but then stopped, having met with water and silt masses. Judging by the photographs taken in the cave, the tunnel is built very thoroughly, the walls, ceiling and floor of the tunnel are paved with white sawn stone. The workers also found a handful of coins of the Soviet period, suggesting that there was somebody in the tunnel before them, but the unknown went down at least 20 years ago.[5]

According to scholar Vitaly Antonov, in the late 18th century Baku was the Caucasian center of the revolutionary movement, and the found underpass was dug to save the governor in case of mass riots in the city. Another version is that this passage is one of the several, leading to the ancient Sabayil Castle, flooded by the Caspian Sea. There are several underground tunnels leading from the Palace of Shirvanshahs and Synykh Gala, situated in Icheri Shekher, to the sea. Synykh Gala was the mosque in the 15th century, in the times of the Shah Ismail Khatai, and was destroyed by the troops of Peter I. That is, the discovered passage is part of the underground network connecting the city of Sabayil to the land.[6]

The first known madrasa in the Old City was opened in the 12th century, and amongst its popular lectors was Baba Kuhi Bakuvi. Four hundred years later, another distinguished scholar named Seyid Yahya Bakuvi (died in 1403) founded a Darulfunun (the House of Arts and Sciences, a prototype of a modern university) at the Palace of the Shirvanshahs. But with the fall of the Shirvanshahs' state, the education in Baku gradually diminished. By 1806 there remained only twelve mollakhanas (primary and secondary schools, kept by mosques) in the Old City, and only three of them survived into 20th century. Later, all such schools were closed and replaced with modern kindergartens and state secular schools.

In December 2000, the Old City of Baku with the Palace of the Shirvanshahs and Maiden Tower became the first location in Azerbaijan classified as a World Heritage Site by UNESCO.

Three years later, in 2003, UNESCO placed the Old City on the List of World Heritage in Danger, citing damage from a November 2000 earthquake, poor conservation, and "dubious" restoration efforts.[7]

In 2009 The World Heritage Committee praised Azerbaijan for its efforts to preserve the walled city of Baku and removed it from the endangered list.[8][9] (See List of World Heritage Sites in Azerbaijan)

For a long period of time, an explicit symbol of the Old City was a mulberry tree located behind the Djuma Mosque. It was believed that the tree was several hundred years old. The tree made its way into many sayings and songs popular in the Old City, and became a local landmark. The place where that tree was located was referred to as Mulberry Tree Square. However, in 1970s the mulberry tree was cut down, because of the nearby construction works.

Another popular landmark of the Old City is the local bookstore that sells mostly second-hand, but also new books. Situated amongst the Bukhara and the Multani Caravanserais, the Maiden Tower, and Hajinski’s Palace (otherwise known as Charles de Gaulle House, because he stayed there during World War II), it is a popular destination of Bakuvian students and bibliophiles, mostly because of its low prices.

The old city of Baku is depicted on the obverse of the Azerbaijani 10 manat banknote issued since 2006.[10]