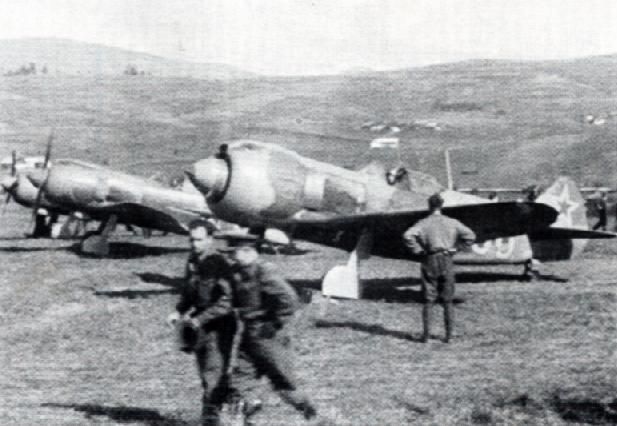 caption =
designer =
first flight = March 1942
introduced = July 1942
retired =
status =
primary user =
more users =
produced =
number built = 9,920
unit cost =
variants with their own articles = The La-5 (Лавочкин Ла-5) was a Soviet of . It was a development and refinement of the LaGG-3 and was one of the 's most capable types of warplane.

The La-5's heritage began even before the outbreak of war, with the LaGG-1, a promising yet underpowered aircraft – turning a full circle, for example, took 20 seconds. The LaGG-3 was a modification of that design that attempted to correct this by both lightening the airframe and fitting a more powerful engine. Nevertheless, this was not enough, and the lack of power remained a significant problem.

In early , two of the LaGG-1 and -3's designers, and , attempted to correct this deficiency by experimentally fitting a LaGG-3 with the more powerful . Since the LaGG-3 was powered by an , they accomplished this by grafting on the nose section of a (which used this engine). By now, the shortcomings of the LaGG-3 had caused Lavochkin to fall out of 's favour, and factories previously assigned to LaGG-3 construction had been turned over to building the rival and Yak-7. The design work required to adapt the LaGG-3 to the new engine and still maintain the aircraft's balance was undertaken by Lavochkin in a small hut beside an airfield over the winter of -, all completely unofficially.

When the prototype took flight in March, the result was extremely pleasing - the fighter finally had a powerplant that allowed it to perform as well in the air as it had been supposed to on paper. After flying, the LaG-5 (the change in name reflecting that one of the original LaGG designers was no longer with the programme), Air Force test pilots declared it superior to the Yak-7, and intensive flight tests began in April. After only a few weeks, the design was modified further, cutting down the rear fuselage to give the pilot better visibility.

By July, Stalin ordered maximum-rate production of the aircraft, now simply known as the La-5 and the conversion of any incomplete LaGG-3 airframes to the new configuration. While still inferior to the best German fighters at high altitudes, the La-5 proved to be every bit their match closer to the ground. With most of the air combat over the Eastern Front taking place at altitudes of under 5,000 m (16,400 ft), the La-5 was very much in its element. Its rate of roll was excellent.

Further refinement of the aircraft involved a fuel-injected engine, further lightening of the aircraft, and fixed s to improve all-round performance. This was designated the La-5FN and would become the definitive version of the aircraft. A full circle turn took 18-19 seconds - a beautiful dogfighter. Altogether, 9,920 La-5s of all variants were built, including a number of dedicated versions, designated La-5UTI. Further refinements of the aircraft would lead to the with a reputation for the aileron turn. Some had three new B-20 cannon in the cowl with a salvo of 3.4 kg per second weight of fire.

Whenever a low flying attacker couldn't be intercepted even by the new Yak-9U, the La-7 would be utilized.The leading Soviet ace of World War II, (62 kills), flew this fighter when he shot down an Me 262 jet.

A number of La-5s continued in the service of nations after the end of the war, including .

In the summer of 1943, a brand-new La-5 made a forced landing on a German airfield providing Luftwaffe with an opportunity to test-fly the newest Soviet fighter. Test pilot wrote a detailed report of his experience

In comparison with Luftwaffe fighters, the La-5FN was found to have a comparable top speed and acceleration at low altitude. It possessed a higher roll rate and a smaller turn radius than the Bf 109 and a better climb rate than the Fw 190A-8. Bf 109 utilizing had superior performance at all altitudes, and Fw 190A-8 had better dive performance. Lerche's recommendations were to attempt to draw the La-5FN to higher altitudes, to escape attacks in a dive followed by a high-speed shallow climb, and to avoid prolonged turning engagements.

* [http://wio.ru/tacftr/lag.htm Lavochkin fighters from LaGG-1 to La-11]
* [http://mig3.sovietwarplanes.com/la5/la5.html Features development, history, and some of the best color profiles of the La-5 available on the web.]
* [http://www.btinternet.com/~fulltilt/deshist.html Lavochkin La5 FN & La 7 A Design History]