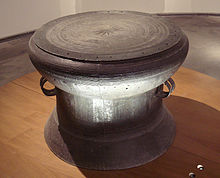 The Đông Sơn culture was a prehistoric Bronze Age age in Vietnam centered at the Red River Valley of northern Vietnam. At this time the first Vietnamese kingdoms of Văn Lang and Âu Lạc appeared. Its influence flourished to other parts of Southeast Asia, including the Indo-Malayan Archipelago from about 1000 BC to 1 BC.[1]

The Đông Sơn people, also known as Lạc or Lạc Việt were skilled at cultivating rice, keeping buffaloes and pigs, fishing and sailing with long dug-out canoes. They also were skilled bronze casters, as can be seen in the famous Đông Sơn drums, which have been found widely in Southeast Asia and the Southern China. 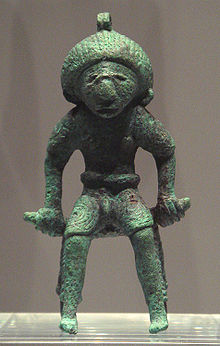 The Đông Sơn culture is linked to the Tibeto-Burman culture, the Dai culture in Yunnan and Laos, the Mon–Khmer cultures and the culture associated with the Plain of Jars in Laos. Similar artifacts have been found in Cambodia along the Mekong River dating back to the 4th millennium BC. Đông Sơn influence is seen throughout Southeast Asia, from the moko drum of Alor, Indonesia (suspected of originating with Đông Sơn bronze drums) to the design of keris knife.

To the south of the Đông Sơn culture was the proto-Cham Sa Huỳnh culture.

The origins of Đông Sơn culture can be traced back to ancient bronze castings. The theory based on the assumption that bronze casting in eastern Asia originated in northern China; however, this idea has been discredited by archaeological discoveries in north-eastern Thailand in the 1970s. In the words of Clark D. Neher, currently Distinguished Teaching Professor in Dept. of Political Science at Northern Illinois University, "Bronze casting began in Southeast Asia and was later borrowed by the Chinese, not vice versa as the Chinese scholars have always claimed".[2] The Dong Song and other southeast Asian cultures were known to have used lost-wax bronze casting techniques from a very early time - perhaps predating the first millennium BCE.

This interpretation is supported by the work of modern Vietnamese archaeologists. They have found that the earliest bronze drums of Đông Sơn are closely related in basic structural features and in decorative design to the pottery of the Phùng Nguyên culture. It is still uncertain whether the bronze drums were made for religious ceremonies, to rally men for war, or for another secular activity. The various discerning images and arrow points engraved on the drums has raised speculation that the drums may have been used as a local seasonal calendar.[1] Furthermore, the recurring images of a figure holding a scroll of paper and the finding of these dated papers at various sites may point to the Đông Sơn as the first peoples who began the papermaking process.[2] [3] However, as of now, these are only theories proposed by Vietnamese scholars.

The bronze drums were made in significant proportions in Vietnam and parts of southern China and were then traded to the south and west to places such as Java and the Bali islands. Thus it became valued by people with very different cultures. The Đông Sơn bronze drums exhibit the advanced techniques and the great skill in the lost-wax casting of large objects, the Co Loa drum would have required the smelting of between 1 and 7 tons of copper ore and the use of up to 10 large casting crucibles at one time. Most scholars agree the Đông Sơn drums display an artistic level reaching perfection that few cultures of the time could rival.

Expansion of the Dong Son culture

The discovery in the late 17th century of large, elaborately incised drums in mainland and island southeast Asia first alerted Western scholars to the existence in the region of distinctive early bronze-working cultures. Ranging in height from a few inches to over six feet, up to four feet in diameter, and often of considerable weight, such drums are the most widely dispersed products of the Đông Sơn culture. Examples produced in Vietnam, in addition to works made locally, have been found in south China, throughout mainland southeast Asia, and in Sumatra, Java, Bali, and Irian Jaya.

The function of these drums, often found in burials, remains unclear: they may have been used in warfare or as part of funerary or other ceremonial rites. Models of the drums, produced in bronze or clay, were made to be included in burials. This small bronze example has the rounded top, curved middle, and splayed base often found in drums from Vietnam. The central loop and the four small frogs on the tympanum are characteristic features of examples produced from the 3rd century BC to the 1st century AD. The starburst pattern in the center of the tympanum, a standard motif on Đông Sơn drums, is surrounded by a row of linked concentric circles and crosshatching. These designs are repeated around the side of the top section and just above the base. On the center of the drum, four stylized scenes showing warriors. Many bronze drums of the Đông Sơn period have been reported in South and Southwest China, Burma, Thailand, Laos and Indonesia.

In Vietnam, approximately 140 drums were discovered in many locations throughout Vietnam from the high land region of the north to the plains of the south and as far as to the Phu Quoc island, in the Gulf of Thailand.