Porton Down is a United Kingdom government and military science park. It is situated slightly northeast of Porton near Salisbury in Wiltshire, England. To the northwest lies the MoD Boscombe Down test range facility which is operated by QinetiQ. On maps, Porton Down has a "Danger Area" surrounding the entire complex.[1]

It is home to the Defence Science and Technology Laboratory, known as Dstl. Dstl is an Executive Agency of the Ministry of Defence (MoD), and the site is believed to be one of the United Kingdom's most sensitive and secretive government facilities for military research, including CBRN defence. The Dstl site occupies 7,000 acres (28 km²). [2]

It is also home to the Health Protection Agency's Centre for Emergency Preparedness and Response as well as a small science park which includes companies such as Tetricus Bioscience[3] and Ploughshare Innovations.[4]

The site is commonly confused with the UK's nearby CBRN training facility, the Defence CBRN Centre at Winterbourne Gunner.

Porton Down was set up to provide a proper scientific basis for the British use of chemical warfare, in response to the earlier German use of this means of war in 1915. Work at Porton started in March 1916. At the time, only a few cottages and farm buildings were scattered on the downs at Porton and Idmiston. 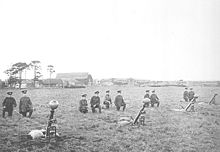 Porton Down originally opened in 1916 as the Royal Engineers Experimental Station as a site for testing chemical weapons. The laboratory's remit was to conduct research and development regarding chemical weapons agents such as chlorine, phosgene and mustard gas by the British armed forces in the First World War.

By 1918 the original two huts had become a large hutted camp with 50 officers and 1,100 other ranks. Studies in the Great War mainly concerned the dissemination of chlorine and phosgene and, later, mustard gas. By May 1917 the focus for anti-gas defence and respirator development had moved from London to Porton Down.

After the Armistice Porton Down was reduced to a skeleton staff.

In 1919 the War Office set up the Holland Committee to consider the future of chemical warfare and defence. By 1920, the Cabinet agreed to the Committee’s recommendation that work should continue at Porton Down and from that date a slow permanent building programme began coupled with the gradual recruitment of civilian scientists. By 1922, there were 380 servicemen, 23 scientific and technical civil servants and 25 “civilian subordinates”. By 1925 the civilian staff had doubled.

During the Second World War, research concentrated on chemical weapons such as nitrogen mustard, plus biological weapons including anthrax and botulinum toxin. In 1942, highly successful tests of an anthrax bio-weapon developed at Porton Down were held at Gruinard Island.

During the Second World War as Allied armies penetrated Germany, operational stockpiles of munitions and weapons were discovered which contained new chemical warfare agents; the highly toxic organophosphorous nerve agents, unknown to Britain and the Allies.

The Common Cold Unit (CCU) was sometimes confused with the Microbiological Research Establishment at Porton Down, with which it occasionally collaborated but was not officially connected. The CCU was located at Harvard Hospital, Harnham Down, on the west side of Salisbury.

When World War II ended, the advanced state of German technology regarding nerve agents such as tabun, sarin and soman surprised the Allies and they were eager to capitalise on it. Subsequent research took the newly discovered German nerve agents as a starting point, and eventually VX nerve agent was developed at Porton Down in 1952.

In the late 1940s and early 1950s, research and development at Porton Down was aimed at providing Britain with the means to arm itself with a modern nerve agent based capability and to develop specific means of defence against these agents. In the end these aims came to nothing on the offensive side because of the decision to abandon any sort of British chemical warfare capability. On the defensive side there were years of difficult work to develop the means of prophylaxis, therapy, rapid detection and identification, decontamination and more effective protection of the body against nerve agents, capable of exerting effects through the skin, the eyes and respiratory tract.

Tests were carried out on servicemen to determine the effects of nerve agents on human subjects, with one recorded death due to a nerve gas experiment. There have been persistent allegations of unethical human experimentation at Porton Down, such as those relating to the death of Leading Aircraftman Ronald Maddison, aged 20, in 1953. Maddison was taking part in sarin nerve agent toxicity tests. Sarin was dripped on to his arm and he died shortly afterwards as a result.

In the 1950s the Chemical Defence Experimental Establishment became involved with the development of CS, a riot control agent, and took an increasing role in trauma and wound ballistics work. Both these facets of Porton Down’s work had become more important because of the situation in Northern Ireland.

In 1970 the Chemical Defence Establishment became the title of the senior establishment at Porton Down and remained for the next 21 years. Preoccupation with defence against the nerve agents continued but in the 1970s and 1980s the Establishment was also concerned with studying reported chemical warfare by Iraq against Iran and against its own Kurdish population.

Until 2001 the military installation of Porton Down was part of the UK government's Defence Evaluation and Research Agency. DERA was split into QinetiQ, initially a fully government owned company, and the Defence Science and Technology Laboratory (Dstl). Dstl incorporates all of DERA's activities deemed unsuitable for the privatisation planned for QinetiQ, particularly Porton Down.

Support of British forces in the Gulf

Following the Iraqi invasion of Kuwait in August 1990, the problems increased, culminating in active operational support of British Forces in the Gulf region. After the Gulf ceasefire the establishment continued to provide technical support for the United Nations Special Commission set-up to oversee the destruction of the Iraqi capability to use nuclear, biological and chemical weapons. This continued until 1999 when Iraq withdrew co-operation from the Commission.[citation needed]

Most of the work carried out at Porton Down has to date remained secret, and the UK Government have been criticised for not revealing the true extent of the research that was carried out on servicemen. The facility produces a high efficacy anthrax vaccine which is sold throughout the world. However, certain Members of Parliament have admitted that they are not fully aware of everything that goes on at Porton Down.

"I would not say that the Defence Committee is micro-managing either DERA or Porton Down. We visit it, but, with eleven members of Parliament and five staff covering a labyrinthine department like the Ministry of Defence and the Armed Forces, it would be quite erroneous of me and misleading for me to say that we know everything that’s going on in Porton Down. It’s too big for us to know, and secondly, there are many things happening there that I’m not even certain Ministers are fully aware of, let alone Parliamentarians." [9]

Deaths attributed to Porton Down

Dstl Porton Down has also been involved in human testing.

A second inquest on Ronald Maddison commenced in May 2004, after many years of lobbying by his relatives and their supporters. It later found the death of Ronald Maddison to have been unlawful;[10] this was challenged by the Ministry of Defence,[11] but the verdict was upheld and the case settled.[12]

In February 2006 three ex-servicemen were awarded compensation in an out-of-court settlement after claims they were given LSD without their consent during the 1950s.[13]

Dstl Porton Down is also involved in animal-testing, where the "three Rs" of 'reduce' (the number of animals used), 'refine' (animal procedures) and 'replace' (animal tests with non-animal tests) are used as the basic code of practice.[14] And there has been a decrease in animal experimentation in recent years.[15]

The Defence Science and Technology Laboratory complies with all UK legislation relating to animals.[16]

During 2005, 21,118 procedures were undertaken which involved the use of animals,[17] nearly double the number undertaken in 1997.[18] In 2005, approximately 95% of the animals used (20,016) were mice. Other animals used included guinea pigs, rats, pigs, ferrets, sheep, and non-human primates (believed to be marmosets, rhesus monkeys and macaques). The figures released in 2005 also reveal that one cow was used in a secret experiment in 2004.[17]

Like other aspects of research at Porton Down, precise details of animal experiments are generally kept secret. However, media reports have suggested they include exposing monkeys to anthrax, draining the blood of pigs and injecting them with E. coli bacteria, and exposing animals to a variety of lethal, toxic nerve agents.[19] Different animals are used for very different purposes. According to a 2002 report from the Animal Welfare Advisory Committee of the Ministry of Defence, mice are used mainly to research "the development of vaccines and treatments for microbial and viral infections", while pigs are used to "develop personal protective equipment to protect against blast injury to the thorax".[20]

Porton Down in popular culture