Mount Tai (Chinese: 泰山; pinyin: Tài Shān) is a mountain of historical and cultural significance located north of the city of Tai'an, in Shandong province, People's Republic of China. The tallest peak is the Jade Emperor Peak (simplified Chinese: 玉皇顶; traditional Chinese: 玉皇頂; pinyin: Yùhuáng Dǐng), which is commonly reported as 1,545 metres (5,069 ft) tall,[1] but is described by the PRC government as 1,532.7 metres (5,029 ft).[2]

Mount Tai is one of the "Five Sacred Mountains". It is associated with sunrise, birth, and renewal, and is often regarded the foremost of the five. Mount Tai has been a place of worship for at least 3,000 years and served as one of the most important ceremonial centers of China[3] during large portions of this period.

Traces of human presence at Mount Tai date back to the Paleolithic period. Human settlement of the area can be proven from the neolithic period onwards. During this time, two cultures had emerged near the mountain, the Dawenkou culture to the south and the Longshan culture to the north. In the Spring and Autumn Period, the mountain lay on the boundary between the competing States of Qi (north of the mountain) and Lu (south). In the ensuing Warring States Period, the State of Qi erected a 500 km-long wall to protect itself against an invasion. Ruins of this wall are still present today. The name Tai'an of neighboring city is attributed to the saying "If Mount Tai is stable, so is the entire country" (both characters of Tai'an, "泰" and "安", have the independent meaning of "peace").

Religious worship of Mount Tai has a tradition of 3,000 years, it has been practiced from the time of the Shang to that of the Qing Dynasty. Over time, this worship evolved into an official imperial rite and Mount Tai became one of the principal places where the emperor would pay homage to heaven (on the summit) and earth (at the foot of the mountain) in the Feng (Chinese: 封; pinyin: Fēng) and Shan (Chinese: 禪; pinyin: Shàn) sacrifices respectively. The two sacrifices are often referred to together as the Fengshan sacrifices (Chinese: 封禪; pinyin: Fēngshàn). Carving of an inscription as part of the sacrifices marked the attainment of the "great peace".[4] In 219 BC, Qin Shi Huang, the first Emperor of China, held a ceremony on the summit and proclaimed the unity of his empire in a famous inscription. During the Han Dynasty, the Feng and Shan sacrifices were considered the highest of all sacrifices.[4]

Mount Tai has been a UNESCO World Heritage Site since 1987. In 2003, it attracted around 6 million visitors. A renovation project was completed by late October 2005, which aimed at restoring cultural relics and the renovation of damaged buildings of cultural significance. 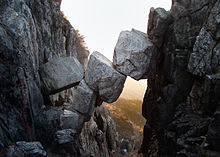 Mount Tai is a tilted fault-block mountain with height increasing from the north to the south. It is the oldest example of a paleo-metamorphic formation from the Cambrian Period in eastern China. Known as the Taishan Complex, this formation contains magnetized, metamorphic, and sedimentary rock as well as intrusions of other origins during the Archean Era. The uplift of the region started in the Proterozoic Era; by the end of the Proterozoic, it had become part of the continent.

Besides the Jade Emperor Peak, other distinctive rock formations are the Heaven Candle Peak, the Fan Cliff, and the Rear Rock Basin.

Mount Tai lies in the zone of oriental deciduous forest; about 80% of its area is covered with vegetation. The flora is known to comprise almost 1,000 species. Some of the trees in the area are very old and have cultural significance, such as the Han Dynasty Cypresses, which were planted by the Emperor Wu Di, the Tang Chinese Scholartree (about 1,300 years old), the Welcoming-Guest Pine (500 years old) and the Fifth-Rank Pine, which was named originally by the Emperor Qin Shi Huang, but was replanted about 250 years ago.

Mt. Taishan rises abruptly from the vast plain of central Shandong, and is naturally endowed with many scenic sites. Geologically, it is a tilted fault-block mountain, higher to the south than north, and is the oldest and most important example of the paleo-metamorphic system representative of the Cambrian Period in eastern China. Referred to as the Taishan Complex, it comprises magnetized, metamorphic, sedimentary rock and an intrusive mass of various origins that were formed in the Archean Era 170-200 million years ago. Subsequently, in the Proterozoic Era, the Taishan region began to rise, becoming part of the continent by the end of the era. Uplift continued until the middle of the Cenozoic Era. The gneiss which emerged in the Taishan region is the foundation for all of North China. Cambrian strata, fully emerged in the north, are rich in fossils. Six streams flow from the summit, their water renowned for its extremely low mineral content, slight acidity (pH = 6.3) and relatively high oxygen content (6.4 milligrams per liter (mg/l).

The area falls within the warm temperate climatic zone. Meterological data are not available.

Vegetation covers 79.9% of the area, which is densely wooded, but information about its composition is lacking. The flora is diverse and known to comprise 989 species, of which 433 species are woody and the rest herbaceous. Medicinal plants total 462 species and include multiflower knotweed, Taishan ginseng, Chinese gromwell and sealwort, which are renowned throughout the country. Some trees are very old and famous, notably the Han Dynasty Cypresses(planted 2,100 years ago by Emperor Wu Di of the Han Dynasty), 'Welcoming Guest Pine' (500 years old) and 'Fifth Rank Pine' (named by Emperor Qin Shi Huang of the [[[Qin Dynasty]] and replanted some 250 years ago).

There are over 200 species of animals in addition to 122 species of birds, but precise details are lacking. Large-scaled fish Varicorhinus macrolepis is found in running water at 300-800 m. Considered a delicacy in the Qing Dynasty, it is one of the five most famous edible fishes in China.

Temple complex at the top of Mount Tai

It has so many reputations from its cultural position. According to historical records, Mount Tai became a sacred place haunted by emperors to offer sacrifices and meditate in the Zhou Dynasty over 1,000 years before the Christian era. A total of 72 emperors were recorded as visiting it. Men of letters also came to acquire inspiration, to compose poems, write essays, paint and take pictures. Hence, a great many cultural relics were left on the mountain.

The Emperor Lord of Mount Tai (Chinese: 东岳大帝; pinyin: Dōngyuè Dàdì) is the supreme god of Mount Tai. According to one tradition, he is a descendant of Pangu.

Bixia Yuanjun (Chinese: 碧霞元君; pinyin: Bìxiá Yuánjūn) also known as the "Heavenly Jade Maiden" (Chinese: 天仙玉女; pinyin: Tiānxian Yùnǚ) or the "Empress of Mount Tai" (Chinese: 泰山娘娘; pinyin: Tàishān Niangniang). According to one of the legends, she is the daughter of the Emperor Lord of Mount Tai. Statues of Bixia Yuanjun often depict her holding a tablet with the Big Dipper as a symbol of her authority.

Songzi Niangniang (Chinese: 送子娘娘; pinyin: Sòngzi Niangniang) is the Goddess of Fertility, like Yanguang Nainai, she is often portrayed as an attendant to Bixia Yuanjun.

The Temple of the God of Mount Tai, known as the Dai Temple (Chinese: 岱庙; pinyin: Dàimiào), is the largest and most complete ancient building complex in the area. It is located at the foot of Mount Tai in the city of Tai'an and covers an area of 96,000 square meters. The temple was first built during the Qin Dynasty. Since the time of the Han Dynasty (206 BC – 220 AD), its design has been a replica of the imperial palace, which makes it one out of three extant structures in China with the features of an imperial palace (the other two are the Forbidden City and the Confucius Temple in Qufu). The temple has five major halls and many small buildings. The centerpiece is the Palace of Heavenly Blessings (Tian Kuang), built in 1008, during the reign of the last Northern Song Emperor Huizong. The hall houses the mural painting "The God of Mount Tai Making a Journey", dated to the year 1009. The mural extends around the eastern, western and northern walls of the hall and is 3.3 metres high and 62 metres long. The theme of the painting is an inspection tour by the god. Next to the Palace of Heavenly Blessings stand the Yaocan Pavilion and the entrance archway as well as the Bronze Pavilion in the northeast corner. The Dai Temple is surrounded by the 2,100 year-old Han Dynasty cypresses. Oldest surviving stair may be 6000 granite steps to the top of the sacred Tai Shan mountain in China

The site contains a number of well-preserved steles from the Huizong reign, some of which are mounted on bixi tortoises. There is a much later, Qianlong-era bixi-mounted stele as well.[5]

The Azure Clouds Temple (Chinese: 碧霞祠; pinyin: BìXiá Cí), near the top of the mountain is another grand building complex, a special combination of metal components, wood, and bricks and stone structures. From the Taishan Temple to the Azure Clouds Temple there are numerous stone tablets and inscriptions and ancient buildings on the way. Visitors derive much pleasure from climbing Mount Taishan. From the red gate at the foot of the mountain to the South Heaven Gate at the top are some 7,000 stone steps, which wind their way up the mountain slopes, each step offering a different view.

A flight of 7,200 total steps (including inner temple steps), with 6,293 Official Mountain Walkway Steps, lead up the East Peak of Mount Tai, along its course, there are 11 gates, 14 archways, 14 kiosks, and 4 pavilions.

Among the tablets and inscriptions on the top of Mount Tai, the inscription that declares Mount Tai the "Most Revered of the Five Sacred Mountains" (simplified Chinese: 五岳独尊; traditional Chinese: 五嶽獨尊; pinyin: Wǔyuè Dúzūn) on the "Sun Viewing Peak" (Chinese: 日观峰; pinyin: Rìguān Fēng) is particularly renown. It was written by a member of the Aisin Gioro clan (Chinese: 爱新觉罗玉构; pinyin: Àixīn Juéluō Yùgòu) in 1907 and is featured on the reverse side of the 5 yuan bill of the 5th series renminbi banknotes. Another inscription marks the "Lu-Viewing Platform" (Chinese: 瞻鲁台; pinyin: Zhānlǔ tái) from which Confucius took in the view over his home state of Lu and then pronounced "The world is small".

The Wordless Stela (Chinese: 无字碑; pinyin: Wúzì Bēi) stands in front of the Jade Emperor Temple. Legend has it that the emperor who commissioned the stela was dissatisfied with the planned inscription and decided to leave it blank instead.

Visitors can reach the peak of Mount Tai via a bus which terminates at the Midway Gate to Heaven, from there a cable car connects to the summit. Covering the same distance on foot takes from two and a half to six hours. The supplies for the many vendors along the road to the summit are carried up by porters either from the Midway Gate to Heaven or all the way up from the foot of the mountain.

To climb up the mountain, one can take one of two routes. The more popular east route starts from Taishan Arch. On the way up the 7,200 stone steps, the climber first passes the Ten Thousand Immortals Tower (Wanxianlou), Arhat Cliff (Luohanya), and Palace to Goddess Dou Mu (Doumugong). The climbing from the First Gate to Heaven (yi1 tian1 men2), the main entrance bordering on Tai'an town, up the entire mountain can take two and a half hours for the sprinting hiker to six hours for the leisure pace. Reaching the Midway Gate to Heaven from First Gate to Heaven is one hour at a sprint up to two and a half hours leisurely. To the northeast of the Palace to Goddess Dou Mu is Sutra Rock Valley in which the Buddhist Diamond Sutra was cut in characters measuring fifty centimeters across believed to be inscribed in the Northern Wei Dynasty. The west route, taken by fewer tourists, is more scenic, but has less cultural heritage. 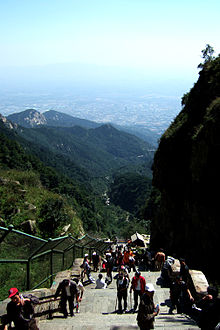