The Yokosuka (横須賀?) D4Y Suisei (彗星, "Comet"?) was a dive bomber of the Imperial Japanese Navy. Its Allied reporting name was "Judy". The D4Y was one of the fastest dive-bombers in the entire war, and only the delays in its development hindered its service, while its predecessor, the more robust but slower Aichi D3A remained in service for years. Despite this limited use, the speed and the range of the D4Y was nevertheless valuable, and the type was used with success as reconnaissance aircraft as well as in kamikaze missions.

Development of the aircraft began in 1938 at the Yokosuka Naval Air Technical Arsenal as a carrier-based dive bomber to replace the Aichi D3A. The design was heavily influenced by the Heinkel He 118 dive bomber, a He 118 was provided by Nazi Germany and the Japanese had bought its production rights.[1]

The aircraft was a single-engine, all-metal low-wing monoplane, with a wide-track retractable undercarriage and wing-mounted dive brakes. It had a crew of two: a pilot and a navigator/radio-operator/gunner, seated under a long, glazed canopy which provided good all-round visibility. The pilot of bomber versions was provided with a telescopic bombsight.[2] The aircraft was powered by an Aichi Atsuta liquid-cooled inverted V-12 in-line engine, a licenced copy of the German DB 601, rated at 895 kW (1,200 hp). The radiator was behind and below the three-blade propeller, as in the P-40.

It had a slim, elegant fuselage that enabled it to reach high speeds in horizontal flight and in dives, while low wing loading gave excellent maneuverability, with the Suisei having superior performance than contemporary dive bombers such as the SB2C Helldiver.[3] In order to conform with the Japanese Navy's doctrine of ensuring that its aircraft could outrange potential enemies, weight had to be minimized with the result that the D4Y was not fitted with self-sealing fuel tanks or armour.[4] In consequence, the D4Y was extremely vulnerable and tended to catch fire when hit.

Bombs were fitted under the wings and in an internal bomb bay, something rare in a single-engine aircraft. It carried one 500 kg (1,100 lb) bomb, but there were reports that the D4Y sometimes carried two 250 kg (550 lb) bombs, for example during the attack on the light aircraft carrier USS Princeton. Only 30 kg (70 lb) bombs were carried externally. The aircraft was armed with two 7.7 mm (.303 in) machine guns in the nose, and one 7.92 mm (.312 inm) Type 1 machine gun in the rear of the cockpit. (The 7.92 mm/.312 in was carried because of its higher rate of fire.) Later, the 7.92 mm (.312 in) was replaced by a 13 mm (.51 in) Type 2 machine gun. This light gun armament was typical for a Japanese carrier-based bomber. The forward machine guns were retained in the kamikaze version.

The first D4Y1 prototype made its maiden flight in December 1940.[5] After the prototype's successful trials, development continued, and the first problems appeared. During dive-bombing trials, the wings of the D4Y started to flutter, a fatal flaw for an airframe subject to the stresses of dive bombing. Because of this, initial production aircraft were used as reconnaissance aircraft, as the D4Y1-C, which took advantage of its high speed and long range, while not over-stressing the airframe.[3] Production of the D4Y1-C continued in small numbers until March 1943, when the increasing losses incurred by the D3A resulted in production switching to the D4Y1 dive-bomber,[4] the aircraft's structural problems finally being solved. Although the D4Y could operate successfully from the large and fast fleet carriers that formed the core of the Combined Fleet at the start of the war, it had problems operating from the smaller and slower carriers such as the Hiyō class which formed a large proportion of Japan's carrier fleet after the losses received in the Battle of Midway. Catapult equipment was therefore fitted, giving rise to the D4Y-1 Kai (or improved) model.[4]

These early versions of the D4Y were difficult to keep in service because the Atsuta engines were unreliable and difficult to maintain in front-line service. From the beginning, some had argued that the D4Y should be powered by an air-cooled radial engine, a type Japanese engineers - and maintenance crew - had experience with and trusted. The aircraft was therefore fitted with the reliable Mitsubishi MK8P Kinsei 62, a 14-cylinder two-row radial engine. This version was the Yokosuka D4Y3 Model 33.

Although the new engine improved ceiling and rate of climb (over 10,000 m/32,800 ft, and climb to 3,000 m/9,800 ft in 4.5 minutes, instead of 9,400 m/30,800 ft and 5 minutes), the higher fuel consumption resulted in shorter range and a slower cruising speed, while the bulky engine obstructed the forward and downward view of the pilot, hampering carrier operations. These problems were tolerated because of the increased availability of the new variant.[6]

The last version was the D4Y4 Special Strike Bomber. This one-seat kamikaze aircraft, capable of carrying one 800 kg (1,760 lb) bomb, was put into production in February 1945. It was equipped with three RATO boosters for terminal dive acceleration.[7] This aircraft was an almost ideal kamikaze model: it had a combination of speed (560 km/h/350 mph), range (2,500 km/1,550 mi) and payload (800 kg/1,760 lb) probably not matched by any other Japanese aircraft.

The D4Y5 Model 54 was a planned version designed in 1945. It was to be powered by the Nakajima NK9C Homare 12 radial engine rated at 1,361 kW (1,825 hp), would have a new four-blade metal propeller of the constant-speed type, and would have more armour protection for the crew and fuel tanks.

Ultimately, 2,038 of all variants were produced, mostly by Aichi.[8]

Lacking armor and self-sealing fuel tanks, the Suiseis did not do well against Allied fighters. They did, however, cause considerable damage to ships, including the carrier USS Franklin, which was nearly sunk by a single D4Y.

The D4Y1-C reconnaissance aircraft entered service in mid-1942, when two of these aircraft were deployed aboard Sōryū at the Battle of Midway, where both were lost when Sōryū was sunk.[4]

During the Battle of the Marianas, the D4Ys were engaged by U.S. Navy fighters and shot down in large numbers. The D4Y was faster than the F4F Wildcat, but not the new F6F Hellcat. The Japanese aircraft were adequate in 1943, but the rapid advances in American materiel in 1944 (among them, the introduction in large numbers of the Essex-class aircraft carrier) left them behind, while their inexperienced pilots were another disadvantage.

The U.S. Task Force 58 struck the Philippine airfields and destroyed the land air forces first, before engaging the Japanese naval aircraft. The result was what the Americans called "The Great Marianas Turkey Shoot", with 400 Japanese aircraft shot down in a single day. A single Hellcat pilot, Lieutenant Alexander Vraciu, shot down six D4Ys within a few minutes. 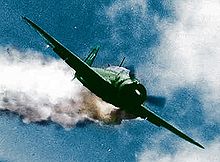 Lt. Yoshinori Yamaguchi's D4Y3 in the suicide dive against USS Essex, 1256 hours, 25 November 1944. Air brake flaps are extended, the burning port wing tank is trailing smoke. The lack of self-sealing fuel tanks made the D4Y easy to ignite with a few rounds of incendiary tracers, so a stricken Suisei often developed a fiery tail reminiscent of its namesake. Note white "17" on the vertical tail fin.

The D4Y was relegated to land operations where both the liquid-cooled engine D4Y2, and the radial engine D4Y3 fought against the U.S. fleet, scoring some successes. An unseen D4Y bombed and sank the Princeton on 24 October 1944. D4Ys hit other carriers as well, by both conventional attacks and kamikaze actions. In the Philippines air battles, the Japanese used kamikazes for the first time, and they scored heavily. D4Ys from 761 Kokutai may have hit the escort carrier USS Kalinin Bay on 25 October 1944, and the next day, USS Suwannee. Both were badly damaged, especially Suwannee, with heavy casualties and many aircraft destroyed. A month later on 25 November, USS Essex, Hancock, Intrepid and Cabot were hit by kamikazes, almost exclusively A6M Zero fighters and D4Ys, with much more damage. D4Ys also made conventional attacks. All these D4Ys were from 601 and 653 Kokutai.

In defence of the homeland

Task Force 58 approached southern Japan in March 1945 to strike military objectives in support of the invasion of Okinawa. The Japanese responded with massive kamikaze attacks, codenamed Kikusui, in which many D4Ys were used.

Carriers USS Enterprise and Yorktown were damaged by D4Ys of 701 Wing on 18 March. On 19 March, the carrier Franklin was hit with two bombs from a single D4Y, which then escaped despite heavy anti-aircraft fire. Franklin was so heavily damaged that she was retired until the end of the war. Another D4Y hit the carrier USS Wasp.

During Kikusui N.6, on 11 May 1945, USS Bunker Hill was hit and put out of action by two kamikazes that some sources identify as D4Ys. This was the third Essex-class carrier forced to retire to the States to repair.

The D4Y was actually faster than the A6M Zero. Some were employed as D4Y2-S night fighters against the high flying B-29 Superfortress bombers late in the war, a unique role for a single-engine dive bomber. The night fighter conversions were made at the 11th Naval Aviation Arsenal at Hiro. Each D4Y2-S had all bomb equipment removed and a 20 mm Type 99 Model 2 cannon with its barrel slanting up and forwards (similar to the German Schräge Musik system) installed in place of the gunner's cockpit. However, the lack of radar for night operations and slow climb rate, combined with the B-29's high ceiling, made the D4Y2-S ineffective as a night fighter. Little is known of their operations.

At the end of the war, there were still D4Ys in action against the U.S. Navy, and maybe the last of them were the eleven D4Ys that set off on a search mission on 15 August 1945. Led by Vice Admiral Matome Ugaki, all but three were shot down or crashed into the sea.

A D4Y3 (Type 33) at NAS Anacostia is tested by U.S. Navy personnel of the TAIC (Technical Air Intelligence Center) after the war. 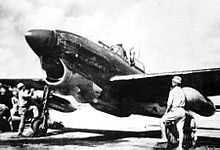 The only surviving D4Y is located at Yasukuni Jinja Yūshūkan in Tokyo. One is currently being restored at the Planes of Fame museum in Chino, Ca, USA. 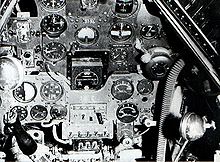 Instrument panel of a Yokosuka D4Y4

Data from The Encyclopedia of World Aircraft[8]