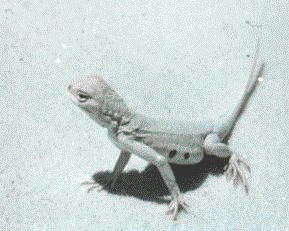 "Holbrookia" is a of known commonly as the lesser earless lizards which contains four recognized that are found throughout the southern and central , and northern . They are characterized by having no external ear openings, presumably to prevent sand from entering the body when they are digging. The name "holbrookia" is in honor of American zoologist, . [http://ebeltz.net/herps/biogappx.html]

Lesser earless lizards grow to approximately 2-2.5 inches in length, with a 3-4 inches of . They are typically grey or tan in color, with black blotching. The males usually have blue patches on either side of their belly, whereas the females do not, and females will often change to have bright orange patches when .

"Holbrookia" species are diurnal, basking s. They spend the vast majority of their time sunning on rocks, even in the heat of the day. Up until the surface temperature reaches approximately 104 °F, when they will retreat to a rock crevice or burrow. They are insectivorous.