Personal grooming
For other types of grooming see Groom 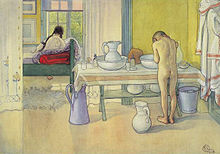 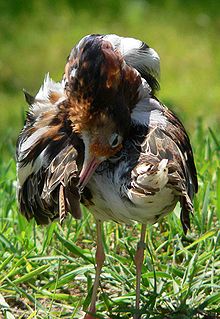 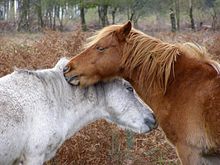 Personal grooming (also called titivating and preening) is the art of cleaning, grooming, and maintaining parts of the body. It is a species-typical behavior that is controlled by neural circuits in the brain.

Grooming in humans typically includes bathroom activities such as primping: washing and cleaning the hair, combing it to extract tangles, and styling. It can also include cosmetic care of the body and removal of the pubic and axillary hair for women and shaving of the beard for men. Another suitable alternative to shaving is beard grooming. Growing and maintaining requires less effort than being shaven.

Individual animals regularly clean themselves and put their fur, feathers or other skin coverings in good order. This activity is known as personal grooming, a form of hygiene. Extracting foreign objects such as insects, leaves, dirt, twigs and parasites[1] , are all forms of grooming. Among animals, birds spend considerable time preening their feathers. This is done to remove ectoparasites, keep them in good aerodynamic condition, and waterproof them. To do that, they use the preen oil secreted by the uropygial gland, the dust of down feathers, or other means such as dust-bathing or anting. During oil spills, animal conservationists that rescue penguins sometimes dress them in knitted sweaters to stop them from preening and thereby ingesting the mineral oil which is poisonous. Felidae cats are well known for their extensive grooming. One reason advanced for such grooming is to remove all traces of blood and other matter so as to not alert prey with the scent. Cats groom so much that they often produce hairballs from the fur they ingest.

Grooming as a social activity

Many social animals adapt preening and grooming behaviors for other social purposes such as bonding and social structure enforcement.

In human kind, mutual grooming is quite related to social grooming, which is defined as the process by which human beings fulfill one of their basic instincts, such as socializing, cooperating and learning from each other.[2] Research conducted by Holly Nelson (from the University of New Hampshire) and Glenn Geher (State University of New York at Platz), individuals who chose their romantic partner reported more mutual grooming than others who focused in other types of relationships. Hence, this study hypothesized that mutual grooming was related to relationship satisfaction, trust and previous experience of affection within the family. They claim that even though humans do not groom each other with the same fervor that other species do, they are groomers par excellence. Therefore, human mutual grooming plays an important role in pair bonding. In the same investigation, researchers found that individuals with more promiscuous attitudes and those who scored high on the anxiety sub-scale on an adult attachment style measure, tend to groom their partners more frequently. These findings were also consistent with some of the functions of grooming: potential parental indicator, developing trust and courtship or flirtation.[3]