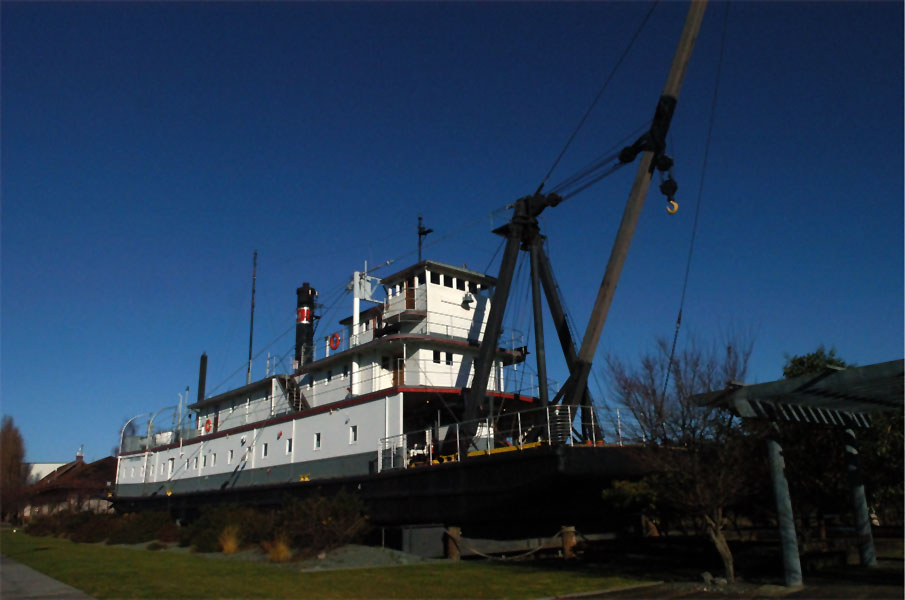 caption = The W.T. Preston in its dry berth in Anacortes, WA.
location= Anacortes waterfront, R Avenue, at foot of 7th Street, ,
lat_degrees = 48 | lat_minutes = 30 | lat_seconds = 58.92 | lat_direction = N
long_degrees = 122 | long_minutes = 36 | long_seconds = 29.01 | long_direction = W
area =
built =1929 (re-hulled in 1939)
architect= Lake Union Drydock Co.
architecture= Welded Barge Hull, Wooden Super Structure,
designated= , The "W.T. Preston" is a specialized sternwheeler that operated as a , removing log jams and natural debris that prevented river on several -area rivers from Olympia up to Blaine, including the Skagit, Stillaguamish, and Snohomish rivers. Dead trees that reached Puget Sound often became half-submerged "deadheads" that could pierce the hulls of wooden vessels. The federal government began building snagboats to remove obstructions and facilitate river based commerce. The "W.T. Preston" was named in honor of the only civilian engineer to work for the at the time of her construction in . The "Preston" used the main single expansion reciprocating steam engines, as well as many pumps and other hardware from the first snagboat to work the rivers of the Puget Sound, her 1882 predecessor, the "Skagit".

The 163-foot, wooden-hulled vessel pulled , performed light dredging, and otherwise worked the waters of Puget Sound until ; when, the Army Corps of Engineers built a new atop a welded steel hull and transferred the stern wheel, main engines, , foredeck equipment, and other items onto the second "W.T. Preston". The mission of the "W.T. Preston" changed throughout the years. As rivers were used less and less for transportation of goods, the "Preston" began to dredge, fight fires, and perform other general work. Throughout her commission, she even retrieved a sunken military bomber, and several automobiles.

The US Army Corps of Engineers operated the "Preston" out of the Locks, in , . This boat served the Puget Sound for more than forty years before the Army Corps retired her in . Her replacement, the "Puget", still operates today out of Preston's previous dock at the Hiram M. Chittenden Locks.

The "W.T. Preston" is now permanently dry berthed on the waterfront near Cap Sante, in . The vessel is a and remains officially a designated city historic landmark in Seattle (its former location). The ship now operates as a history museum, and is owned and operated by the City of Anacortes' City Museum. In 2005, the Snagboat Heritage Center was built just North of the Preston. This interpretive center houses artifacts, models, maps and other historical text and information about the snagboats which maintained the area's navigable waterways.