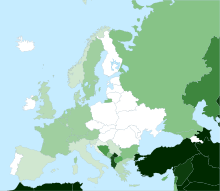 Eurabia is a conspiracy theory[2] about the alleged Arabization and Islamization of Europe, and the European leaders' alleged capitulation to Islamic influences.[3]

Eurabia was originally the title of a newsletter published by the Comité européen de coordination des associations d'amitié avec le monde Arabe.[4] According to Bat Ye'or, it was published collaboratively with France-Pays Arabes (journal of the Association de solidarité franco-arabe or ASFA), Middle East International (London), and the Groupe d'Etudes sur le Moyen-Orient (Geneva).[5] During the 1973 oil crisis, the European Economic Community (predecessor of the European Union), had entered into the Euro-Arab Dialogue (EAD) with the Arab League.[6] Bat Ye'or later used the journal title Eurabia in her books.

In her book Eurabia: The Euro-Arab Axis, Bat Ye'or claims that Eurabia is the result of the French-led European policy originally intended to increase European power against the United States by aligning its interests with those of the Arab countries. She claims it as a primary cause of European hostility to Israel, referring to joint Euro-Arab foreign policies that she characterizes as anti-American and anti-Zionist.[7] The term is generally used in combination with "dhimmitude", a term described as a myth[8][9][10], denoting an alleged attitude of concession, surrender and appeasement towards Islam. Her definition of Eurabia is:

In 2006, according to MEMRI,[19] Libyan leader Muammar Gaddafi delivered a speech predicting Europe would become a Muslim continent in a "few decades".[20][21][22] Geert Wilders reiterated Gaddafi's prediction that Europe will become Muslim and said "for once in his life, Gaddafi was telling the truth."[23]

Ayaan Hirsi Ali proposes treating radical Islam like Nazism. Domestically, she proposes monitoring the Muslim population, and registering the religious identities of criminals who target women, Jews or homosexuals. She also seeks to ban all Muslim faith schools. She believes all new immigrants should pledge allegiance to the constitution and should be deported immediately if they "break it". Internationally she proposes reduction of the dependance on oil (by way of developing alternate energy).[24]

2083: A European Declaration of Independence, the manifesto of Anders Behring Breivik, the perpetrator of the 2011 Norway attacks, includes a lengthy discussion of and support for the "Eurabia" theory.[25] As a result, the theory received widespread mainstream media attention following the attacks.[26]

In 2009, an anonymously-created video proposing the thesis of Eurabia was uploaded to YouTube, with the title "Muslim Demographics". The video become a YouTube hit with 10 million views. The BBC Radio 4 debunked the YouTube-video by presenting published population figures and statistics in a video named "Muslim Demographics: The Truth".[27][28][29][30]

The Economist, acknowledging that integration of immigrants was a difficult process, nevertheless rejected the concept of Eurabia as "scaremongering".[31] Simon Kuper in Financial Times described Ye'or's book as "little-read but influential", and akin to "Protocols of the Elders of Zion in reverse", adding that "though ludicrous, Eurabia became the spiritual mother of a genre", but grants that "mixed with the hysteria are kernels of truth."[32] In another article, Kuper wrote that most academics who have analysed the demographics dismiss the predictions that the EU will have Muslim majorities.[33]

According to Marján and Sapir, the very idea of "Eurabia" is "based on an extremist conspiracy theory, according to which Europe and the Arab states would join forces to make life impossible for Israel and Islamize the old continent."[34]

Scholar Matt Carr writing in Race & Class expressed his concern that the theory of Eurabia had moved from "an outlandish conspiracy theory" to a more mainstream and "dangerous Islamophobic fantasy". He observes that Ye'or's "book has been well received, not only by established heralds of the Islamic threat, such as Melanie Phillips, Daniel Pipes and Oriana Fallaci, but by respected historians such as Niall Ferguson and Churchill’s biographer Martin Gilbert, who, whatever their political views, might at least be expected to recognise the absence of historical discipline or methodology when they see it." Carr then seeks to answer "What does the popularity of Eurabia in this circle reveal and what ideological function does it serve?", proposing that "On the one hand, Eurabia is a paranoid fantasy, which recalls the way that ‘international communism’ was perceived during the cold war. But, like the communist threat, it is also a politically convenient fantasy, particularly in the US, where Bat Ye’or’s theses have been well-received by the advocates of ‘permanent war’ against ‘militant Islam’. [...] At the same time, the depiction of a corrupt European political class secretly colluding with Islam is a variant on the neocon notion of ‘Old Europe’, whose supposed appeasement of terrorism contrasts with the ‘moral clarity’ emanating from the US. Last but not least, Eurabia also serves to legitimise the broader neocon social and economic agenda, since Europe’s coming demise is partly perceived to be the result of an ageing European population’s fatal addiction to an ‘unsustainable’ social model based on high pensions, early retirement and social security benefits."[35]

Justin Vaisse, co-author of Integrating Islam Political and Religious Challenges in Contemporary France, seeks to discredit what he calls, "four myths of the alarmist school," using Muslims in France as an example. Specifically he wrote that the Muslim population growth rate was lower than that predicted by Eurabia, partly because the fertility rate of immigrants declines with integration.[36] He further points out that Muslims are not a monolithic or cohesive group,[37] and that many Muslims do seek to integrate politically and socially. Finally, he wrote that despite their numbers, Muslims have had little influence on French foreign policy.[38]

David Aaronovitch writes that the proponents of Eurabia confuse Islamists with mainstream Muslims. He acknowledges that the threat of "jihadist terror" may be real, but that there was no threat of Eurabia. Aaronovitch concludes that those of study conspiracy theories will recognize Eurabia to be a theory that combines the Sad Dupes thesis to the Enemy Within idea.[39]

The Eurabia theory has been compared by British columnist Johann Hari to historically antisemitic writing. He calls the two "startlingly similar" and says that "there are intellectuals on the British right who are propagating a conspiracy theory about Muslims that teeters very close to being a 21st century Protocols of the Elders of Mecca."[40]

In his book Wars of Blood and Faith, US military analyst Ralph Peters states that far from being about to take over Europe through demographic change, "Europe's Muslims are living on borrowed time" and that in the event of a major terrorist attack in Europe, thanks to the "ineradicable viciousness" of Europeans and what he perceives as a historical tendency to over-react to real or perceived threats, European Muslims "will be lucky if they're only deported."[41]

Waleed Aly, in an article published in The Age (Melbourne), responding to Raphael Israeli's call for controls limiting Muslim immigration to Australia (lest a "critical mass" develop) observed that Raphael Israeli's comments are a cause for concern "because they are not as marginal as they are mad." Aly continues that Israeli's latest book "is an unoriginal appropriation of the 'Eurabia' conspiracy thesis of Jewish writer Bat Ye'or: that Europe is evolving into a post-Judeo-Christian civilisation increasingly subjugated to the jihadi ideology of Muslim migrants" and that the theory has received "enthusiastic support" from intellectuals in Europe and activists in the USA.[42]