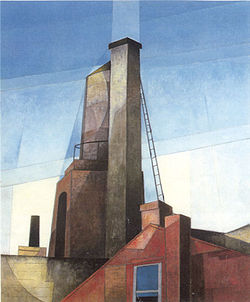 Precisionism, also known as Cubist Realism,[1] was an artistic movement that emerged in the United States after World War I and was at its height during the inter-War period. The term itself was first coined in the early 1920s.

Influenced strongly by Cubism and Futurism, its main themes included industrialization and the modernization of the American landscape, which were depicted in precise, sharply defined, geometrical forms. The themes originated from the streamlined architecture and machinery of the early 1900s.[2] Precision artists considered themselves strictly American and tried to avoid European artistic influences.[3] There is a degree of reverence for the industrial age in the movement, but social commentary was not fundamental to the style. The degree of abstraction in the movement ranged considerably from Charles Demuth's famous The Figure 5 in Gold from 1928; to Charles Sheeler's work that sometimes verged on the photorealistic. In addition to his paintings Charles Sheeler also created photographs of factories and industrial buildings as did his friend the photographer Paul Strand.[4] 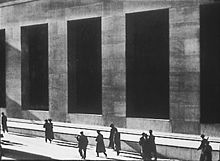 Elsie Driggs, Francis Criss, Charles Demuth, Edward Hopper, Charles Sheeler, Herman Trunk and Georgia O'Keeffe were prominent Precisionists. George Ault,[5] Ralston Crawford, Preston Dickinson, Louis Lozowick, Gerald Murphy, Niles Spencer, Joseph Stella, Stuart Davis[6] Peter Blume, Virginia Berresford, Henry Billings John Storrs, and Miklos Suba, Francis Criss, and the photographer Paul Strand were other artists associated with the hard-edged style of Precisionism. The movement had no presence outside the United States, and although no manifesto was ever created, the artists themselves were a close group who were active throughout the 1920s and 1930s, and exhibited together. Georgia O'Keeffe, especially with paintings like New York Night, 1928-29, remained connected to Precisionist ideals until the 1960s, although her best-known works are not closely related to Precisionism, and it would be inaccurate to state that O'Keeffe was entirely aligned with Precisionism. Her husband, photographer Alfred Stieglitz, was a highly regarded mentor for the group.

Precisionist artists have also been referred to as "Cubist-Realists", "Sterilists", and "Immaculates". Their art would have an influence on the magic realism and pop art movements.