Mountain View Station, signed on the platform as Mountain View–Wayne, is a station maintained by New Jersey Transit in Wayne, New Jersey. The station is located on the Montclair-Boonton Line, a merge of the Boonton Line and Montclair Branch in 2002. Prior to the Montclair Connection in 2002,[2] the station was served by the Boonton Line. The station maintains one high-level side platform for the lone revenue service track. The station is located on Erie Avenue, just off of U.S. Route 202 and New Jersey Route 23 in downtown Wayne. Since January 2008, Mountain View station is the second of two stations in Wayne, the other being the Wayne Route 23 Transit Center, a station off the Westbelt interchange.[3] The station boasts 389 parking spaces on four different lots maintained by New Jersey Transit throughout Wayne. Bike lockers are also available.

The station is located in New Jersey Transit's ninth fare zone (along with Wayne Route 23), costing $9.25 for a one-way ticket to New York Penn Station in Midtown Manhattan. For a one-way ticket from New Jersey Transit's Hoboken Terminal, the cost is reduced by one dollar to $8.25. The station has one bus line servicing it, the No. 871, a former Morris County Metro Bus Line. Mountain View is accessible for handicapped persons under the Americans with Disabilities Act of 1990. As of the November 7, 2010, five inbound (to New York/Hoboken) trains stop at Mountain View on weekday mornings, while ten outbound trains (from New York/Hoboken) stop on weekday afternoons/evenings. There is no weekend service to Mountain View, as all service terminates at Bay Street station in Montclair, New Jersey. However, during holidays, three of extra trains heading to Lake Hopatcong stop at Mountain View along with three heading to Hoboken Terminal. Trains continuing northbound next stop at Lincoln Park Station in its namesake town of Lincoln Park. 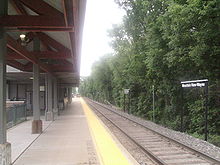 The Mountain View station facing southbound from the platform

Mountain View station has a large station complex, consisting of four parking lots maintained by New Jersey Transit totaling up to 389 parking spaces, eight of which are handicap-accessible. These lots comprise of the main station lot, which has 228 parking spaces on Erie Avenue. All eight handicap spaces are located in that lot. The second lot has seventeen spaces located at Williams Street and Greenwood Avenue. A third lot is also located on this block, consisting of 26 spaces. A fourth and final parking lot is present on Greenwood Avenue near New Jersey Route 23, which makes up the final 118 spaces. There is no parking fee for any of the four lots.[4] The station receives bus service from one line, the No. 871, which was one of the Morris County Metro lines.[5][6]

Train service to Mountain View is limited to rush hour trains. On weekday mornings, heading to Hoboken Terminal and/or New York Pennsylvania Station, Mountain View sees only five trains in three hours, running from 6:15 am to 9:25 am. On weekday afternoons, heading away from Hoboken and/or New York, Mountain View sees ten trains in ten hours, starting at 3:23 pm and ending at 1:46 the next morning. A transfer for each train is required at Montclair State University Station to approach Mountain View. No weekend service is provided to Mountain View, as Montclair-Boonton line weekend service ends at Bay Street station in Montclair. Six special holiday trains that run to Lake Hopatcong station do stop at Mountain View. There is a ticket vending machine available. Tickets cost $9.25 to go to New York Pennsylvania Station and $8.25 to go Hoboken Terminal.[5]

The Mountain View station was one of two stations in Wayne built on the New York and Greenwood Lake Railway, run by the Erie Railroad. The line ran from the Erie's Pavonia Terminal in Jersey City to Sterling Forest station on the New Jersey / New York state line. There was a second station constructed in Wayne, north of Mountain View at the Ryerson Avenue crossing.[7] In 1935, train service was cutback to Wanaque-Midvale station in Wanaque, New Jersey. After the Erie Railroad and Delaware, Lackawanna and Western Railroad merged in October 1960, plans started in 1963 to abandon the former Lackawanna Boonton Branch, a freight railroad built in 1869. This line also had a second Mountain View station. That year, the Erie-Lackawanna Railroad tied the Boonton Line and Greenwood Lake lines together at Mountain View Junction. The portion of the Boonton Branch east of the junction was abandoned and the Greenwood Lake was reduced to shuttle service north of Mountain View.[8]

At that time, the wooden station depot at Mountain View built by the Erie was demolished and replaced by an Armco metal building on the platform, which boasted two tracks. One track served as the new Boonton Line, which turned westward to Lincoln Park. The other track served as the transfer for the now Wanaque-Midvale shuttle, serving the old Greenwood Lake north of Mountain View, including the Ryerson Avenue station. The shuttle service was discontinued in October 1966, along with the Ryerson Avenue station.[8] The track was torn up south of Pequannock and as a result, the station shelter and canopy resides on the old shuttle track. The track redirected onto the Boonton Branch is still in use and is the lone track through Mountain View. 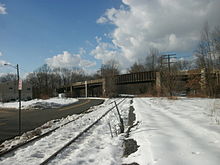 A second Mountain View station, this one on the Lackawanna line from Hoboken on the Boonton Branch, once stood near the Parish Drive bridge, behind the PAL facility. Evidence of the freight house platforms, stairways, track dividers, etc are still visible.[9] This station had passenger rail service until the 1963 realignment project. The Morris Canal passed through the western most bridge pier of the Parish Drive overpass.