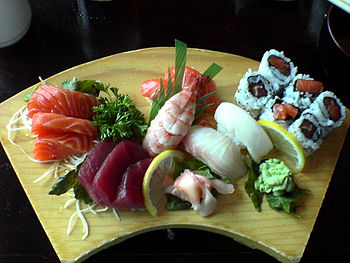 Sushi plate (盛り合わせ) with sashimi to the left

There are many sushi and sashimi ingredients, some traditional and some contemporary. 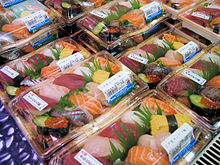 Packaged nigirizushi for sale at a Tokyo supermarket 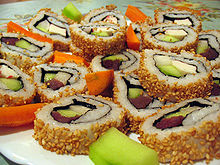 California Roll is a contemporary style maki-zushi (roll) containing cucumber, cooked crab meat or an imitation, and avocado that is made inside-out (Uramaki) with rice on the outside and an outer layer of tobiko or sesame seeds, shown here with a similar maki-zushi with raw tuna, which is darker
Main article: Sushi

All seafoods in this list are served raw unless otherwise specified. 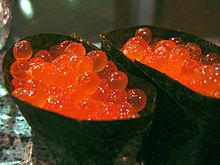 Roe is a mass of fish eggs: