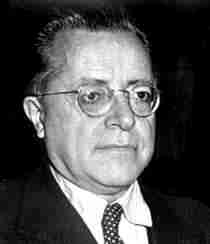 Born in to a middle class family, Togliatti began his political life in the prior to the First World War. He served as a volunteer officer during the war, and was wounded in action and sent home for illness. Returning at the end of the conflict, he was a part of the group around 's "" paper in , while working as a .

He was a founding member of the (PCd'I, later PCI) and, after Gramsci was jailed by 's Fascist regime, he became the senior leader of the PCd'I until his death, for which he also directed "Il Comunista".

When the party was banned by the Italian Fascist government in 1926, Togliatti was one of few leaders not to be arrested, as he was attending a meeting of the in . In exile during the late 1920s and the 1930s, he organized clandestine meetings of the PCd'I at (1926) and (1931). In 1927 he took the position of Secretary of the party.

In 1935, under the "nom de guerre" "Ercole Ercoli", he was named member of the secretariat of the Comintern. In in 1937, during the Civil War, he willingly contributed to the elimination of anarchists and Trotskyists by the Catalan Communist leaders (carried out on the orders of ). In 1939 he was arrested in France: released, he moved to the and, remained there during , broadcasting radio messages to Italy, in which he called for resistance to and the .

He returned to his native country in 1944 and it was under his direction that the PCI carried out the "svolta di Salerno", the " Turn" &mdash; this change in policy was the turn of the party to support of democratic measures of reform in Italy (the ), and the refusal to engage in for the cause of Socialism. In effect, the turn moved the party to the right, in contrast with many demands from within; it also meant the disarmament of those members of the that had been organized by the PCI. Togliatti briefly served as Justice Minister.

After having been in the government, he acted as vice-premier under in 1945. In opposition with the dominant line in his own party, he voted for the including of the in the Italian Constitution. At the 1946 general election, the PCI obtained 19% of the votes and 104 seats.

Communist ministers were evicted during the . The same month, , head of the (PCF), was forced to quit 's government along with the four others communist ministers. As in Italy, the PCF was very strong, taking part in the alliance ("Tripartisme") and scoring 28.6% at the November 1946 elections.

In 1948, Togliatti led the PCI in the first democratic election after . [ [http://jcgi.pathfinder.com/time/magazine/article/0,9171,798374,00.html How to Hang On] , Time, April 19, 1948] He lost to the Christian Democrat party (DC – ) after a violent campaign in which the United States, viewing him as a enemy, played a large part. [ [http://jcgi.pathfinder.com/time/magazine/article/0,9171,798522,00.html The Battle Continues] , Time, May 3, 1948] The , which had just been created, allegedly massively interfered in the elections. Allied with the PSI in the , the left-wing achieved 31% of the votes. Until 1996, the left-wing coalition was unable to prevail in the national political elections, while scoring many successes in local administrative elections. The only tentative to include the PCI in government, under 's leadership, through the , ended up with 's 1978 assassination. In 2000, the left-of-center coalition released a report explicitly accusing Washington of having followed a in Italy "to prevent the PCI, and in a lesser measure the PSI, of acceding to power."

On 1948, Togliatti was shot three times, being severely wounded &mdash; his life hung in the balance for days and news about his condition was uncertain, causing an acute political crisis in Italy (which included a called by the ). [ [http://jcgi.pathfinder.com/time/magazine/article/0,9171,887830,00.html Blood on the Cobblestones] , Time, July 26, 1948]

Under his leadership, the PCI became the second largest party in Italy, and the largest non-ruling in . Although permanently in the opposition at the national level during Togliatti's lifetime, the party ran many municipalities and held great power at the local and regional level in certain areas.

In 1953, he fought against the so-called "cheat or swindle law", an electoral one voted by the Christian Democracy-led majority of the time, which aimed at using first past the post to augment the center-right's power. Ultimately, the law was to prove of no use for the government in the elections of that year, which won Togliatti's PCI 22.6% of the vote; it was repealed in November of 1953.

Despite his allegedly tight relationship with , Togliatti's leadership remained unscathed after the (which was everywhere else a cause for major conflicts within the left). He coined the development of the theory (unity in diversity within the communist parties in all countries). In the 1958 elections, the number of Communist votes was still on the rise. In the 1963 elections, the PCI gained 25.2% of the votes, but again failed to reach a relative majority.

Togliatti died as a result of while vacationing with his companion in , then in the Soviet Union. According to some of his collaborators, Togliatti was travelling to the Soviet Union in order to give his support to 's election as 's successor at the lead of . His favourite pupil, , was later elected as his successor to the National Secretary of the PCI position, though Berlinguer's time in office saw the rejection of some policies advocated by Togliatti.

The n city of Stavropol-on-Volga, where Togliatti had been instrumental in establishing the ("Lada") automobile manufacturing plant in collaboration with , was renamed in his honor in 1964, after his death.

Togliatti has been heavily criticised by many Italian historians for not having condemned the Soviet suppression of the democratic uprising in . His politics have been defined as Machiavellian and cynical in purpose, aimed mainly at securing the growth of the PCI (and that of Communism in general).

He has been also criticized for his alternate relations with the maverick Yugoslav leader , which were considered to be closely following the dictated from the Kremlin.

The same has been said of Togliatti's judgement of Stalin's policies: after the communist leader's death in 1953, he had stated that "Joseph Stalin is a titan of thought. His name is to be given to an entire century...". Later on, in 1956, after the de-Stalinization process, he had declared that: "Stalin has disseminated false and exaggerated theses, and was victim of an almost desperate perspective of endless persecution". In the following year, Togliatti repeatedly stated that he had been unaware of Stalin's crimes. The "Italian road to Socialism" he propounded from that moment moved the Italian Communist Party to more democratic and independent positions, which would lead to events such as the PCI's condemnation of the Soviet invasion of Czechoslovakia in a famous speech given by Enrico Berlinguer in Moscow.

Despite such contradictions, Togliatti is widely ranked among the creators of Republican Italy and of its Constitution. He always strove for a certain collaboration with the other main party of Italy, Christian Democracy, and, while still recovering from his wounds in 1948, he had invited the rioting workers to respect the democratic institutions of the country.