Military Sealift Command ships are civilian manned, and are referred to be as being in service, rather than in commission. Some, owned by the United States government, have the prefix USNS, standing for United States Naval Ship, whilst others, on charter or equivalent, are simply the normal merchant MV or SS. Their hull numbers have the prefix T- in addition to the normal hull number that an equivalent commissioned ship in the USN would have.

Four programs comprise Military Sealift Command: Sealift, Naval Fleet Auxiliary Force (NFAF), Special Mission, and Prepositioning. The Sealift program provides the bulk of the MSC's supply-carrying operation and operates tankers for fuel transport and dry-cargo ships that transport equipment, vehicles, helicopters, ammunition, and supplies. The NFAF’s role is to directly replenish ships that are underway at sea, enabling them to deploy for long periods of time without having to come to port. The Special Mission program operates vessels for unique military and federal government tasks, such as submarine support and missile flight data collection and tracking. The Prepositioning program sustains the US military's forward presence strategy by deploying supply ships in key areas prior to actual need.

The United States Military Sealift Command has the responsibility for providing sealift and ocean transportation for all US military services as well as for other government agencies. It is a component of the United States Navy, reporting to Fleet Forces Command (USFFC). Military Sealift Command is also one of three component commands reporting to U.S. Transportation Command (USTRANSCOM).

Military Sea Transportation prior to 1949

As early as 1847, both the U.S. Army and U.S. Navy chartered American merchant ships separately. Following the Mexican-American War, Brigadier General Thomas S. Jesup, Quartermaster of the Army, recommended that the Navy be given responsibility for all water transportation requirements for the military. However, each service managed their own sea transportation throughout the nineteenth century and both World Wars.

On 15 December 1948, the Secretary of Defense James Forrestal issued a statement, "all military sea transport including Army transports would be placed under Navy command." Issues with funding held up the transfer of the functions to the Navy. The new Secretary of Defense, Louis Johnson, issued a memorandum on 12 July 1949 that detailed service responsibilities and the funding of the new Military Sea Transportation Service (MSTS).[2]

MSTS became the single managing agency for the Department of Defense's ocean transportation needs. The command assumed responsibility for providing sealift and ocean transportation for all military services as well as for other government agencies. The new command set up subcomponents, for example, Military Sea Transportation Service Pacific (ComMSTSPac).

Nine months after its creation, MSTS responded to the challenge of the Korean War. On 6 July 1950, eleven days after the initial invasion of South Korea by North Korean troops, MSTS deployed the 24th Infantry Division for duty in Japan to Pusan, South Korea. In addition to transporting troops and combat equipment to and from Korea, command ships supplied US bases and Distant Early Warning line construction sites and supported US nation building efforts from Europe and Africa, to the Far East.

The 1960s brought the conflict in Southeast Asia. From 1965 to 1969 MSTS moved almost 54 million tons of combat equipment and supplies and almost 8 million long tons of fuel to Vietnam. The Vietnam War era also marked the last use of MSC troop ships for personnel movement. Currently, most US troops are prepositioned by air.

MSTS was renamed Military Sealift Command (MSC) in 1970. Through the 1970s and 1980s MSC provided the Department of Defense with ocean transportation as part of US deterrent efforts during the Cold War years. During the first Persian Gulf War, consisting of Operation Desert Shield and Operation Desert Storm, MSC distinguished itself as the largest source of defense transportation of any nation involved. Command resources delivered more than 12 million tons (11 million metric tonnes) of wheeled and tracked vehicles, helicopters, ammunition, dry cargo, fuel and other supplies and equipment during the war. At the high point of the war, more than 230 government-owned and chartered ships delivering the largest part of the international arsenal that defeated Saddam Hussein in Iraq. MSC was also involved in the second Persian Gulf War, Operation Iraqi Freedom, delivering 61,000,000 square feet (5.7 km2) of cargo and 1,100,000,000 US gallons (4,200,000 m3) of fuel by the end of the first year. 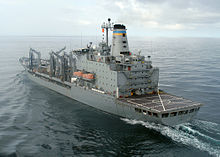 The Naval Fleet Auxiliary Force is the part of the MSC most associated with directly supporting the Navy. In 1972, a study concluded that it would be cheaper for civilians to man USN support vessels such as tankers and stores ships. The NFAF is the American equivalent of the British Royal Fleet Auxiliary. These MSC ships are painted haze gray (except for the hospital ships USNS Mercy (T-AH-19) and USNS Comfort (T-AH-20) which are painted white) and can be easily identified by the blue and gold horizontal bands around the top of their central smokestack.

The mission of the Sealift Program is to provide ocean transportation to the Department of Defense by meeting its sealift requirements in peace, contingency, and war with quality, efficient cost effective assets and centralized management. This is achieved through the use of commercial charter vessels, large medium-speed roll-on/roll-off ships, fast sealift ships, and the Maritime Administration's Ready Reserve Force. Sealift is divided into three separate project offices: Tanker Project Office, Dry Cargo Project Office and the Surge Project Office.

MSFSC is also responsible for providing support to other MSC assets as directed. MSFSC has ship support units, or SSUs, in Naples, Bahrain, Singapore, Guam, Yokohama and San Diego. The SSUs (except for Guam and Yokohama) are collocated with their respective numbered fleet operational logistics task force commanders and Sealift Logistics Commands, but are not within that chain of command. SSUs provide local TYCOM support to ships in their area of operations and report directly to MSFSC.

MSFSC was formed from the following MSC elements:

Stand up of the Ship Support Units (SSU) followed establishment of MSFSC, their parent command. SSU San Diego stood up in conjunction with MSFSC. By late 2008, all subordinate SSUs were fully operational.

MSFSC headquarters is located in a three building campus (SP64, SP47, and SP48) at Breezy Point, Naval Operational Base, Norfolk. Numerous functions are sited at various locations around NOB, Norfolk. Some functions continue in their current locations at Camp Pendleton in Virginia Beach, VA and Point Loma in San Diego, Ca.