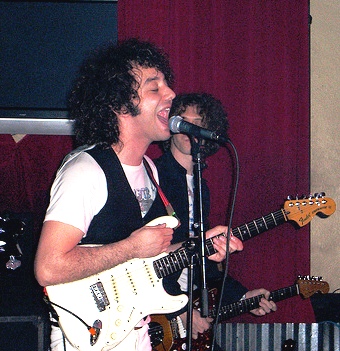 Albert Hammond, Jr. (born April 9, 1980, Los Angeles, ) is a and member of the band, for which he mostly plays , but occasionally plays lead as well (eg. in ""). He is also a solo musician in his own right, and released his debut album "" in 2006 and followed up with "" in 2008. , , , , Television and are often cited as his major influences. [ [http://www.rollingstone.com/artists/alberthammondjr Albert Hammond Jr. : Rolling Stone ] ] [ [http://www.popmatters.com/pm/music/concerts/42784/albert-hammond-jr/ Albert Hammond, Jr. - PopMatters Concert Review ] ]

The son of Gibraltarian musician and former model and beauty pageant winner Claudia Fernandez, his mother has Peruvian and Austrian roots. Albert Jr. was sent to the elite boarding school in at the age of 13. While there, he met , who would go on to be a fellow band member.

In 1998, Hammond met up with Julian Casablancas in and together they formed The Strokes with Casablancas' former schoolmates , , and .

Hammond is currently dating super model . His trademark is wearing formal three-piece suits, and has been said to be the most influential on the band's style. Albert is usually seen playing a 1970's Olympic White Fender or Les Paul Jr. that is sometimes used by bandmate . On the majority of The Strokes' songs he plays rhythm guitar, and solos are played by Valensi. The songs in which Hammond does play solos are "," "," "," "," "," "," and "." His solos tend to focus largely on more emotional, "bluesy"-type melodical work, and the guitar tends to have a cleaner, softer tone in comparison to Valensi's (with a notable exception found in "Vision of Division"). He often holds his guitar in a high horizontal position, similar to , which he says is so that he can dance better.

Hammond's song "Hard To Live (In The City)" appeared in an episode of teen drama, .

Although vocalist is the major contributor to the songwriting process for ' music, Hammond has been known to write a few pieces of his own. He co-wrote the track "Automatic Stop" with Casablancas for the group's second album, "". He has also been credited with writing three mostly instrumental songs ("Swiss Beats", "Holland", and "By The Way") for the band's 2001 tour video entitled "In Transit". These songs were then slightly reworked to appear on his later solo album, under different titles ("Everyone Gets A Star", "Bright Young Thing", and "In Transit", respectively). He had also written a song called "Elephant Song," which Hammond used when he was required to record a song for his Sound 101 class in freshman year, using the school's recording equipment. The song was played at a few shows before the release of their first album. The Strokes later re-recorded the song as a special giveaway for fanclub members.

Hammond released a solo album entitled "" in the U.K. through on October 9, 2006 and in through / on March 6, 2007. Produced by Thin Lizard Dawn vocalist Lattimer and recorded at the in , the album features several musical guests, such as , , The Strokes' manager , of , Chris Feinstein, Mikki James, Sammy James Jr. (The Moony Suzuki) and The Strokes' lead singer, Casablancas. Bassist Josh Lattanzi and drummer Matt Romano serve as the backing band, with Hammond on guitar and vocals. The first single taken from the album, "101", was released exclusively through on 4 September 2006. The music video to "In Transit" was directed by .

He has said to have been "waiting to make a record like this for years". [ [http://albert.shesfixingherhair.co.uk/gallery/magazines/albertmagazines_05.jpgThe Evening Standard (London) - "Albert is so neat"] ] Early support from his fellow bandmates in the Strokes was only evident after Casablancas' role playing bass and back-up vocals on the track "Scared", though all of the members (with the exclusion of who was busy taking care of his new-born children) attended his shows in and around New York.

In November 2006, Hammond announced to be joining Incubus on tour during their North American tour for their new album "".

The "Yours To Keep" album was released in North America on 6 March 2007; he also supported on their world tour before making stops at 's Metropolis and 's Kool Haus. After this, Hammond headlined two North American tours along with a Europe tour. The North American tour featured his friends, . Hammond has one last tour to finish up in Europe and then he is officially done touring for "Yours to Keep".

Hammond announced that "In Transit" will be his next solo single, featuring a cover of 's "Old Black Dawning" as the b-side. It was recorded live from the .

On 29 August 2007, Hammond announced on that he is going back into the studio to record his second album in October 2007 for five weeks.

On 27 May 2008, Hammond released "GfC," the first single off his new album "¿Cómo Te Llama?," on iTunes in the US. The song has already been played extensively live on his 2007 tour. A non-album song entitled "& So it Goes" was released as a B-side along with the single.

On 29 May 2008, Hammond was Myspace's featured artist and exclusively premiered his new album "¿Cómo Te Llama?" uploading all the tracks of the album on his Official Myspace page.

On 8 July 2008, Hammond played a small show at the Virgin Megastore, Union Square, in New York City to celebrate the release of his new album. A noted absence from Hammond's band was recording bassist Josh Latzanni. of the band Longwave, who toured with Hammond on his first album was also missing. Although Hammond was supposed to play only 2 or 3 songs, he ended up playing almost 10, with a selection that included both new and old tracks.

On 11 July 2008, Hammond began his worldwide tour in support of his sophomore release "¿Cómo Te Llama?" at the landmark and sold-out venue Spaceland in the Silverlake neighborhood of Los Angeles, CA with a capacity of only 260 people. This was his only west coast appearance. Opening bands were and .

On 23 August 2008, Hammond's website officially announced that Hammond would be the support act of the British band Coldplay during their European Tour, which would kick off on September 1st in Strasbourg, France.