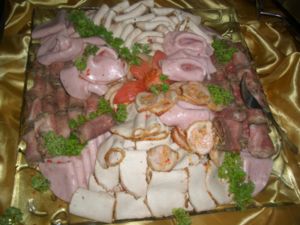 A tray of assorted cold cuts.

Cold cuts are cheeses or precooked or cured meat, often sausages or meat loaves, that are sliced and usually served cold on sandwiches or on party trays. They can be bought pre-sliced in vacuum packs at a supermarket or grocery store, or they can be purchased at a delicatessen or deli counter, where they might be sliced to order. Most pre-sliced cold cuts are higher in fat and sodium than those that are sliced to order, as a larger exposed surface requires stronger preservatives.[1] In any case, the CDC advises that those over 50 reheat cold cuts to "steaming hot" 165 °F and use them within four days.[2]

The Spanish word for cold cut, fiambre, is used in Latin American street slang to refer to a dead body (more common in Chile and Argentina).