The Adventures of Marco Polo

The Adventures of Marco Polo 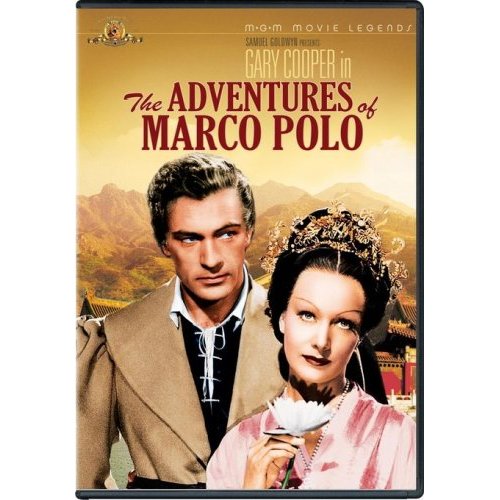 "The Adventures of Marco Polo" is a 1938 drama-adventure genre film, and one of the most elaborate and costly 's productions.

Nicolo Polo shows treasures from China and sends his son () there with his assistant (and comic relief) Binguccio (). They sail from , are shipwrecked, and cross the desert of and the mountains of Tibet to China, to seek out Beijing and the palace of China's ruler, ().

The philosopher/fireworks-maker Chen Tsu () is the first friend they make in the city, and invites them into his home for a meal of spaghetti. Children explode a fire-cracker, and Marco thinks it could be a weapon. Meanwhile, at the Palace, Ahmed (), the Emperor's adviser, harboring dubious ambitions of his own, convinces Emperor Kublai Khan that his army of a million men can conquer .

Kublai Khan promises Princess Kukachin () to the King of Persia. Marco, arriving at the palace, sees Kukachin praying for a handsome husband. Marco is granted an audience with the emperor at the same time as a group of ladies-in-waiting arrive; Kublai Khan lets Marco test the maidens to find out which are the most worthy. Marco tests them all with a question ("How many teeth does a snapping turtle have?"), and he sends off the ones who had incorrectly guessed the answer, as well as those who had told him the correct answer (none), retaining those saying they did not know. His reasoning behind this is that they are the perfect ladies-in-waiting, not overly intelligent, and honest. Kublai agrees and Marco immediately becomes a favored guest. Ahmed shows Marco his private tower with vultures and executes a spy via a trapdoor into a lion pit. Kukachin tells Marco that she is going to marry the King of Persia, but, having fallen in love with her, he shows her what a kiss is. A guard tells Ahmed, who vows to keep Marco out of the way. Ahmed then advises Kublai Khan to send Marco into the desert to spy on suspected rebels. Kukachin warns Marco.

Marco is guided to (), a captain of rebel forces protesting an unfair taxation. Kaidu is in charge of executing spies. Marco and Binguccio are captured. Kaidu's wife Nazama (), jealous of Kaidu's attempted infidelities, becomes attracted to Marco. Kaidu orders Marco to charm his wife so that he can get away with his affairs with other women.

Kublai Khan marches off to war. Bayan () tells Ahmed that he killed Marco. Meanwhile, Nazama is inching closer to Marco, who nervously moves away and examines coal. Ahmed is told that Kublai Khan's army was destroyed. Ahmed takes jewelry from the Persian ambassador and gives it to Kukachin, whom he plans to marry. Then he will seize the throne and rule China. She sends a message to Marco by bird, but Kaidu warns Marco not to escape.

Kublai Khan returns to Beijing, and Ahmed tells him to sign his will, making Ahmed his heir. Kublai Khan refuses until he sees Ahmed threatening Kukachin by offering her to the vultures. Marco urges Ahmed's man Toctai () to kill Kaidu after he has detained him with Binguccio's singing, but Marco saves Kaidu's life, and Toctai is captured. Kaidu tells Marco he resents Kublai Khan's taxes, but it was, in fact, Ahmed who levied the taxes, not Kublai himself. Marco urges Kaidu to attack Ahmed while the army is gone and rushes away from Nazama. Marco goes to Chen Tsu for fire-powder that was ordered by Ahmed. Marco sneaks into the palace as a servant washing the floor and prevents Kukachin from stabbing herself, asking her to stall for time until Beijing can be liberated. Kaidu's forces enter the city as Marco runs out of the palace before the gate closes. Kukachin delays her wedding to Ahmed by making a very long speech, Marco uses the fire-powder to blow open the gate, allowing the army to enter the city and defeat Ahmed's soldiers. Marco comes in and fights Ahmed, pushing him into the lions' den. In the final scene Kublai Khan assures Kaidu the injustice has ended, and Marco offers to take Kukachin to Persia, knowing that the voyage will take a year and that in that year they will be able to be together.

Threads using historical men have been woven into an adventure story, but the romance is film fantasy. Ahmad was governor of Beijing for 22 years and used his power to execute people without trial in order to gain wealth and have his way with women until he was assassinated. Also there were conflicts between Kublai Khan and King Kaidu of .