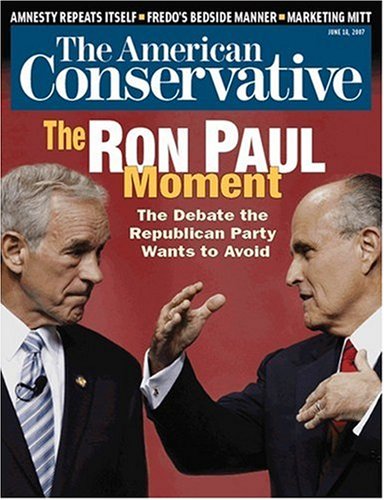 "The American Conservative (TAC)" is a biweekly U.S. opinion magazine founded in by , , and . The magazine is edited by McConnell and published by . "TAC" represents a traditionalist, and paleoconservative voice against the dominance of what it sees as a neoconservative media establishment. It also has ties with and .

The magazine's editorial stance differs from most other "conservative" and "neoconservative" publications in its opposition to 's interventionist as well as his and policies. "TAC" also holds a decidedly more positive view of Europe than, for example, ", , "or" ." Many of its positions resemble another magazine, "Chronicles", which influenced Buchanan; many writers contribute to both magazines.

In the February 11, 2008, issue, the Magazine endorsed for his 2008 presidential bid. [cite web |url=http://www.amconmag.com/2008/2008_02_11/feature.html|title=Paul for President|work=The American Conservative|date=2008-02-11] "TAC" endorsed no single candidate in the 2004 presidential campaign, but instead offered the conservative case for six different choices. These included Buchanan for Bush, McConnell for , for , and Kara Hopkins for not voting, as well as arguments for the Libertarian and Constitution parties.

Buchanan currently holds the title of . Some claim he stepped down as editor of the magazine because of opposition to his endorsing President Bush, leaving Scott McConnell to replace him. While McConnell had been acting as editor in chief of the magazine from the beginning, Buchanan’s fame attracted more readers; hence, the title was originally his.Fact|date=February 2007

In the midterm elections of , "The American Conservative" urged its readers to vote for Democrats saying, "It should surprise few readers that we think a vote that is seen—in America and the world at large—as a decisive “No” vote on the Bush presidency is the best outcome." [cite web|url=http://www.amconmag.com/2006/2006_11_20/feature.html|work=The American Conservative|date=2006-11-20|title=GOP Must Go]

was named publisher in