In the study of ellipses and related geometry, various parameters in the distortion of a circle into an ellipse are identified and employed: Aspect ratio, flattening and eccentricity. All of these parameters are ultimately trigonometric functions of the ellipse's modular angle, or angular eccentricity, the conventional denotation being the Greek letter "alpha",

The angular eccentricity of an ellipse with semi-major axis, or transverse radius,

, and semi-minor axis, or conjugate radius[1],

In the following, the previously defined ellipse with radii

The most tangible characteristic of an ellipse is the diametric quotient of the minor axis to the major axis, the aspect ratio.

, and the third eccentricity,

Since they are mostly used in that form anyway, the eccentricities are usually found and kept in their squared form.

The primary eccentricity could be regarded as the complementary aspect ratio, as it is the ratio of the linear eccentricity to the semi-major axis:

The flattening, or ellipticity, in contrast, is self-explanatory, as it defines the degree of "squashing", from no flattening (a perfect circle) to complete flattening (a straight line).

), it is usually the inverse (primary) flattening that is provided: 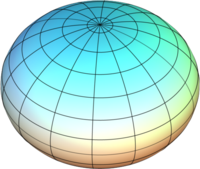 For the most part, elliptic formularies ignore the angular eccentricity for the more familiar and notationally concise

. However, these parameters don't provide the clear and obvious transformational relationships and structure. Consider the basic elliptic integrand at point P:

While one may consider such ability to convert as just gratuitously frivolous, there is at least one valid reason, as the Binomial series expansion (which planetodetic formularies frequently use) for

converges a lot quicker than the one for

which, in turn, converges quicker than

, there are likely other, even more efficient, series expansions possible (if not even efficiently practical approximations to a general transcendental elliptic integral).
Another example is the equation for authalic surface area:

While one certainly can use

to define and express this type of equation, using

frequently provides a more illustrative—if not even its definitively mathematical—origin.