State University of New York at Oswego, also known as SUNY Oswego and Oswego State, is a public university in the City of Oswego and Town of Oswego, New York, on the shore of Lake Ontario. It has three campuses: historic lakeside campus in Oswego, Metro Center in Syracuse, New York, and Phoenix Center in Phoenix, New York.[3][4][5]

SUNY Oswego was founded in 1861 as Oswego Normal School by Edward Austin Sheldon,[6] who introduced a revolutionary teaching methodology Oswego Movement in American education. In 1942 the New York Legislature elevated it from a normal school to a degree-granting teachers' college, Oswego State Teachers College, which was a founding and charter member of the State University of New York system in 1948.[6] In 1962 the college broadened its scope to be a liberal arts college.

SUNY Oswego currently has over 73,000 living alumni.[6] Oswego State offers more than 100 academic programs leading to bachelor's degrees, master's degrees, and certificates of advanced study.[6] It consists of four colleges and schools: College of Liberal Arts and Sciences, School of Business, School of Education, and School of Communications, Media and the Arts. In 2011, SUNY Oswego marks its 150th anniversary with a sesquicentennial celebration campaign to honor its rich tradition and heritage.[7] 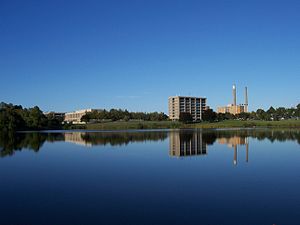 Campus as viewed from Glimmerglass Lagoon

Originally founded in the city of Oswego by Sheldon to train teachers to meet pressing educational needs, the college moved to its current location on the shore of Lake Ontario in 1913 after Sheldon Hall was constructed. The current campus is located on 690 acres (2.8 km2) along Lake Ontario. Development of the campus was planned by the architectural firm of Skidmore, Owings and Merrill, who designed the major buildings.

The campus today consists of 46 buildings with classroom, laboratory, residential and athletic facilities. Recent years have witnessed the launch of a $700 million campus-wide renovation and renewal program, with the new Campus Center acting as the social hub of campus.

The college's new social hub known as the Campus Center Complex, which opened in fall 2007, includes new construction and renovation of the existing Swetman/Poucher complex. The $25.5 million 111,492-square-foot (10,357.9 m2) Campus Center portion, the new construction, includes a convocation hall and ice arena, food court, box office, fireplace lounge, breakfast nook and reservable spaces. The renovated portions of the building house The Compass (student services); The Point (student involvement); a student media center with WNYO, WTOP and The Oswegonian newspaper; Copy Center; and Freshëns Cafe. Academic departments in the Campus Center include English and creative writing, modern languages and literatures and philosophy, while the Office of Learning Services stands ready to assist students who need help outside the classroom. In addition, the College Honors Program is located in the Campus Center.

A variety of living option are available through 11 residence halls:

Due to a shortage in residential rooms in fall 2008 caused by greater enrollment and on-campus living requests than expected, several rooms were offered in renovated conference/hotel space in Sheldon Hall. A new townhouse village with apartment living is under construction south of Glimmerglass Lagoon, with a fall 2010 opening date projected.

Fewer than 100 feet (30 m) from Johnson Hall is Shady Shore. Shady Shore was the home of college founder Dr. Edward Austin Sheldon. It often has served as the residence for the college president throughout the years, including the tenth and current president, Deborah F. Stanley.

SUNY Oswego has experienced numerous accreditations and awards throughout the past two decades, including recognition as being one of the only 28 "Top Up-and-Coming Colleges" by US News in the nation for 2010.[8][9] Colleges of Distinction commended SUNY Oswego for its continual growth and strong academics. The organization cited SUNY Oswego as having “Liberal arts and career directed studies, in a dynamic, interactive and supportive environment.” Also, “The possibilities are endless with an extensive choice of academic options and majors, an outstanding faculty, and challenging courses that encourage the exchange of ideas.

SUNY Oswego's Graduate School of Business has been named by both Princeton Review and US News as one of the best business schools in America, among more than 1,400 colleges nationwide.[10] SUNY Oswego was ranked No.18 on the US News list of the best public campuses in the Northern region in 2011.[11] Its MBA program has been internationally accredited by AACSB.[12] In 2005, SUNY Oswego was ranked No.10 in the nation on a master level institution for sending students abroad for a semester according to Open Doors report by the Institute for International Education.[13]

In addition to SUNY Oswego’s vibrant community and encouraging professors, students are offered one of the largest overseas study programs in the northeast.[14] Continents from around the globe contain universities that directly work with SUNY Oswego to provide students with internship opportunities and valuable learning experiences. 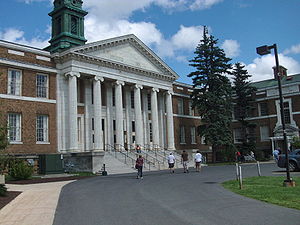 Penfield Library is an academic library that supports the instructional, research and service goals of SUNY Oswego, one of 64 campuses of the State University of New York. The library is named after Lida S. Penfield (1873–1956), once chair of the English department. The current 160,000-square-foot (15,000 m2) facility opened in 1968, replacing a library of the same name in what is now Rich Hall. The library is home to the Millard Fillmore and Marshall Family Papers and numerous Digitized Collections including the Emergency Refugee Shelter at Fort Ontario (Safe Haven) and the Millard Fillmore papers.

Penfield Librarians provide Research help for SUNY Oswego students through "Ask a Librarian" services in a variety of methods, including chat, e-mail, phone, in-person, and through extended appointments with subject librarians.

SUNY Oswego's athletic teams are known as the Lakers, the university offers 23 intercollegiate varsity sports. Oswego is a member of NCAA Division III and teams compete in the State University of New York Athletic Conference for most sports- women's ice hockey plays in the ECAC West, as that sport is not offered by the SUNYAC.

Oswego has around 140 clubs and organizations, many funded by the Student Association. These include the student-run television station WTOP, the student-run The Oswegonian newspaper, the first ever student-run ambulance corps (SAVAC), a collegiate-level synchronized skating team, the student-run radio station WNYO-FM, Nationally Competitive Cheerleading, community service clubs, political organizations, the Shaun Cassidy Fan Club Improv Comedy Troupe, Club Baseball, Oswego Women's Rugby, as well as groups that appeal to those with specific interests or hobbies such as the Financial Management Association, the Investment Club, the Christian groups BASIC (Brothers and Sisters in Christ) and CCM (Christian Campus Ministries), the SUNY Oswego Secular Student Alliance, a Muslim Student Association, the Pride Alliance (SUNY Oswego's only LGBT Organization), the theater group Blackfriars, the gamer club Storytellers' Guild (STG), the Pro-Wrestling Club (PWC), College Republicans, and the local chapter of the American Society for Information Science and Technology.

Oswego also has an array of Greek organizations (fraternities, sororities, or mixed) from both national and locally recognized chapters. Each semester, eligible students can "rush" a Greek organization of their choice.

The university's anthem is typically sang during the torchlight ceremonies and commencements. Its lyrics are as the following:[18]

Voices fill the air singing reverently, Pledging our school fair truth and loyalty, This our song we raise in her name and praise, Oswego Alma Mater Hail to Thee!

Ever in our heart you will cherished be, All that you impart makes us bound to thee, And our college days we'll recall always, Oswego Alma Mater gloriously!

Wisdom pure and bright, light our way to see, All the good and right where e're we may be, So that all we do will pay tribute to, Oswego Alma Mater endlessly!

Many Upstate New York TV meteorologists are graduates or attendees of SUNY Oswego.