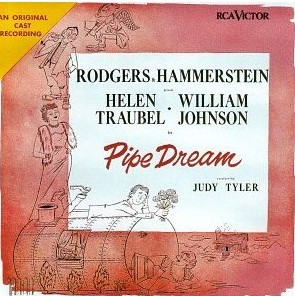 "Pipe Dream" is a musical with music by and lyrics and book by . Its conception is tied up with unrealized plans by other collaborators to make a stage musical based upon 's best-selling novel "Cannery Row". Steinbeck, who was writing the libretto for that work, discontinued, and instead began creating the story of a sequel novel, "". Rodgers and Hammerstein acquired rights to make a musical out of this story, under the title "Pipe Dream", which is a pun on one of the aspects of the stage decor -- an old boiler-pipe that becomes the abode of the lead female character.

"Pipe Dream" premiered on Broadway on , at the Shubert Theater. The director was and the choreographer was Boris Runanin. Among the leads were William Johnson as Doc, as Suzy, and operatic soprano as Fauna. The show marked also the Broadway debut of film actor .

The original production closed on June 30, 1956, after a ran of eight months and 245 performances, thus having the shortest run of any Rodgers and Hammerstein show, and the nearest thing to a "flop" they ever wrote together. However, it was nominated for nine s, winning for Best Costume Design (), and the musical is still occasionally produced, as with [http://www.42ndstmoon.com/Schedule/pipedream2002.html 42nd Street Moon's presentation in 2002] .

In his autobiography, intimated that if anything had doomed "Pipe Dream", it was the casting of Traubel. Rodgers himself took blame for miscasting her in the role of Fauna. Another factor that may have been decisive was that Rodgers himself was absent due to cancer surgery during much of the rehearsal/tryout period before the Broadway opening. Other reasons given for the musical's failure include the artistic incompatibility between the morally conservative Hammerstein and the cheerful of Steinbeck's characters.

According to the sleevenotes on the CD re-release of the original cast recording, auditioned for "Pipe Dream", but was told by Richard Rodgers that she should pursue the other show she was being courted for at the time, i.e., "". (Andrews did, and the role of Eliza Doolittle subsequently made her a star.)

In 1989, a few months before the death of , it was announced that a film version of "Pipe Dream" was being considered as a vehicle for the . This wildly implausible decision (ultimately abandoned) was clearly prompted by the only Muppet-worthy detail of the show's original libretto: the fact that the main character lives inside a pipe.

"Pipe Dream" is a story about friendship and romance among people living around in shortly after . The main characters are Fauna (owner of the Bear Flag Cafe); Doc, a marine biologist and Suzy, a runaway. With the help of the Mac and the boys (who live in the Palace Flophouse) and the other girls of the brothel, Suzy and Doc are brought together at the end by Fauna.

Hammerstein in his toned down the directness of Steinbeck's portrayal of the sexually "low" aspects of the story (and, of course, the language), but the import is still there. For instance, the first scene makes clear that females stay overnight at Doc's; the Bear Flag Cafe is still a brothel -- albeit not one presented explicitly.

;Act I
* All Kinds of People - Doc and Hazel
* The Tide Pool "To Suzy" - Doc, Hazel and Mac
* Everybody's Got a Home But Me - Suzy
* All Kinds of People (Reprise) - Jim Blaikey
* A Lopsided Bus - Mac, Hazel, Kitty, Sonya and the Flophouse Gang
* Bums' Opera - Fauna, Joe, Pancho and the Flophouse Gang
* The Man I Used To Be - Doc and danced by Slim
* Sweet Thursday - Fauna
* Suzy Is a Good Thing - Fauna and Suzy
* All At Once You Love Her - Doc, Suzy and Esteban ;Act II
* The Happiest House on the Block - Fauna and Girls
* The Party That We're Gonna Have Tomorrow Night - Mac and the people of Cannery Row
* I am a Witch - Fauna, Agnes, Marjorie, Beulah and Mable
* Will You Marry Me? - Suzy, Fauna and Doc
* Thinkin - Hazel
* All At Once You Love Her (Reprise) - Fauna
* How Long? - Fauna, Doc, Flophouse Boys and Bear Flag Girls
* The Next Time It Happens - Suzy and Doc
* Sweet Thursday (Reprise) - Entire Company
* Finale - Entire Company