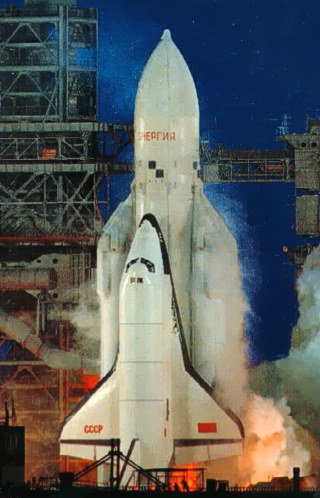 The Buran spacecraft ( _ru. "Буран, "Snowstorm" or "Blizzard"), "11F35 K1", was the only fully completed and operational space shuttle vehicle from the Soviet . With a design that borrowed heavily from the American , the Buran completed one unmanned spaceflight in 1988 before cancellation of the Soviet shuttle program in 1993. The Buran was subsequently destroyed by a hangar collapse in 2002.

Like its American counterpart, the "Buran", when in transit from its landing sites back to the launch complex, was transported on the back of a large jet aeroplane. It was piggy-backed on the Mriya aircraft, which was designed for this task and remains the largest aircraft in the world.

Several shuttles were produced, one of those, the was modified to fly with jet engines for aerodynamic testing. One painted mock shuttle (the former static test-article ) is now a ride simulating space flight in Gorky Park, . The OK-GLI was sold by its owner NPO Energia, shipped to Sydney in Australia and subsequently displayed at the Sydney Olympics in 2000. Shortly after, the new owner went bankrupt and the OK-GLI shuttle then went to for a number of years while legal ownership status was in dispute. The Sydney/Bahrain (OK-GLI) shuttle was acquired by the German in 2004, [http://www.technik-museum.de/buran/] and has been transported to the museum, where it is exhibited to the general public.

The first and only orbital launch of the (unmanned) shuttle "Buran" 1.01 occurred at 3:00 UTC on . It was lifted into orbit by the specially designed booster rocket. The life support system was partially installed and no software was installed to run the computer display screens.

The shuttle orbited the Earth twice in 206 minutes of flight.

Part of the launch was televised, but the actual lift-off was not shown. This led to some speculation that the mission may have been fabricated, and that the subsequent landing may not have been from orbit but from a shuttle-carrying aircraft, as with the Space Shuttle "Enterprise". Since then, the launch video has been released to the public, confirming that the shuttle did indeed lift off, with the poor weather conditions described by the Soviet media at the time easily seen.

On , , a housing a "Buran" 1.01 orbiter (the actual "Buran" that flew in 1988) collapsed due to poor maintenance. The collapse killed eight workers and destroyed the orbiter as well as a of an Energia booster rocket. [ cite news | publisher= | title=Russia's space dreams abandoned | url=http://news.bbc.co.uk/1/hi/sci/tech/1985631.stm | work= | accessdate=2007-11-14 | date= | last=Whitehouse | first=David ] ;Photos
* [http://www.buran.ru/images/jpg/bbur89.jpgPhoto of collapsed hangar]
* [http://www.buran.ru/images/jpg/bbur90.jpgRemains of Buran photo] . The Buran's right front windshield is still visible under the debris.