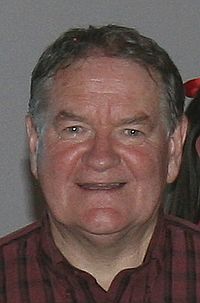 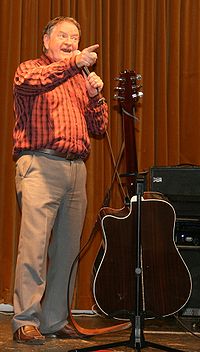 Dafydd Iwan Jones was born in Brynaman in Carmarthenshire, Wales, and is the elder brother of politician Alun Ffred Jones.[1] He spent most of his youth in Bala in Gwynedd before attending the University of Wales, Cardiff where he studied architecture. He rose to fame as a singer-songwriter, writing and playing folk music in the Welsh language.[2]

Dafydd Iwan's earliest material was Welsh translations of tunes by American folk / protest singers: Woody Guthrie, Pete Seeger, and Bob Dylan. Soon enough, Dafydd Iwan commanded the initiative to write his first ballads. The most prominent of these were political. His most famous satirical song, "Carlo" ("Charlie"), was written on the occasion of the investiture of the Prince of Wales in 1969.

It should be noted, however, that Dafydd Iwan was equally at home writing love ballads and variations on traditional Welsh folk tunes.

By the late 1960s he was receiving television coverage both for his music and for his political activities, including being imprisoned in 1970 as part of the fight for Welsh language rights, an event commemorated in his song Pam fod eira'n wyn? ("Why is snow white?")

During the 1970s, Dafydd Iwan's political interests (and songs) took in such themes as Pinochet's Chile; Welsh Devolution; the Vietnam War and the Northern Ireland troubles. His inherent internationalism continued in following decades, as his songs mention events such as the Tiananmen Square massacre (1989), the Gulf War (1990) and opencast mining in the south Wales valleys (1995). His biggest hit to date, "Yma O Hyd" ("Still Here"), released in 1981, has become a favourite of most Welsh folk music fans

Around the turn of the millennium, Dafydd Iwan signalled an end to regular performances, although he remains an occasional performer on an ad hoc basis. It was fitting by many fans that the end of his career should coincide roughly with the establishment of an elected National Assembly for Wales and the beginning of a new generation in Welsh politics.

Dafydd Iwan was one of the founders of Recordiau Sain Cyf (Sain Records Ltd), one of the main Welsh music labels, a business he still manages today.

Formerly a Plaid Cymru councillor in Gwynedd he lost his seat in the May 2008 local elections. He blamed his defeat on a dirty tricks campaign by his opponents.

Iwan's long service to the Welsh language led to his being made an honorary member of the Gorsedd of Bards at the National Eisteddfod at Bangor in 1971.

Iwan escaped a driving ban (for speeding offences) in October 2003 on the basis that he needed to drive for his musical and political duties. This incident led the satirical Private Eye magazine to question "Is Plaid Cymru a political party or a racing team?"

Iwan became President of Plaid Cymru in 2003.[3] He is regarded as a unifying force within the party in the context of several damaging internal splits in recent years.

As part of his campaign seeking re-election as President of Plaid Cymru, Iwan launched a campaign blog 'Dafydd 4 President' in July 2008.

On 22nd October 2011, Dafydd and his wife Bethan came to watch the Welsh derby, Wrexham FC vs Newport County AFC. Dafydd sang his hit song ' Yma O Hyd ' infront of a crowd of 4,000 before the teams came out. He was invited to sing by the new Wrexham FC Supporters Group named ' Yma O Hyd ' named after his great song.