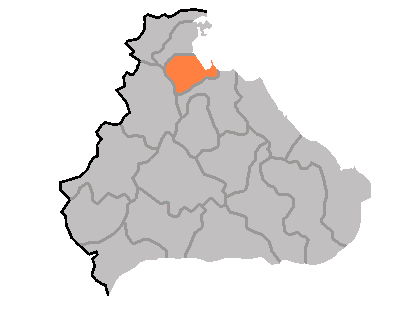 Wŏnsan is a port city and naval base in southeastern . It is the capital of Kangwŏn Province. The population of the city is estimated to have been 331,000 in 2000. Famous people from Wŏnsan include , diplomat and Secretary of the Workers' Party.

Wŏnsan used to be in , but when provincial borders were redrawn in 1946, it joined the northern half of Kangwŏn (which had been split at the into a zone under Soviet control in the north and one of American control in the south in 1945) and became its capital, as Kangwŏn's traditional capitals (1395–1895) and (since 1896) both were south of the 38th parallel and south of the Military Demarcation Line that replaced the 38th parallel as a border in 1953. Chuncheon is still the capital of the southern part of the province () which is controlled by South Korea.

Today, Wŏnsan is a comprehensive harbor industrial city, it is also the administrative centre of Kangwŏn Province.

Wŏnsan's area is convert|269|km2|sqmi. It is located in Kangwŏn Province, on the westernmost part of the (East Sea of Korea) and the east end of the Korean peninsula's neck. Mt. Changdok (Changdok-san) and Mt. Naphal (Naphal-san) are located to the west of the city. More than 20 small islands flank Wŏnsan's immediate coastal area, including Hwangt'o Island and Ryo Island. Wŏnsan is considered an excellent natural port location.

Wŏnsan is connected to Pyongyang and other North Korean cities by electric railway and a modern highway system. The city has a military and civilian dual purposes air station (WON) and is equipped with 01/19 and 15/33 dual runways, and is also the terminus of the , the only direct connection between and North Korea.

The Korean Central Broadcasting Station maintains a 250-kilowatt transmitter broadcasting on 882 kHz AM.

Most of North Korea is not accessible to foreign tourists. However, nearby Songdowon is a famous sea bathing destination for North Koreans, as the water there is exceptionally clear. Pine trees are abundant in the surrounding area, and it has been designated a national sightseeing point.

Songdowon International Children's Union Camp was built beside Songdowon, at coord|39|11|14|N|127|24|28|E, and it still receives teenagers and youth for cultural exchange between North Korea and various foreign countries.