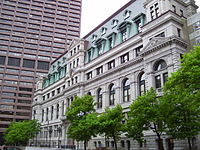 The Massachusetts Supreme Judicial Court (SJC) is the highest court in the Commonwealth of Massachusetts. The SJC has the distinction of being the oldest continuously functioning appellate court in the Western Hemisphere.

The court was established in 1692 as the "Superior Court of Judicature". It was formed by order of the British Crown in response to the large number of prosecutions stemming from the Salem Witch Trials. Its name was changed to the Supreme Judicial Court after the adoption of the Massachusetts Constitution in 1780. In 1804 an official case reporter was created to publish the court's decisions, and the first officially reported decision was Gold v. Eddy (1804).

The seven Justices hear appeals on a broad range of criminal and civil cases between September and May.

Single Justice sessions are held each week throughout the year for certain motions pertaining to cases on trial or on appeal, bail reviews, bar discipline proceedings, petitions for admission to the bar, and a variety of other statutory proceedings. The Associate Justices sit as Single Justices each month on a rotation schedule.

In addition to its appellate functions, the SJC is responsible for the general superintendence of the judiciary and of the bar, the creation or approval of rules for the operations of all the state courts, and, in certain instances, providing advisory opinions, upon request, to the Governor and General Court on various legal issues.

The SJC also has oversight responsibility in varying degrees, according to statutes, with several affiliated agencies of the judicial branch, including the Board of Bar Overseers, the Office of Bar Counsel, the Board of Bar Examiners, the Clients' Security Board, the Commission on Judicial Conduct, the Massachusetts Legal Assistance Corporation, the Massachusetts Mental Health Legal Advisors’ Committee, and Correctional Legal Services, Inc.

The SJC is sits at the John Adams Courthouse, 1 Pemberton Square, Boston, Massachusetts 02108, which also houses the Massachusetts Appeals Court and the Social Law Library.

The Court consists of a Chief Justice and six Associate Justices appointed by the Governor of Massachusetts with the consent of the Governor's Council. The Justices hold office until the mandatory retirement age of seventy, like all other Massachusetts judges.

The currently serving justices are:

The proper legal citation for the Massachusetts Supreme Judicial Court is "Mass."