A Trip to the Moon

A Trip to the Moon

Infobox Film
name = A Trip to the Moon 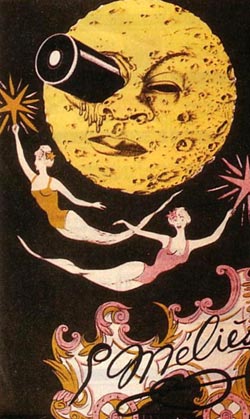 The film was written and directed by , assisted by his brother Gaston. The film runs 14 minutes if projected at 16 , which was the standard at the time the film was produced. It was extremely popular at the time of its release and is the best-known of the hundreds of fantasy films made by Méliès. "A Trip to the Moon" is the first film, and utilizes innovative and , including the iconic shot of the rocketship landing in the moon's eye.

At a meeting of astronomers, their president proposes a trip to the . After addressing some dissent, six brave astronomers agree to the plan. They build a space capsule in the shape of a bullet, and a huge cannon to shoot it into space. The astronomers embark and their capsule is fired from the cannon with the help of a bevy of beautiful women in sailors' outfits. The watches the capsule as it approaches, and it hits him in the eye.

Landing safely on the Moon, the astronomers get out of the capsule and watch the rise in the distance. Exhausted by their journey, the astronomers unroll their blankets and sleep. As they sleep, a passes, the appears with human faces peering out of each star, old leans out of a window in his ringed planet, and Phoebe, goddess of the Moon, appears seated in a crescent-moon swing. Phoebe calls down a snowfall that wakens the astronomers. They seek shelter in a cavern and discover giant mushrooms. One astronomer opens his umbrella; it promptly takes root and turns into a giant mushroom itself.

At this point, a Selenite (an oid alien inhabitant of the Moon, named after ) appears, but it is easily killed by an astronomer, as the creatures explode if they are hit with a hard force. More Selenites appear and it becomes increasingly difficult for the astronomers to destroy them as they are surrounded. The Selenites arrest the astronomers and bring them to their leader. An astronomer picks the Chief Selenite up off its throne and dashes him to the ground, exploding him.

The astronomers run back to their capsule (continuing to hit the pursuing Selenites on the way). Five get inside. The sixth uses a rope to tip the capsule over a ledge on the Moon and into space. A Selenite tries to seize the capsule at the last minute. Astronomer, capsule, and Selenite fall through space and land in an ocean on Earth. The Selenite falls off and the capsule floats back to the surface, where they are rescued by a ship and towed ashore.

When originally screened, the film featured a final scene depicting a celebratory parade in honor of the travelers' return. Until recently, this scene was considered lost, and did not appear on any commercially available editions. However, a complete cut of the film was discovered in a French barn in 2002. Not only is it the most complete cut of the movie, but it is also entirely hand-colored. It was restored and premiered in 2003 at the Pordenone Silent Film Festival.

Some historians suggest that although "A Trip to the Moon" was among the most technically innovative films up until that time, it still displays a primitive understanding of narrative film technique. American film scholar Ken Dancyger writes that the film is "no more than a series of amusing shots, each a scene unto itself. The shots tell a story, but not in the manner to which we are accustomed. It was not until the work of American that editing became more purposeful."

Although most of the editing in "A Trip to the Moon" is purely functional, there is one unusual choice: when the astronomers land onto the lunar surface, the "same event is shown twice, and very differently"

Some have claimed that the film was one of the earliest examples of film, while stating that the film aims to "show the illogicality of logical thinking." Others still have remarked that the director, Georges Méliès, aimed in the film to "invert the hierarchal values of modern French society and hold them up to ridicule in a riot of the carnivalesque." This is seen as an inherent part of the film's plot; the story itself pokes fun at the scientists and at science in general: upon traveling to the moon, these astronomers find that the face of the moon is, in fact, the face of a man, and that it is populated by little green men.

Méliès had intended to release the film in the United States to profit from it; however, 's film technicians secretly made copies of it and distributed it throughout the country. Méliès never profited from it and eventually went broke.