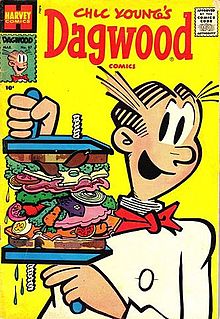 A Dagwood sandwich is a tall, multi-layered sandwich made with a variety of meats, cheeses and condiments. It was named after Dagwood Bumstead, a central character in the comic strip Blondie, who is frequently illustrated making enormous sandwiches. According to Blondie scripter Dean Young, his father, Chic Young, began drawing the huge sandwiches in the comic strip during 1936.[1]

Though the exact contents of Chic Young's illustrated Dagwood sandwich remain obscure, it obviously contains large quantities and varieties of cold cuts, sliced cheese and vegetables separated by additional slices of bread. An olive pierced by a toothpick or wooden skewer usually crowns the edible superstructure. "Dagwood sandwich" has been included in Webster's New World Dictionary, and "Dagwood" (referring to the sandwich) has been included in the American Heritage Dictionary.[2]

Assorted lunch meats featuring Dagwood have been sold at grocery stores. In May 1999, a counter-service restaurant named Blondie's opened at Universal Orlando's Islands of Adventure, serving a traditional Dagwood-style sandwich. Blondie's bills itself as "Home of the Dagwood Sandwich." The exterior displays a 20-foot plastic Dagwood sandwich over the entrance.[3] 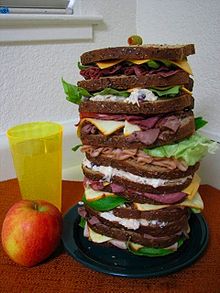