The Death and Return of Superman

The Death and Return of Superman

The Death and Return of Superman is a beat 'em up video game based on the Death of Superman storyline. It features many characters from the comics, including Superman himself, Superboy, Steel, Cyborg, the Eradicator, and Doomsday. All of the five Supermen are playable characters at some point. 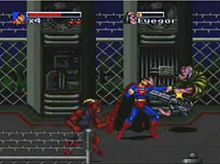 Gameplay is the standard beat 'em up type

Each Superman has the ability to fly and can thereby avoid certain characters or obstacles using this ability. There are also characters that have the ability to fly and are thereby easier to defeat if confronted in the air. There are also certain areas and levels where flying is mandatory. Also, many obstacles can be passed only by flying. However, certain screens in which the character is on an elevated platform the flying ability is almost completely negated.

With the exceptions of Superman and to a point the Man of Steel, each character has two standard types of level: melee combat and flying in which only projectile moves can be used. The standard melee levels consist of the character fighting through “common” enemies and ending the level with a fight with a “boss” character. When playing the flying levels, the player can move the character anywhere in the screen while firing the character’s projectile move at greatly weakened enemies. No boss characters appear in these levels. Strangely, Superman never has a flying level and instead plays through three standard melee levels. Steel has a unique flying level that plays more like a combat level as he doesn’t use his projectile attacks and relies on his melee attack. Also, Steel has a “boss” character he must defeat in order for the game to progress.

Choice of characters isn’t allowed during the game and the player must play through the game as a pre-determined character for each level.

(Each description is quoted from the game) 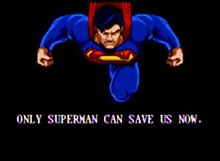 Image of Superman during a plot interval

The game follows the events of the Death of Superman starting from the time that the Underworlders (led by Clawster) take over the Metropolis Power Plant to Superman's return and defeat of the Cyborg. Other heroes such as Green Lantern ,and the Justice League are omitted from the game (though the league is mentioned in a cutscene) and other notable enemies such as Mongul are also missing from the plot. While an image of an unpowered Superman is present in the game, the player never gets to battle with Superman in this form.

Events that take place in the game are: the Underworlder's attack on the power plant, Doomsday's appearance and defeat/victory against Superman (Doomsday is twice fought against as a boss character), the Cyborg's assault on Cadmus to retrieve the body of Doomsday, the battle between the Eradicator and Steel, the destruction of Coast City and the subsequent fight between the Eradicator and the Cyborg, Superboy's fight against the Cyborg, Steel's assault on Engine City, Superboy's assault on the missile bound for Metropolis, Steel's destruction of Engine City, and Superman's final battle with the Cyborg.