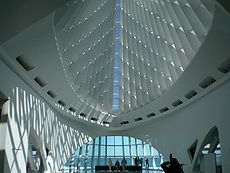 Interior of the Milwaukee Art Museum

The Milwaukee Art Museum from the north at night

The Milwaukee Art Museum (MAM) is located on Lake Michigan in Milwaukee, Wisconsin.

Beginning around 1872, multiple organizations were founded in order to bring an art gallery to Milwaukee, as the city was still a growing port town with little or no facilities to hold major art exhibitions. Over the span of at least nine years, all attempts to build a major art gallery had failed. In 1881, exhibitions were held at Milwaukee's Exposition Hall, which was Milwaukee's primary event venue at the time. Shortly after that year, Alexander Mitchell donated all of her collection into constructing Milwaukee's first permanent art gallery in the city's history.

The art gallery, the Quadracci Pavilion, was designed by the Spanish architect Santiago Calatrava. The Reiman Bridge, also designed by Calatrava, connects to the pavilion and provides pedestrian access to and from downtown. With the exception of the temporary exhibition gallery, the galleries are contained in both the Saarinen building and a 1975 addition designed by local architect David Kahler. This addition was commissioned in 1969 to make room for other exhibits and donations.

The museum is home to over 25,000 works of art. Its permanent holdings contain an important collection of Old Masters and 19th-century and 20th-century artwork, as well as some of the nation's best collections of German Expressionism, folk and Haitian art, American decorative arts, and post-1960 American art. The museum holds a large number of works by Georgia O'Keeffe, as well as many works by the German Expressionist, Gabriele Münter.

The MAM recently gained international recognition with the construction of the white concrete Quadracci Pavilion, designed by Santiago Calatrava (his first completed project in the United States), which opened on May 4, 2001. The pavilion was engineered by the Milwaukee-based engineering firm, Graef, while the construction manager was also Milwaukee-based, C.G. Schmidt. The structure contains a movable, wing-like brise soleil which opens up for a wingspan of 217 feet during the day, folding over the tall, arched structure at night or during inclement weather. The brise soleil has since become a symbol for the city of Milwaukee. In addition to a gallery devoted to temporary exhibits, the pavilion houses the museum's store and its restaurant, Cafe Calatrava. The pavilion received the 2004 Outstanding Structure Award from the International Association for Bridge and Structural Engineering.

The museum held auditions for the 10th season of American Idol in 2010.
The Quadracci Pavilion was prominently featured in the 2011 blockbuster, Transformers: Dark of the Moon.