The first IChO was held in Prague, Czechoslovakia, in 1968. The event has been held every year since then, with the exception of 1971. The delegations that attended the first events were mostly countries of the former Eastern bloc and it was not until 1980, the 12th annual International Chemistry Olympiad, that the event was held outside of the bloc in Austria.

Structure and rules of the competition 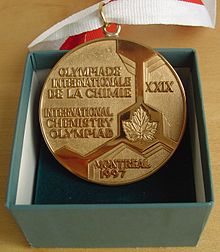 Each delegation consists of up to four students and two mentors (one of them is designated as the head of the delegation or "head mentor"). A delegation may also include a handful of guests and scientific observers. Students must be under the age of 20 and must not be enrolled as regular students in any post-secondary education institution. The International Information Center of the International Chemistry Olympiad is based in Bratislava, Slovakia.

Countries who wish to participate in the IChO must send observers to two consecutive olympiads before their students can participate in the event. A total of 68 countries took part in the 38th IChO: 67 as participants and 1 as an observer.

Students receive the examinations translated into their languages of preference. It is the duty of the mentors to translate the examinations from English before they are given to the participants. After the examinations are held and evaluated by a committee appointed by the host country and before awards are presented, mentors discuss the evaluation of the exams with judges of the committee to assure fairness in their evaluation. Because the mentors review the examinations before they are given to participants, any communication between the mentors and the students is strictly forbidden prior to the completion of both exams, and the students are required to surrender any mobile phones and laptop computers to the organizer.

The syllabus of the competition contains subjects from several areas of chemistry, including organic chemistry, inorganic chemistry, physical chemistry, analytical chemistry, biochemistry, and spectroscopy. Though the majority of these subjects are included in most secondary school chemistry programs, for the most part, they are evaluated at a much deeper level and many may require a level of knowledge and understanding comparable to that of post-secondary education. In addition, the host country of each IChO issues a set of preparatory problems well in advance of the competition every year. These preparatory problems cover specific topics in considerable more depth than typical post-secondary education. Preparation for the International Chemistry Olympiad demands a high level of understanding and interest in chemistry and an outstanding ability to relate chemical subjects with one another as well as with the practical world. 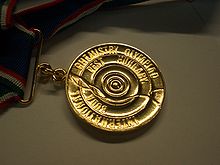 A gold medal from the 40th IChO

These events are also outstanding opportunities for the students to meet people from all around the world who share similar interests, to visit different places, and to get in touch with different cultures. As the aims of the competition establish, the IChO competitions help to enhance friendly relations among young people from different countries; they encourage cooperation and international understanding.

Preparation for the competition

While each country is free to choose its team by whatever means it deems appropriate, the selection process usually involves holding regional and national olympiad competitions. Many countries hold "training camps" for its top students, where mentors from the country give the students accelerated college-level courses in chemistry with an emphasis on the topics covered in that year's preparatory problems as well as practical training. It is agreed that such training programs must not exceed a total duration of two weeks but there are allegations every year that some countries exceed this limit by months or even years. Another concern is that some countries tend to bring the same students to the competition year after year, which helps them win better medals. Although some believe that this is against the spirit of the olympiad, many nations find it hard to justify leaving their best students at home.

The idea of the International Chemistry Olympiad was developed in the former Czechoslovakia in 1968. It was designed with the aim to increase the number of international contacts and the exchange of information between nations. Invitations were sent by the Czech national committee to all socialist countries, except Romania. However, in May 1968, relations between Czechoslovakia and the Soviet Union became so delicate that only Poland and Hungary participated in the first international competition.

The first International Chemistry Olympiad took place in Prague between 18 and 21 June, 1968. Each of the three participating countries sent a team of six pupils, and four theoretical tasks were to be solved. Guidelines for the next competitions were already suggested. The second chemistry Olympiad took place in 1969 in Poland, and Bulgaria also participated. Each team consisted of five pupils, and an experimental competition was added. The decision was made to invite more socialist countries to future competitions and to limit the number of pupils to four. The third Olympiad in 1970 was organised in Hungary with the GDR, Romania and the Soviet Union as new countries. In this competition, more than three prizes were distributed to the pupils.

There was no Olympiad held in 1971, as at the end of the competition in 1970, an organiser and host for the next event could not be agreed on. This was solved for the next three years by diplomatically agreeing on the Soviet Union to host 1972, Bulgaria in 1973, and Romania in 1974. 1972 was the first time where preparation tasks for the International Chemistry Olympiad were created. Also, at a jury session, it was suggested that invitations should be sent to Vietnam, Mongolia, and Cuba. Unfortunately though, these invitations were not sent, leaving seven to compete in 1973.

In 1974, Romania invited Sweden and Yugoslavia to the Olympiad in Bucharest and Germany and Austria sent observers. The Federal Republic of Germany was the first NATO-country with an observer present and this was only able to occur because the Brandt government had contracts in the East. Thus, in 1975, West Germany, Austria, and Belgium also participated in the International Chemistry Olympiad.

The first Olympiad in a non-socialist country took place 1980 in Linz in Austria, although the Soviet Union did not participate. Since then the number of the participating countries has increased steadily. In 1980, only 13 nations took part but this number increased to 21 by the 1984 Olympiad in Frankfurt/Main. With the fall of the Iron Curtain and the break-up of the Soviet Union into independent states in the early 1990s, the number of participants increased again. In addition, the increasing interest of Asian and Latin American countries became apparent with the numbers of participants. Altogether 47 delegations participated in 1998. Presently, 68 countries participate in the International Chemistry Olympiad.

Preparatory problems, final results, and the theoretical and practical examinations from each competition can be found on the respective IChO's website.