Dame Ellen Patricia MacArthur, DBE (born 8 July 1976) is an English sailor, up until 2009, from Whatstandwell near Matlock in Derbyshire, now based in West Cowes, on the Isle of Wight. She is best known as a solo long-distance yachtswoman. On 7 February 2005 she broke the world record for the fastest solo circumnavigation of the globe, a feat which gained her international renown. Francis Joyon, the Frenchman who had held the record before MacArthur, recovered the record again in early 2008, besting MacArthur's record by nearly two weeks.[1] Following her retirement from professional sailing on 2 September 2010, Ellen announced the launch of the Ellen MacArthur Foundation, a charity set up to inspire people to re-think, re-design and build a sustainable future.

Ellen MacArthur was born in Derbyshire where she lived with her parents and two brothers, Fergus and Lewis. She acquired her early interest in sailing, firstly by her desire to emulate her idol at the time, Sophie Burke and, secondly by reading Arthur Ransome's Swallows and Amazons series of books. She has since become the Patron of the Nancy Blackett Trust[2] which owns and operates Ransome's yacht, Nancy Blackett. Her first experience of sailing was on a boat owned by her Aunt Thea MacArthur on the east coast of England. She saved her school dinner money for eight years in order to buy her first boat, an eight foot dinghy, which she named Threp'ny Bit even though decimalisation had taken place before she was born. She sellotaped a real Threp'ny Bit onto the bow.

When she was 17, MacArthur bought a Corribee named Iduna, she described the first moment she saw it as "love at first sight". In 1995 she sailed Iduna single-handed on a circumnavigation of Great Britain.

In 1997 she finished 17th in the Mini Transat solo transatlantic race after fitting out her 21 ft (6.4 m) yacht Le Poisson herself while living in a French boatyard.

She was named 1998 British Telecom/Royal Yachting Association "Yachtsman of The Year" in the UK and "Sailing's Young Hope" in France.

Asteroid 20043 EllenMacArthur is named after her.[3]

She first came to general prominence in 2001 when she came second in the Vendée Globe solo round-the-world sailing race in her boat Kingfisher (named after her sponsors, Kingfisher plc), and subsequently MacArthur was appointed MBE for services to sport.

In 2003 she captained a round-the-world record attempt for a crewed yacht in Kingfisher 2 (a catamaran formerly owned by Bruno Peyron and known as Orange), but was thwarted by a broken mast in the Southern Ocean. 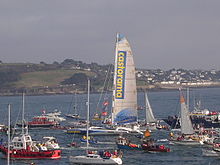 Ellen MacArthur on her arrival in 2005.

A trimaran named B&Q/Castorama (after two companies in the Kingfisher group) unveiled in January 2004, was specially designed by Nigel Irens and Benoit Cabaret for her to break solo records. The 75-foot (23 m) trimaran was built in Australia, with many of the components specifically arranged to take into account MacArthur's 5 foot 2 inch (1.57 m) height.[citation needed]

Using the yacht, her first significant record attempt in 2004 to break the west–east transatlantic crossing time failed by around one and a quarter hours, after over seven days of sailing.

She began her attempt to break the solo record for sailing non-stop around the world on 28 November 2004. During her circumnavigation, she set records for the fastest solo voyage to the equator, past the Cape of Good Hope, past Cape Horn and back to the equator again. She crossed the finishing line near the French coast at Ushant at 22:29 UTC on 7 February 2005 beating the previous record set by French sailor Francis Joyon by 1 day, 8 hours, 35 minutes, 49 seconds. Her time of 71 days, 14 hours, 18 minutes 33 seconds is world record for the 27,354 nautical miles (50,660 km) covered. This is an average speed of 15.9 knots (29.4 km/h).

On 8 February 2005, following her return to England, it was announced that she was to be appointed Dame Commander of the Order of the British Empire in recognition of her achievement.[4] It is believed that she is the youngest ever recipient of this honour. Coming immediately after the event being recognised, rather than appearing in due course in the New Year's or Birthday honours lists, this recognition was reminiscent of the knighthoods conferred upon Francis Drake and Francis Chichester upon arrival home after their respective circumnavigations in 1580 and 1967. MacArthur was also made an honorary Lieutenant Commander of the Royal Naval Reserve on the same day.

In recognition of her achievement she was awarded the French Légion d'Honneur Knight by Nicolas Sarkozy in March 2008. She is a fluent French speaker.[5]

In October 2009 MacArthur announced her intention to retire from competitive racing to concentrate on sustainability.[7][8]

On 2 September 2010, she launched the Ellen MacArthur Foundation. A charity focussing on providing a positive framework for sustainable innovation using insights from living systems to re-think the future. The Foundation works primarily in Education for 14-19yrs & Higher Education and investigates the opportunities for young people in a future sustainable economy.

MacArthur's second place in the 2000-2001 edition of the Vendée Globe, with a time of 94 days, 4 hours and 25 minutes, is the world record for a single-handed, non-stop, monohull circumnavigation by a woman.[10]

In 2005, MacArthur beat Francis Joyon's existing world record for a single-handed non-stop circumnavigation. MacArthur in the trimaran B&Q/Castorama sailed 27,354 nautical miles (50,660 km) at an average speed of 15.9 knots.[12] Her time of 71 days, 14 hours, 18 minutes 33 seconds beat Joyon's then world record time by 1 day, 8 hours, 35 minutes and 49 seconds. Ellen had no more than 20 minutes' sleep at a time, having to be on constant lookout day and night. On 23 November 2007 Joyon set off in IDEC II in an attempt to beat MacArthur's current world record for a single handed circumnavigation. He achieved his goal in 57 days, 13 hours 34 minutes and 6 seconds.[1]

Critics of MacArthur's voyage emphasise the differences in the technological capabilities of present-day sailing vessels against those used by previous record holders.[13]

MacArthur's tearful video diaries recording the sailing adversities she faced inspired the caricature of her on the BBC satirical comedy show Dead Ringers. In Episode 5 of Series 1 of a BBC Sci-fi sitcom, Hyperdrive, a MacArthur-like character, Clare Winchester, a round-the-galaxy solo spacewoman played by Sally Phillips, is parodied with references to video diaries, a diminishing grip on reality and friendlessness.

MacArthur was also the last record holder on Star in a Reasonably-Priced Car on the BBC's Top Gear television driving programme until the eighth series, when the car and rules were changed, and previous records were removed.[14] The competition was a timed lap of a racetrack in a Suzuki Liana. She completed the lap in 1 minute 46.7 seconds, beating Jimmy Carr by 0.2 seconds.

In 2002, Dame Ellen released her first autobiography entitled 'Taking on the World'. This detailed her life and journey up until the printing date. The Observer describes the book as:

The first true heroine of the twenty-first century.

In September 2010, Dame Ellen published a second autobiography entitled 'Full Circle'. This also details her life and journey up until the printing date.

These books are currently available at many bookshops and also online. Some websites include Amazon and it is also available in electronic format on iBooks.

In 2003, MacArthur set up the Ellen MacArthur Trust (now The Ellen MacArthur Cancer Trust), a registered charity,[15] to take young people, aged between 8 and 24 inclusive, sailing to help them regain their confidence, on their way to recovery from cancer, leukaemia and other serious illnesses. In Ellen’s words:

"These are really special kids. In many ways they are just the same as everyone else, they are interested in the same things as kids their age, they have the same goals in life, but the difference is that they do this with a huge challenge ahead of them. I face challenges out on the water, but these are challenges that I choose to do. They on the other hand don't have this luxury. They battle against something harder than many of us could ever imagine and they do it with the biggest smiles on their faces. To me they are truly inspirational and if the Ellen MacArthur Trust can help them in their battle in any way then that is a fantastic achievement."

In 2008 MacArthur joined forces with other sports celebrities to launch an appeal to raise £4 million for the Rainbows children's hospice. The aim is to give terminally ill young people their own customised sleeping unit to enable children in separate age groups to have their families stay with them.[16]

After retiring from sailing, MacArthur founded the Ellen MacArthur Foundation in order to promote sustainability. One of the Foundation's ventures was launching a programme called Project ReDesign where students from school are asked to redesign some aspects of the future. [17]