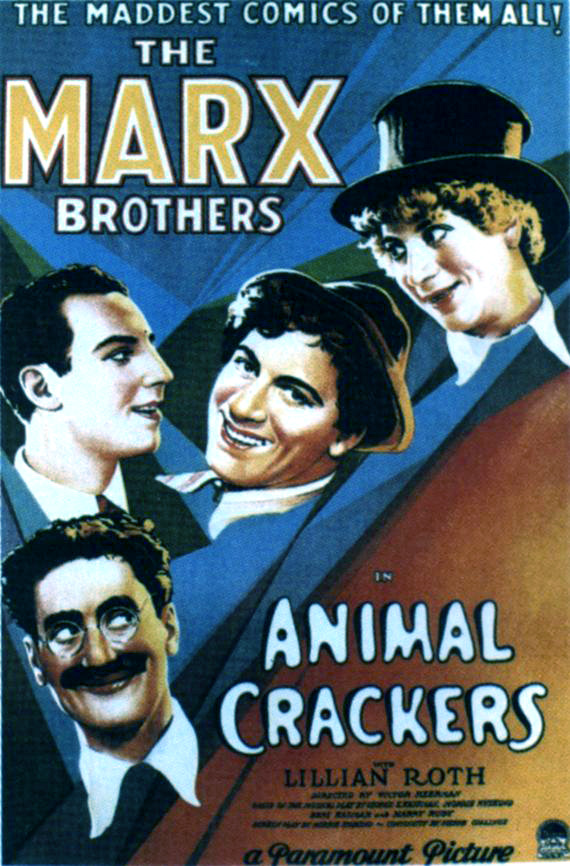 "Animal Crackers" is a 1930 , in which mayhem and zaniness ensue when a valuable painting goes missing during a party in honor of famed African explorer Captain Spaulding. The film was both a critical and commercial success upon initial release, and remains one of the ' most beloved and often-quoted movies.

The film stars the four brothers, , , , and , as well as and . It was directed by and adapted from a successful 1928 Broadway play by and , also starring the Marx Brothers and Margaret Dumont. (See "Animal Crackers").

The part of Hives the butler was played by Robert Greig, a character actor who appeared in over 100 films (many in the role of a butler). He also appeared with the Marx Brothers in "".A 15-second clip of the Marx Brothers, filmed in on the set of "Animal Crackers" during the Captain Spaulding scene, was recently discovered (see "External Link" section below).

The plot concerns Groucho, as explorer Captain Geoffrey T. Spaulding, attending a party in his honor at the estate of society matron Mrs. Rittenhouse, and investigating the theft of a valuable painting during the party.

* as "Captain Spaulding" [The opening credits say "Captain Jeffrey Spaulding". The newspaper article shown immediately after the credits says "Captain Geoffrey T. Spaulding"]
* as "The Professor"
* as "Signor Emanuel Ravelli"
* as "Horatio Jamison" and Captain Spaulding in one scene
* as "Mrs. Rittenhouse"
* as "Arabella Rittenhouse"
* as "Roscoe W. Chandler"
* as "John Parker"
* as "Mrs. Whitehead"
* as "Grace Carpenter"
*Robert Greig as "Hives"
* as "Inspector Hennessey"

: "Then, we tried to remove the tusks, ... but they were embedded in so firmly, we couldn't budge them. Of course, in Alabama the Tusk-a-loosa. But that's entirely ir-elephant to what I was talking about."

: "We took some pictures of the native girls, but they weren't developed. But we're going back again in a couple of weeks!"

They got away with that joke, but the censors cut a line from the song "Hooray for Captain Spaulding" in which Spaulding sang, in an aside about Mrs. Rittenhouse, "I think I'll try and make her", as in "seduce her".

The song was a hidden reference to a real Captain Spaulding, an army officer arrested a few years earlier for selling cocaine to Hollywood residents. See "", by . Groucho later used a somewhat jazzed-up version of the Spaulding song as the theme music for his TV quiz show, "", and it ultimately became his all-purpose introductory theme in general.

Other quotes from Groucho:

:"There's one thing I've always wanted to do before I quit: Retire."

:"I was outside the cabin smoking some meat. There wasn't a store in the neighborhood!"

The film also showcases the well-known Chico-Harpo scene in which Chico keeps asking Harpo for "a flash" (meaning a flashlight), and Harpo—not understanding—produces from his bottomless trenchcoat and baggy pants a "fish", a "flask", a "flute", a "flush", etc. Eventually he begins searching for the flashlight in the dark with a flashlight. Immediately after successfully pulling out the flashlight, thunder is heard and the lights go out.

The often under-utilized Zeppo figures in a well-known gag in which Groucho dictates a letter to his lawyers, in rambling pseudo-legalese. Zeppo gets to one-up Groucho: When asked to read the letter back, Zeppo informs him, "You said a lot of things I didn't think were very important, so I just omitted them!" whereupon a minor skirmish ensues.

Forty-four years after its original release, in June 1974, "Animal Crackers" was once again released in theaters. The film had been tied up in a dispute since 1957, when Universal Pictures -- which owned all pre-1948 Paramount films -- renewed the copyright for the picture but neglected to renew the music rights or the rights to the original Broadway play. The 1974 re-release was big news at the time since the Marx Brothers were enjoying a resurgence in popularity among younger audiences. At the re-release premiere, which attended, a riot broke out and he required police escort.

Groucho's songs, "Hello, I Must Be Going" and "", both written by and , became recurring themes for Groucho through the years. The latter song became the theme of Groucho's radio and TV game show "". The original full version of "Hooray for Captain Spaulding" was edited in compliance to the Hays Code when it was re-released in 1936: the sexually suggestive line "I think I'll try and make her" was removed - it came after Mrs. Rittenhouse's line: "He was the only white man to cover every acre." The only known recording of the original dialogue can be heard on the CD Boxed Set "The Marx Brothers Sing & Play" issued in 1995 & 2000 by Chansons Cinema, and made from un-edited European prints of the film.
*You Must Do Your Best Tonight (Hives and Footmen)
*I Represent (Zeppo)
* Part I (The Cast) [cite web |url=http://members.tripod.com/Cleo256/marx/spaulding.html |title=Lyrics to Hooray for Captain Spaulding |accessdate=2007-04-02 |last= |first= |authorlink= |coauthors= |date= |year= |month= |format= |work= |publisher= |pages= |language= |archiveurl= |archivedate= |quote= ]
*Hello, I Must Be Going (Groucho)
*Hooray for Captain Spaulding Part II (Cast)
*Gypsy-chorus
*Why Am I So Romantic? (John)
*I'm Daffy Over You
*Silver Threads Among the Gold
*My Old Kentucky Home (Marx Brothers)

* "Hello, I Must Be Going" became a theme in 's miniseries "". It was the title of the final episode, and sung by villain Senator Kreutzer () as he died. also titled his second album after the song.