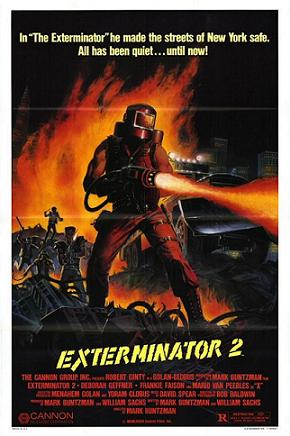 Following somewhat incongrously from the previous film, it shows Eastland walking freely on the streets of New York, without any hint that his dual identity was compromised. He meets up with another old army buddy, Bee Gee (), who owns a garbage truck. As seen at the beginning of the film, Eastland wears a welders' mask and wields a flame thrower, while listening to a police scanner for possible crimes to stop. Slaying the brother of a gang leader named X, the Exterminator gains the gang's enimity. Coincidentally, his army buddy happens to see the gang during a robbery of an armoured car, and scares them away with his truck. However, they get the truck's plate numbers, and vow revenge. Following the truck one night when the buddy loans it to Eastland, they follow Eastland to his home, and, not having seen who the driver of the truck was the night it scared them away, they presume Eastland was the man behind the wheel that night. They attack Eastland's girlfriend in the park, crippling her. Later, they break into her apartment and kill her.

Then Eastland and his buddy interrupt a drug deal between X's gang and the mob, stealing the narcotics in the process, though the army buddy dies. Having earlier captured one of the gang members, Eastland allows him to escape to draw X into a confrontation, with the drugs as bait, in a closed up industrial site. Curiously, X seems to be aware of the Exterminator's real name in this final battle. Eastland triumphs, but was shot when last seen, and is seen walking away. There were no further Exterminator movies.

* X: [To John Eastland] You want to clean out the streets? *I am* the streets!

* [After stabbing down a woman] Turbo: I like it when their faces go crazy like that, when they think the world has gone psycho and there's no way out... [The Exterminator shows up and torches Turbo and his buddy]