Verapamil (brand names: Isoptin, Verelan, Verelan PM, Calan, Bosoptin, Covera-HS) is an L-type calcium channel blocker of the phenylalkylamine class. It has been used in the treatment of hypertension, angina pectoris, cardiac arrhythmia, and most recently, cluster headaches.[1] It is also an effective preventive medication for migraine. Verapamil has also been used as a vasodilator during cryopreservation of blood vessels. It is a class IV antiarrhythmic, more effective than digoxin in controlling ventricular rate,[citation needed] and was approved by the U.S. Food and Drug Administration (FDA) in March 1982.[2]

Verapamil's mechanism in all cases is to block voltage-dependent calcium channels.

In cardiac pharmacology, calcium channel blockers are considered class IV antiarrhythmic agents. Since calcium channels are especially concentrated in the sinoatrial and atrio-ventricular nodes, these agents can be used to decrease impulse conduction through the AV node, thus protecting the ventricles from atrial tachyarrhythmias.

The pain of angina is caused by a deficit in oxygen supply to the heart. Calcium channel blockers like Verapamil will dilate blood vessels, which increases the supply of blood and oxygen to the heart. This controls chest pain, but only when used regularly. It does not stop chest pain once it starts. A more powerful venodilator such as nitroglycerin may be needed to control pain once it starts.

Verapamil is also used intra-arterially to treat cerebral vasospasm.[3] Verapamil has been used to treat cluster headaches,[4] but it can also cause headaches as a side effect.

Given orally, 90–100% of Verapamil is absorbed, but due to high first-pass metabolism, bioavailability is much lower (10–35%). It is 90% bound to plasma proteins and has a volume of distribution of 3–5 L/kg. It is metabolized in the liver to at least 12 inactive metabolites (though one metabolite, norverapamil, retains 20% of the vasodilating activity of the parent drug). As its metabolites, 70% is excreted in the urine and 16% in feces; 3–4% is excreted unchanged in urine. This is a non-linear dependence between plasma concentration and dosage. Onset of action is 1–2 hours after oral dosage. Half-life is 5–12 hours (with chronic dosages). It is not cleared by hemodialysis.

Verapamil has been reported to be effective in both short-term[5] and long-term treatment of mania and hypomania.[6] Addition of magnesium oxide to the verapamil treatment protocol enhances the antimanic effect.[7] It has on occasion been used to control mania in pregnant patients, especially in the first 3 months. It does not appear to be significantly teratogenic. For this reason, when one wants to avoid taking valproic acid (which is high in teratogenicity) or lithium (which has a small but significant incidence of causing cardiac malformation), Verapamil is usable as an alternative, albeit presumably a less effective one. 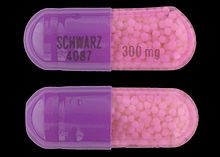 Along with other calcium channel blockers, verapamil is known to induce gingival hyperplasia.

Acute overdose is often manifested by nausea, asthenia, bradycardia, dizziness, hypotension and cardiac arrhythmia. Plasma, serum or blood concentrations of verapamil and norverapamil, its major active metabolite, may be measured to confirm a diagnosis of poisoning in hospitalized patients or to aid in the medicolegal investigation of fatalities. Blood or plasma verapamil concentrations are usually in a range of 50-500 μg/L in persons on therapy with the drug, but may rise to 1–4 mg/L in acute overdose patients and are often at levels of 5–10 mg/L in fatal poisonings.[8][9]

Verapamil is also used in cell biology as an inhibitor of drug efflux pump proteins such as P-glycoprotein.[10] This is useful as many tumor cell lines overexpress drug efflux pumps, limiting the effectiveness of cytotoxic drugs or fluorescent tags. It is also used in fluorescent cell sorting for DNA content, as it blocks efflux of a variety of DNA-binding fluorophores such as Hoechst 33342. Radioactively-labelled verapamil and positron emission tomography can be used with to measure P-glycoprotein function.[11]

Potential use in the treatment of malaria

Recent resistance to the anti-malarial drug chloroquine has hindered the treatment of malaria in Southeast Asia, South America and Africa. Resistance to chloroquine is caused by the parasite cell's ability to expel the drug outside of its digestive vacuole. It has been shown that verapamil, when used in combination with chloroquine, enhances the accumulation of chloroquine within a parasitic cell's digestive vacuole, rendering it incapable of detoxifying itself and making it more susceptible to death.[12][13]