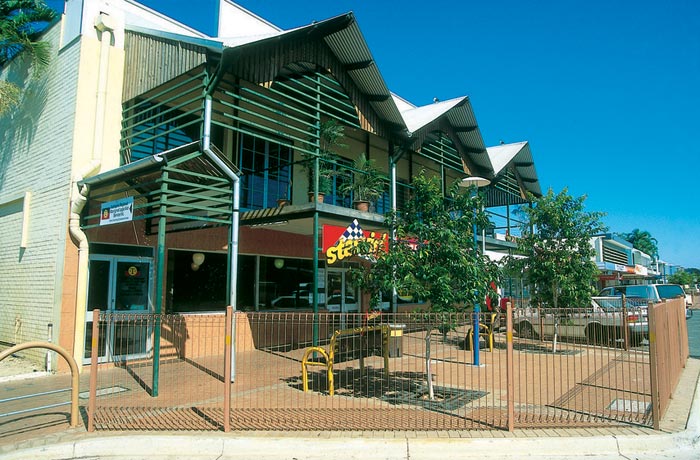 Katherine is a town situated 320 km southeast of Darwin in the "Top End" of the , . It is the third largest settlement in the territory after the capital Darwin and . At the 2001 census, Katherine had a population of 6,488.

Set in promising grazing and future agricultural country, the town's main economic source has often been , but this has lessened after the closing of the mine at Mt Todd. There is increasing tourism and the 17 km southeast of town is also contributing to the economy. The town has several churches, sporting clubs, parks, a well kept course, and a showground.

The well known and spectacular in the near the town has many ancient rock paintings. These often become flooded during "the wet season" as the river can rise 18 m in the narrow passage. In a particularly wet season, the paintings higher up can become flooded, damaging these ancient treasures.

The Park features many activities such as camping, swimming, fishing (lures only), sightseeing, canoeing, boat cruises and bush walk trails.Butterfly Gorge, within a 6 km walk across the escarpment from the visitor centre, features a large valley filled with lush monsoon rainforest that extends down to the river.Nitmiluk also features the country's ultimate buswalking experience, the Jatbula Trail, an extended trail winding some 46 km over stunning landscapes stretching from the gorge to Edith Falls to the north.

The town was given its name after the daughter of one of the sponsors of who first saw the area in 1862. The original inhabitants of the area belong to the , Dagoman and language groups.

Katherine is situated on the banks of the , which is part of the Daly River system. The upper reaches rise into the escarpment and Kakadu to the north east. The topography of the region is predominantly tropical woodland. The township of Katherine is set amongst a Karst landscape of ancient limestone formations, outcrops, and subterranean caves. Other ecosystems include open forest and rocky escarpment country and isolated pockets of monsoon rainforest/vine thickets. Katherine is located 320 km south of Darwin and has a climate with distinct wet and s. The annual rainfall is 1,132mm and daily temperatures normally range from 24° – 35°C, occasionally reaching 40°C with very high humidity at times during the build-up period to the wet season, when the region begins to receive some of the country's most spectacular electrical storms along with vigorous lightning displays. Dry season nights can get quite cool, regularly dropping to 7°C overnight in the middle of the dry season.

Low elevation and frequent rainfall, as well as the town's situation on the banks of a river, means that the area is prone to ing. A flood on in 1998 was particularly destructive. Ex- produced between 300 and 400 millimetres of rainfall during a 48 hour period, causing the Katherine River to rise to 21.3 metres and claim the lives of three people. [cite web |url=http://www.katherine.nt.gov.au/about_katherine/town_of_katherine/floods |title=Katherine Town Council - Town of Katherine/Floods|accessdate=2007-05-20 |format=html]

Floods are not just the only threat the town faces every wet season. Severe thunderstorms and lightning are also familiar dangers every wet season. Large hail to 2,5cm diameter has also been reported within the area. Katherine is also located in one of the most lightning struck areas in the southern hemisphereFact|date=July 2008 and caution should be heeded outdoors in the summer months.

The central business district of Katherine is set 350 metres from the banks of the Katherine River. The township services the other regional centres of Pine Creek, Mataranka, Borooloola, , Daly River and .

The RAAF Tindal Base is located 17 km from Katherine and plays a significant part in the local economy. Tindal Airbase officially opened on 1 October 1988.

Springvale Homestead, built in 1879, is the oldest original homestead in the . The homestead was originally managed by Alfred Giles, an ex-Overland Telegraph linesman, but is now open to visitors. The Old Katherine Railway Station is another historic attraction that served during their operation in Darwin and was a major hub of transport during .

Another historic site is the O’Keeffe Residence. Originally built as a recreation hut in 1943 for army officers during the Second World War, it is a good example of local construction practice, using local materials like Cypress pine and corrugated iron.

Since the establishment of , Katherine has developed into a tourism destination. in Nitmiluk National Park attracts large numbers of visitors each year (232,000 in 2004-05). [ [http://www.tourismnt.com.au Tourism NT] "Tourism NT (www.tourismnt.com.au)"] The town is well-equipped with a shopping centre and other modern conveniences and services.

Along Riverbank Drive on the Katherine River, Katherine Hot Springs provide swimming, shaded picnic tables and BBQ facilities set amongst monsoon forest and tall paperpark trees where you can sit back and relax or enjoy the abundant birds and wildlife.

Fishing for , and is also popular along the Katherine River.The low level Nature Reserve and the hot springs are regarded safe to swim.Both freshwater and saltwater crocodiles inhabit the river, always make sure you swim in recommended safe areas and avoid swimming in remote 'suspicious' waters.

The town has had several locations since its settlement by , and the present site was gazetted on . The original post office and the Overland Telegraph station were set just above Knott's Crossing and next to the Sportsman's Arms Hotel that had quarters for the station master at the station and a single room police station.The , after which the town and the nearby gorge are named, was named by when he passed through the area in 1862 on his sixth successful journey across the continent. On , Stuart crossed the Katherine River and recorded in his diary: "Came upon another large creek, having a running stream to the south of west and coming from the north of east. This I have named 'Katherine', in honour of the second daughter of James Chambers Esq." There is some conjecture over Stuart's accuracy. Chambers's wife's name was Katherine but, according to most sources, his daughter's name was Catherine. The next stage of development of Katherine was the establishment of the Katherine Telegraph Station on and the completion of the Overland Telegraph Line later in 1872. It was not until 1923 that construction began on the Katherine railway bridge, with construction completed in 1926. All shops were then moved to the opposite side of the river, where the town of Katherine now sits. The first train crossed the bridge on .

Construction began on a new rail line in July 2001. On , the line was finished with a continuous track from to Darwin. passenger train commenced on and runs several times a week. It stops in Katherine on both the northbound and southbound journeys.

Dr. Clyde Fenton of Katherine became one of the first Flying Doctors in Australia when he raised £500 to buy a plane for his medical run. He soon earned himself the name of "Speed Gordon of the Territory Skies".

Katherine has a history of flooding, with documented accounts in 1957, 1974, and 1998 (on ). The 1998 flood devastated the town, and the area was declared a national disaster. The flood resulted from the 300-400 mm of rainwater brought by that caused the already full to rise an additional 21.3 metres. The floodwaters inundated the town and much of the surrounding region, requiring the evacuation of many residents.

Katherine suffered another serious flood in April 2006 with the floodwaters peaking at 19 metres. Damage, however, was not extensive, and the town recovered quickly.

Katherine is an important meeting place to the local Aboriginal people. It is the point where the traditional lands of the Jawoyn (sometimes spelt Djauan), Dagoman, and Wardaman converged. With Katherine being the largest town in the region, it remains a meeting point for Aboriginal people from across the Katherine Region.

The local government consists of five aldermen, a mayor, and a deputy mayor. There are an additional ten local community councils that administer the region and primarily service the Indigenous people of the region. [ [http://www.nt.gov.au/lant/members/Members.shtml Legislative Assembly of the Northern Territory] ] The town's current mayor is Anne Shepherd.

The Katherine electorate, which covers the town and its suburbs, elects one member to the . At federal level, the town, as with all parts of the Northern Territory outside Darwin, is located within the . Katherine is a solid base for the centre-right .

The Pastoral industry, mining, defence (RAAF Tindal) and tourism all play a major part in the economy of Katherine. In 2003-04, the estimated total value of agriculture production from the Katherine region was $75M; $52M from cattle, $16.5M from fruit and vegetables and $7M from hay and other field crops. Production from mining in the region was estimated at $201M in 2003-04, or 13% of NT mining and energy production. Major commodities included lead, zinc, barites, limestone and gravel. [ [http://www.nt.gov.au/business/documents/general/regional_info_katherine.pdf NT Government] "NT Government (www.nt.gov.au)"]

The population of the town of Katherine was 8,437 in 2004 and the total regional population was 17,212 of which, 29% identify themselves as Indigenous. Tourist visitor numbers were 280,000 in the same year. [ [http://www.nt.gov.au/business/documents/general/regional_info_katherine.pdf NT Government] "NT Government (www.nt.gov.au)"]

Katherine was connected to Darwin via the a which was completed in 1926. It fell into disuse and was eventually closed and the tracks lifted. In 2003 the line was replaced with as part of extending the line to north to Darwin.

, run by , operates on the new extension between Adelaide and Darwin. It arrives twice weekly in each direction and has a scheduled stop in the town. [Australian Railmaps, " [http://www.railmaps.com.au/central.htm "RAIL MAP - PERTH to ADELAIDE, CENTRAL AND NORTHERN AUSTRALIA"] ". Accessed , .]

Katherine airport is 7 km south of the town centre. No commercial flights are available to Katherine; however, charter flights can be arranged, and the town is only a two and a half to three hour drive from Darwin.

Katherine High School is the only public secondary and middle years school in the town and supports good academic, sporting, and scientific learning oppourtunities for its students. The current principal is Ken Barnes. The music department is run by Louise Doyle and Micheal Dalvean and recently came very close to winning the concert band Eisteddfod run in Darwin.The school library has a wide range of written and computer resources.

Leisure and entertainment activities in Katherine are mostly nature-based. Katherine Hot Springs, Mataranka Hot Springs, canoeing in Nitmiluk Gorge on the Katherine River, hunting, bushwalking, caving, camping and fishing on the Victoria, Daly, Roper or Katherine Rivers are all popular leisure activities.Although attempts are made to safely relocate saltwater crocodiles from areas of the river popular to tourists, these crocodiles do inhabit most of these river systems and extreme care should be taken in and around the water at all times.The town also has a nightclub, a few pubs and sports/social clubs.

The Katherine Region was popularised by the novel ‘We of the Never Never' by Jeannie Gunn who was the wife of a pioneering pastoralist in the late 1800s. The feature film Jedda was partially filmed at Katherine Gorge, however, the last roll of negatives was destroyed in a plane crash on its way for developing in England and the scenes were re-shot at Kanangra Falls in the Blue Mountains.The Australian horror film Rogue, released in 2007, was partly filmed in Katherine Gorge.

The runs through the north of the town, which it badly flooded in 1998 and 5-7 April 2006. The April 2006 floods placed parts of the town under water including about 50 houses, caused millions of dollars worth of damage, and caused the declaration of a state of emergency in the area on 7th April. [ [http://www.theage.com.au/news/National/NT-govt-declares-emergency-in-Katherine/2006/04/07/1143916681681.html The Age] "The Age (www.theage.com.au)" ] However, there was no reports of structural damage due to the flooding. [ [http://www.abc.net.au/news/newsitems/200604/s1611835.htm ABC News] "ABC News (www.abc.net.au)"] The town residents were given warning that the river might flood on Wednesday 5th April, and the town centre was underwater before noon the next day. [ [http://www.abc.net.au/news/newsitems/200604/s1611793.htm ABC News] "ABC News (www.abc.net.au)"] The floodwaters reached a peak of nearly 19 metres at the Katherine River bridge. Dozens of homes were inundated with up to 2 m of water, with many residents having time to escape with little more than the clothes they were wearing. Over the weekend of the 8th-9th there were over 1100 people who went to the evacuation centres in the town. The state of emergency was lifted on the 9th of April.