Colostrum (also known colloquially as beestings,[1] bisnings[2] or first milk) is a form of milk produced by the mammary glands of mammals in late pregnancy. Most species will generate colostrum just prior to giving birth. Colostrum contains antibodies to protect the newborn against disease, as well as being lower in fat[3] and higher in protein than ordinary milk. 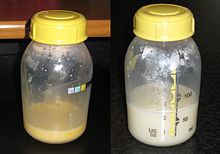 Newborns have very small digestive systems, and colostrum delivers its nutrients in a very concentrated low-volume form. It has a mild laxative effect, encouraging the passing of the baby's first stool, which is called meconium. This clears excess bilirubin, a waste product of dead red blood cells, which is produced in large quantities at birth due to blood volume reduction, from the infant's body and helps prevent jaundice. Colostrum is known to contain antibodies called immunoglobulins such as IgA, IgG, and IgM in mammals. IgA is absorbed through the intestinal epithelium, travels through the blood, and is secreted onto other Type 1 mucosal surfaces. These are the major components of the adaptive immune system. Other immune components of colostrum include the major components of the innate immune system, such as lactoferrin,[4] lysozyme,[5] lactoperoxidase,[6] complement,[7] and proline-rich polypeptides (PRP).[8] A number of cytokines (small messenger peptides that control the functioning of the immune system) are found in colostrum as well,[9] including interleukins,[9] tumor necrosis factor,[10] chemokines,[11] and others. Colostrum also contains a number of growth factors, such as insulin-like growth factors I,[12] and II,[13] transforming growth factors alpha,[14] beta 1 and beta 2,[15][16] fibroblast growth factors,[17] epidermal growth factor,[18] granulocyte-macrophage-stimulating growth factor,[19] platelet-derived growth factor,[19] vascular endothelial growth factor,[20] and colony-stimulating factor-1.[21]

Colostrum is very rich in proteins, vitamin A, and sodium chloride, but contains lower amounts of carbohydrates, lipids, and potassium than normal milk. The most pertinent bioactive components in colostrum are growth factors and antimicrobial factors. The antibodies in colostrum provide passive immunity, while growth factors stimulate the development of the gut. They are passed to the neonate and provide the first protection against pathogens.

Colostrum is crucial for newborn farm animals. They receive no passive transfer of immunity via the placenta before birth, so any antibodies that they need have to be ingested. This oral transfer of immunity can occur because the newborn's stomach is porous. This means that large proteins (such as antibodies) can pass through the stomach wall. The newborn animal must receive colostrum within 6 hours of being born for maximal transfer of antibodies to occur. The stomach wall remains somewhat open up to 24 hours of age, but transfer is more limited.[22]

Livestock breeders commonly bank colostrum from their animals. Colostrum can be stored frozen but it does lose some of its inherent quality. Colostrum produced on a breeder's own premises is considered to be superior to colostrum from other sources, because it is produced by animals already exposed to (and, thus, making antibodies to) pathogens occurring on the premises. A German study reported that multiparous mares produced on average a liter (quart) of colostrum containing 70 grams of IgG.[23]

Bovine colostrum is produced by cows for their newborn calves. In many dairy cow herds the calves are not permitted to nurse; rather, they are fed colostrum from a bottle or by stomach tube and later milk from a bottle then a bucket.

Assertions that colostrum consumption is of human benefit are questionable because most ingredients undergo digestion in the adult stomach, including antibodies and all other proteins. Bovine colostrum and its components are safe for human consumption, except in the context of intolerance or allergy to lactose or other components. It shows promise in the treatment or prevention of a variety of disease states.[24][25][26]

Bovine colostrum from pasture-fed cows contains immunoglobulins specific to many human pathogens, including Escherichia coli, Cryptosporidium parvum, Shigella flexneri, Salmonella, Staphylococcus,[27] and rotavirus (which causes diarrhea in infants). Before the development of antibiotics, colostrum was the main source of immunoglobulins used to fight infections. In fact, when Albert Sabin made his first oral vaccine against polio, the immunoglobulin he used came from bovine colostrum.[28] When antibiotics began to appear, interest in colostrum waned, but, now that antibiotic-resistant strains of pathogens have developed, interest is once again returning to natural alternatives to antibiotics, namely, colostrum.[29]

Some athletes have used colostrum in an attempt to improve their performance[30] decrease recovery time,[31] and prevent sickness during peak performance levels.[32][33] Research fails to show a conclusive effect of colostrum on lean body mass.[30][34]

Low IGF-1 levels may be associated with dementia in the very elderly, although causation has not been established.[35] People with eating disorders also have low levels of IGF-1 due to malnutrition,[36] as do obese individuals.[37] Supplementation with colostrum, which is rich in IGF-1, can be a useful part of a weight reduction program.[citation needed] Although IGF-1 is not absorbed intact by the body, it does stimulate the production of IGF-1 when taken as a supplement.[38]

Colostrum also has antioxidant components, such as lactoferrin[39] and hemopexin, which binds free heme in the body.[40]

Hyperimmune colostrum was an early attempt to boost the effectiveness of natural bovine colostrum by immunizing cows with a specific pathogen and then collecting the colostrum after the cow gave birth. This initially appeared very promising as antibodies did appear towards the specific pathogens or antigens that were used in the original challenge. However, upon closer examination and comparison, it was found that IgG levels in natural colostrum towards 19 specific human pathogens were just as high as in hyperimmune colostrum, and natural colostrum nearly always had higher antibody titers than did the hyperimmune version.[27] However, travelan, a drug used to prevent traveller's diarrhoea is made using this method, and has been shown to prevent the disease in up to 90% of people.[41]

These small immune signaling peptides were independently discovered in colostrum and other sources, such as blood plasma, in the United States,[42] and Poland.[43] Hence they appear under various names in the literature, including Colostrinin, CLN, transfer factor and PRP. They function as signal transducing molecules that have the unique effect of modulating the immune system, turning it up when the body comes under attack from pathogens or other disease agents, and damping it when the danger is eliminated or neutralized.[44] At first thought to actually transfer immunity from one immune system to another, it now appears that PRP simply stimulates cell-mediated immunity.[45]

A 2006 study published in the Journal of Experimental Therapeutics and Oncology indicated that PRP may have an impact on the aging process by reducing the spontaneous or induced mutation frequency in the DNA of cells.[46] Such DNA damage is implicated in the general process of aging. The study, which was performed in both hamster and human cells, looked at the impact of PRP on the frequency of defined DNA mutations in these cells as they occur naturally and when induced by various known chemical or physical agents. In cells stressed oxidatively, PRP reduced the frequency of mutation induced by reactive oxygen species (ROS) to nearly background levels in a dose-dependent manner. It is suggested that the antimutagenic properties of PRP are achieved via multiple mechanisms - by decreasing intracellular levels of ROS and so preventing DNA damage and by increasing the efficiency of natural DNA repair mechanisms.

PRP-rich preparations from bovine colostrum have shown some activity against various diseases including viral infections[47] of herpes viruses[48] and HIV,[49] as well as difficult to treat bacterial and fungal infections like Mycobacterium fortuitum[50] and Mycobacterium tuberculosis[51] (cause of tuberculosis), cryptosporidosis in AIDS patients,[52] and candida.[53] Also for various forms of cancer, such as Hodgkin's disease,[54] osteogenic sarcoma,[55] prostate cancer,[56] and others. As an immune modulator, PRP is also effective in disease states characterized by an overactive immune system, such as allergies,[57][58] asthma,[59] and autoimmune diseases.[60]

PRP has some effect in neurodegenerative diseases, especially Alzheimer's disease,[61] but has not yet shown longterm disease retarding effect.[62] A placebo-controlled clinical trial in 106 Alzheimer’s sufferers over 30 weeks was completed in 2002 and the results appeared to demonstrate efficacy in a significant proportion of patients treated.[63] The results showed that approximately 40% of patients taking PRP were stabilized or improved after 15 weeks of therapy, based on an Analysis of Overall Response. 33% of patients continued to show stabilization or improvement after 30 weeks of treatment, although levels of benefit were slightly higher at the 15-week stage of the trial. The dosage regimen used for the trial was 100 micrograms of PRP administered every second day for three weeks followed by a two-week period without PRP.

There is one report of use in patients with intractable epilepsy.[64]