Cypress Hills is a skip-stop station on the BMT Jamaica Line of the New York City Subway, located on Jamaica Avenue in the Cypress Hills neighborhood of northeastern Brooklyn. It is served by the J train at all times. The Z train bypasses when it operates.

This is the northernmost station in Brooklyn on the BMT Jamaica Line. The next stop, 75th Street – Elderts Lane is in Queens.

This elevated station, opened on May 30, 1893, has two track and two side platforms with space for a center track that was never added. Both platforms have beige windscreens and green canopies with brown roofs that run along the entire length.

The station's main entrance is at the south end. A single staircase from each platform leads to an elevated station house beneath the tracks. Inside are three turnstiles and a token booth. Outside of fare control, two street stairs lead to the corners of Hemlock and Crescent Streets.

On the north end of the northbound platform, a single staircases leads to a landing outside of a now closed station house, where a single exit-only turnstile provides exit from the system. A street stair perpendicular to the line leads to Autumn Avenue, which ends at Jamaica Avenue.

The 1990 artwork here is called Five Points of Observation, by Kathleen McCarthy. It affords a view of the street from the platforms and resembles a face when seen from the street. This artwork is also located in four other stations on the Jamaica Line. 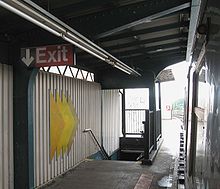 This station was the terminal for the Jamaica Line when it opened.[3] It formerly had an island platform and stub-end located directly along Crescent Street just south of Jamaica Avenue that can still be seen approaching the cemetery east of the station.

When the Jamaica Avenue El was extended east from this station to 111th Street on May 28, 1917 as part of the Dual Contracts, the two side platforms were added and the island platform was removed, which resulted in the large space between the two tracks..