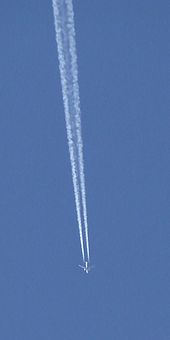 The chemtrail conspiracy theory holds that some trails left by aircraft are actually chemical or biological agents deliberately sprayed at high altitudes for purposes undisclosed to the general public in clandestine programs directed by government officials.[1]

As a result of the popularity of the conspiracy theory, official agencies have received thousands of complaints from people who have demanded an explanation.[1][2] The existence of chemtrails has been repeatedly denied by government agencies and scientists around the world, who say the trails are normal contrails.[3] The United States Air Force maintains that the theory is a hoax which "has been investigated and refuted by many established and accredited universities, scientific organizations, and major media publications".[4] The United Kingdom's Department for Environment, Food and Rural Affairs has stated that chemtrails are not scientifically recognized phenomena.[5] The Canadian Leader of the Government in the House of Commons has rejected the idea of chemtrails as being a "popularised expression", adding that "there is no scientific evidence to support their existence."[6]

The term chemtrail is derived from "chemical trail", in the similar fashion that contrail is a portmanteau of condensation trail. It does not refer to other forms of aerial spraying such as crop dusting, cloud seeding, skywriting, or aerial firefighting.[7] The term specifically refers to aerial trails allegedly caused by the systematic high-altitude release of chemical substances not found in ordinary contrails, resulting in the appearance of characteristic sky tracks. Supporters of this conspiracy theory speculate that the purpose of the chemical release may be for solar radiation management, population control,[1] weather control,[2] or biological warfare/chemical warfare and claim that these trails are causing respiratory illnesses and other health problems.[8][9]

In 1996, a chemtrail conspiracy theory began to circulate when the United States Air Force (USAF) was accused of "spraying the US population with mysterious substances" from aircraft "generating unusual contrail patterns."[4] The Air Force says these accusations were a hoax fueled in part by citations to a strategy paper drafted within the Air Force's Air University entitled Weather as a Force Multiplier: Owning the Weather in 2025.[10][11] The paper was presented in response to a military directive to outline a future strategic weather modification system for the purpose of maintaining the United States' military dominance in the year 2025, and identified as "fictional representations of future situations/scenarios."[11] The Air Force further clarified that the paper "does not reflect current military policy, practice, or capability," and that it is "not conducting any weather modification experiments or programs and has no plans to do so in the future."[4][12] Additionally, the Air Force states that the "'Chemtrail' hoax has been investigated and refuted by many established and accredited universities, scientific organizations, and major media publications."[4]

In Britain, when the Secretary of State for Environment, Food and Rural Affairs was asked "what research her Department has undertaken into the polluting effects of chemtrails for aircraft", the response was that "the Department is not researching into chemtrails from aircraft as they are not scientifically recognised phenomena," but that work was being conducted to understand "how [contrails] are formed and what effects they have on the atmosphere."[5]

In a response to a petition by concerned Canadian citizens regarding "chemicals used in aerial sprayings are adversely affecting the health of Canadians," the Government House Leader responded by stating, "There is no substantiated evidence, scientific or otherwise, to support the allegation that there is high altitude spraying conducted in Canadian airspace. The term 'chemtrails' is a popularised expression, and there is no scientific evidence to support their existence."[6][13][14][15] The house leader goes on to say that "it is our belief that the petitioners are seeing regular airplane condensation trails, or contrails."[6]

Various versions of the chemtrail conspiracy theory have circulated through internet websites and radio programs.[1] In some of the accounts, the chemicals are described as barium and aluminum salts, polymer fibers, thorium, or silicon carbide.[3] In other accounts it is alleged the skies are being seeded with electrically conductive materials as part of a massive electromagnetic superweapons program based around the High Frequency Active Auroral Research Program (HAARP).[16] Those who believe in the conspiracy say the chemtrails are toxic,[17] but the reasons given by those who believe in the conspiracy vary widely, spanning from military weapons testing, chemical population control, to global warming mitigation measures.[2] Scientists and federal agencies have consistently denied that chemtrails exist, insisting the sky tracks are simply persistent contrails.[3] As the chemtrail conspiracy theory spread, federal officials were flooded with angry calls and letters.[3] A multi-agency response to dispel the rumors was published in a 2000 fact sheet by the Environmental Protection Agency (EPA), the Federal Aviation Administration (FAA), the National Aeronautics and Space Administration (NASA) and the National Oceanic and Atmospheric Administration (NOAA), a step many chemtrail believers have interpreted as further evidence of the existence of a government cover-up.[3]

Proponents of the chemtrail conspiracy theory say that chemtrails can be distinguished from contrails by their long duration, asserting that the chemtrails are those trails left by aircraft that persist for as much as a half day or transform into cirrus-like clouds.[2]

According to a United States Air Force contrail fact sheet, contrails, or condensation trails, are "streaks of condensed water vapor created in the air by an airplane or rocket at high altitudes."[4] These condensation trails are the result of normal emissions of water vapor from piston engines and jet engines at high altitudes in which the water vapor condenses into a visible cloud. Contrails are formed when hot humid air from the engines mixes with the colder surrounding air. The rate at which contrails dissipate is entirely dependent on weather conditions and altitude. If the atmosphere is near saturation, the contrail may exist for some time. Conversely, if the atmosphere is dry, the contrail will dissipate quickly.[4]

Chemtrails, coming from "chemical trails" in the same fashion that contrail comes from "condensation trail" is a term coined to suggest that contrails are formed by something other than a natural process of engine exhaust hitting the cold air in the atmosphere. Proponents of chemtrails characterize these chemical trails as streams that persist for hours, and by their criss-crossing, grid-like patterns, or parallel stripes which eventually blend to form large clouds. Proponents view the presence of visible color spectra in the streams, unusual concentrations of sky tracks in a single area, or lingering tracks left by unmarked or military airplanes flying in atypical altitudes or locations as markers of chemtrails.[1][3][8][18][19][20]

A news station reported the results of tests on what they called chemtrails. "It seemed like some mornings it was just criss-crossing the whole sky. It was just like a giant checkerboard," said Bill Nichols, who reportedly noticed the "unusual clouds" begin as normal contrails from a jet engine, but unlike normal contrails, he claims, do not fade away. He then noticed "it would drop to the ground in a haze", the material collecting on the ground and in water he had sitting in bowls. KSLA News 12 sampled the water at a lab and initially reported a high level of barium, 6.8 parts per million, more than three times the toxic level set by the EPA. After contacting the Louisiana Department of Environmental Quality, the news station was told that these levels are very unusual, but proving the source "is a whole 'nother matter". KSLA discovered during their investigation that barium is a hallmark of other chemtrail testing.[21] However the KSLA reporter had misread the reading, which was actually 68 parts per billion, well within expected ranges, and the station retracted the story.[22] The phenomenon attracted the attention of a Los Angeles network affiliate, which aired a similar investigation called "Toxic Sky?"[23] Following suit, Phoenix News Reporter Pat McReynolds at CBS KPHO interviewed Geoengineering[24] investigators and concluded that chemtrails do not exist. 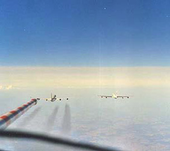 Government agencies and experts on atmospheric phenomena deny the existence of chemtrails, asserting that the characteristics attributed to them are simply features of contrails responding differently in diverse conditions in terms of the sunlight, temperature, horizontal and vertical wind shear, and humidity levels present at the aircraft's altitude.[1][3][4][8][18] Experts explain that what appears as patterns such as grids formed by contrails result from increased air traffic traveling through the gridlike United States National Airspace System's north-south and east-west oriented flight lanes, and that it is difficult for observers to judge the differences in altitudes between these contrails from the ground.[4] The jointly published fact sheet produced by NASA, the EPA, the FAA, and NOAA in 2000 in response to alarms over chemtrails details the science of contrail formation, and outlines both the known and potential impacts contrails have on temperature and climate.[12] The USAF produced a fact sheet as well that described these contrail phenomena as observed and analyzed since at least 1953. It also rebutted chemtrail theories more directly by identifying the theories as a hoax and denying the existence of chemtrails.[3][4]

Patrick Minnis, an atmospheric scientist with NASA's Langley Research Center in Hampton, Virginia, is quoted in USA Today as saying that logic is not exactly a real selling point for most chemtrail proponents: "If you try to pin these people down and refute things, it's, 'Well, you're just part of the conspiracy'," he said.[1]

In 2001, United States Congressman Dennis Kucinich introduced legislation that would have permanently prohibited the basing of weapons in space, and he listed chemtrails as one of a number of exotic weapons that would be banned.[25] Proponents have asserted that because explicit reference to chemtrails was entered by Congressman Kucinich into the congressional record, this constitutes official government acknowledgment of their existence.[18][26] Skeptics note that the bill in question also mentions "extraterrestrial weapons" and "environmental, climate, or tectonic weapons."[27] The bill received an unfavorable evaluation from the United States Department of Defense and died in committee,[28] with no mention of chemtrails appearing in the text of any of the three subsequent failed attempts by Kucinich to enact a Space Preservation Act.

These are peripherally related by contrast as they are not chemtrails.