Tintin in the Land of the Soviets

Tintin in the Land of the Soviets 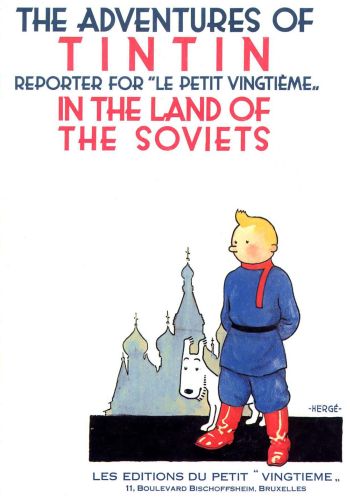 "Tintin in the Land of the Soviets" (originally known as "Les Aventures de Tintin, reporter du Petit "Vingtième", au pays des Soviets") is the first of "", a series of classic comic-strip albums written and illustrated by Belgian writer and illustrator . The series features young reporter Tintin as its hero.

"Tintin in the Land of the Soviets" was published for the first time in "" (the children's supplement to the Belgian newspaper "Le Vingtième Siècle") between , and , , and appeared in album form in 1930.

The story is a political , expressing Hergé's distrust of the and poking fun at its claim to have a thriving economy. According to ' book ("Le monde d'Hergé"), the only source used by Hergé to create his story was the book entitled "Moscou sans voiles" ("Moscow Unveiled") written by Joseph Douillet, a former Belgian consul in Soviet Russia. For such reasons, Hergé decided to withdraw the album from circulation in the 1930s. In 1973, a facsimile edition was launched, that immediately became a best-seller (100,000 copies sold in that year alone).

It is the only early Tintin adventure which Hergé did not redraw or colourise in later years, and, as a result, looks and feels very different from the other books.

Tintin, a for "Le Petit Vingtieme", and his dog Snowy are sent on assignment to the . Departing from , his is blown up en route to by an agent of the Soviet , the OGPU. Tintin survives and is blamed by the authorities in for the "accident". He is put in jail and even taken to a , but escapes (here and in later imprisonments, which are common) by deceit and disguise. He then steals a car and goes through several adventures before eventually reaching Moscow. In observing a , Tintin finds that the Communists coerce people to vote for their list by pointing guns at them, and that apparently productive factories are just hollow shells intended to fool British communists by burning hay to produce smoke and hitting a large sheet of corrugated iron to imitate the sound of machinery. In wandering the streets of Moscow, he discovers that Soviet authorities hand out bread to starving children only if they declare themselves s; if they fail to do so, the children are beaten and refused food. Due to the relegation of the bulk of 's crop to export, so as to maintain the illusion that Russia is wealthy and can therefore afford to send huge quantities away, Moscow is experiencing severe famine. Thus, the Communist leadership plans to pillage productive farms. Tintin manages to save several s by warning them of the approaching troops, but is again captured when he attracts the attention of a military officer. Escaping across the snowy wastes, Tintin stumbles upon the secret cache of riches that , , and have stolen from the Soviet people (including an ample supply of , , and ). Armed with this knowledge, he flees Russia via airplane, landing in in , where he has a final encounter with OGPU agents who attempt to dispose of him before he can reveal what he has seen in the U.S.S.R. Finally returning to , he is greeted with great pomp by the rapturous public, arriving to a tremendous reception in the in .

"Le Petit Vingtième" actually staged a triumphant return of "Tintin" and "Snowy" to the North Brussels train station on Thursday , which was reported in the paper. Hergé was in attendance. A large crowd appeared for the occasion. Playing the part of "Tintin" was 15-year-old Lucien Pepermans (source: "" Tuesday 2 May 2000).