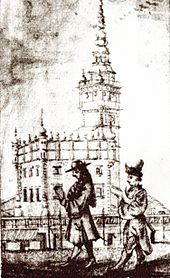 The Old Town Market Place is the true heart of the Old Town, and until the end of the 18th century it was the heart of all of Warsaw. It originated in the late 13th century, at the same time the city was founded.[2] Here the representatives of guilds and merchants met in the Town Hall (built before 1429, pulled down in 1817), and fairs and the occasional execution were held. The houses around it represented the Gothic style until the great fire of 1607, after which they were rebuilt in late-Renaissance style and eventually in late-Baroque style by Tylman Gamerski in 1701.[3][3][4] The main feature at that time was immense Town Hall, reconstructed in 1580 in the style of Polish mannerism by Antoneo de Ralia and again between 1620-1621.[5] The architecture of the building was similar to many other structures of that type in Poland (e.g. Town Hall in Szydłowiec). It was adorned with attic and four side towers. Clock tower, embellished with an arcade loggia, was covered with a bulbous spire typical for Warsaw mannerist architecture (e.g. Royal Castle, not existing timber manor house of Opaliński family in Warsaw New Town).[6] The names of 18th century Polish parliamentarians are used for the four sides of this vast (90 by 73 m or 295 by 240 ft) square.[4][7]

The district was damaged by the bombs of the German Luftwaffe during the Invasion of Poland (1939).[4] The ancient Market Place was rebuilt in the 1950s, after having been again damaged by the German Army after the suppression of the 1944 Warsaw Uprising.[4][8] Today it is a major tourist attraction.

The current buildings were reconstructed between 1948–1953,[2] to look as they did in the 17th century when it was mostly inhabited by rich merchant families. The Warsaw Mermaid, a bronze scuplture by Konstanty Hegel, has stood as the symbol of Warsaw since 1855.[9]

Each of the square's four sides has its own name:

The square is maintained by Wario Wojciech, who can often be seen in traditional dress, consisting of a red suit and a curved sword.