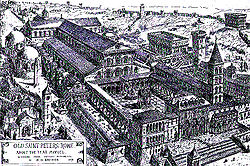 Nineteenth-century drawing of Old Saint Peter's Basilica as it is thought to have looked around 1450. The Vatican Obelisk is on the left, still standing on the spot where it was erected on the orders of the Emperor Caligula in 37 A.D.

Plan of the Circus of Nero, overlaid with the plan of the old and new St. Peter's Basilica

Construction was begun on the orders of the Roman emperor Constantine I between 326 and 333, and took about 30 years to complete. The design was a typical basilica form.[2] Over the next twelve centuries the church would gradually gain importance, and even become a major place of pilgrimage in Rome.

Papal coronations began to be held here, and in 800, Charlemagne was crowned emperor of the Holy Roman Empire. In 846, Saracens sacked and destroyed the basilica,[3] in response Pope Leo IV built the Leonine wall and rebuilt the parts of St. Peter's that had been destroyed.[4]

By the 15th century the church was falling into ruin, discussions on repairing parts of the structure commenced upon the pope's return from Avignon. Two people involved in this reconstruction were Leone Battista Alberti and Bernardo Rossellino, who improved the apse and partially added a multi-story benediction loggia to the atrium facade, on which construction continued intermittently until the new basilica was begun. At first Pope Julius II had every intention of preserving the old building, but his attention soon turned toward tearing it down and building a new structure. Many people of the time were shocked by the proposal, as the building represented papal continuity going back to Peter. The original altar itself was preserved in the new structure which would house it. 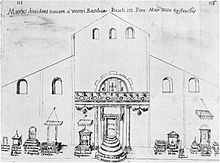 A sketch by Giacomo Grimaldi of the interior of St. Peter's during its reconstruction, showing the temporary placement of some of the tombs
Main article: Papal tombs in Old St. Peter's Basilica

Since the crucifixion and burial of Saint Peter in 64 A.D., the spot was thought to be the location of the tomb of Saint Peter, where there stood a small shrine. With its increasing prestige the church became richly decorated with statues, furnishings and elaborate chandeliers, and side tombs and altars were continuously added.[1]

The structure was absolutely filled with tombs and bodies of saints and popes. Bones continued to be found in construction as late as February 1544. In the end, the design of the new basilica attempted to reconsecrate these remains as much as possible.[5] 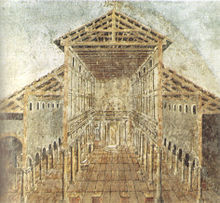 Fresco showing the interior of the basilica

Constantine went to great pains to build the basilica on the site of St. Peter's grave, and this fact influenced the layout of the building. The Vatican Hill, on the west bank of the Tiber River, had to be leveled. Notably, since the site was outside the boundaries of the ancient city, the apse with the altar was located in the west so that the basilica's façade could be approached from Rome itself to the east. Since the custom was to offer Mass ad orientem, (i.e. facing eastward), this meant that popes offering Mass in the basilica would unintentionally also face the congregation.

The building consisted of five aisles, a wide central nave and two smaller aisles to each side, which were each divided by 21 marble columns, which were all spoils from earlier pagan buildings.[6] It was over 350 feet (110 m) long, built in the shape of a Latin cross, and had a gabled roof which was timbered on the interior and which stood at over 100 feet (30 m) at the center. An atrium, known as the Garden of Paradise, stood at the entrance and had five doors which led to the body of the church, but was actually a sixth century addition.

The great Navicella mosaic (1305-1313) in the atrium is attributed to Giotto di Bondone. The giant mosaic, commissioned by Cardinal Jacopo Stefaneschi, occupied the whole wall above the entrance arcade facing the courtyard. It depicted St. Peter walking on the waters. This extraordinary work was mainly destroyed during the construction of the new St. Peter's in the 16th century, but fragments were preserved. Navicella means "little ship" referring to the large boat which dominated the scene, and whose sail, filled by the storm, loomed over the horizon. Such a natural representation of a seascape was known only from ancient works of art.

The Donation of Constantine (c. 1520) from Raphael's workshop shows how the interior of Old St. Peter's looked.[1] In the center background the painting shows the original altar arrangement, with four Solomonic columns in front of the altar. 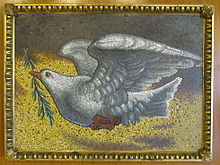 Mosaic with peace dove, done during the pontificate of Pope Innocent III (1198-1216)

The nave ended with an arch, which held a mosaic of Constantine and Saint Peter, who presented a model of the church to Christ. On the walls, each having 11 windows, were frescoes of various people and scenes from both the Old and New Testament.[7]

The fragment of an eighth-century mosaic, the Epiphany is one of the very rare remaining bits of the medieval decoration of Old St. Peter's Basilica. The precious fragment is kept in the sacristy of Santa Maria in Cosmedin. It proves the high artistic quality of the destroyed mosaics. Another one, a standing madonna is on a side altar in the Basilica of San Marco in Florence.

The exterior however, unlike earlier pagan temples, was not lavishly decorated.[1]

The altar of the Old St. Peter's used several Solomonic columns. According to tradition, Constantine took these columns from the Temple of Solomon and gave them to the church; however, the columns were probably from an Eastern church. When Gian Lorenzo Bernini built his baldacchino to cover the new St. Peter's altar, he drew from the twisted design of the old columns. Eight of the original columns were moved to the piers of the new St. Peter's.