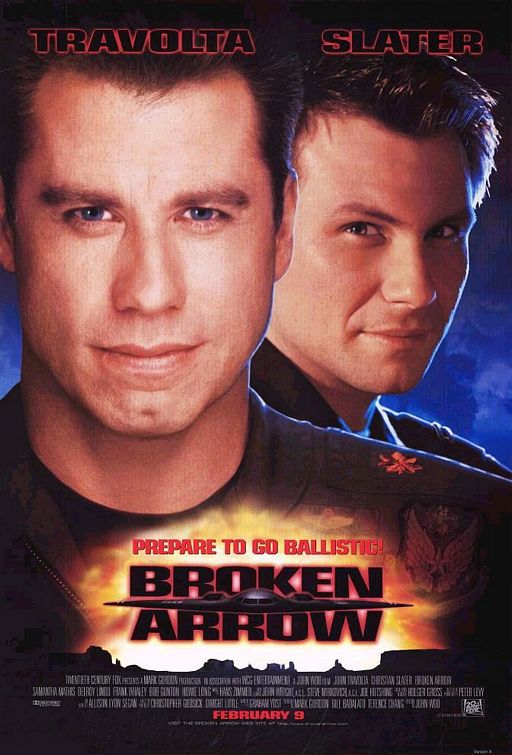 "Broken Arrow" is a 1996 American directed by , written by , and starring and . The original music score was composed by . It deals with the attempted theft of an American nuclear weapon.

Major Vic 'Deak' Deakins () and Captain Riley Hale () are pilots in the . The film begins with a boxing match between the two, where Hale is knocked out by Deakins. After the match Hale gives the bet money of the match back to Deakins saying he had stolen it from his wallet. Later both the pilots are assigned to a top secret exercise on a B3 Stealth Bomber with two nuclear missiles on board. Deakins and Hale take off from in the Bomber (a fictional advanced version of the actual stealth bomber) carrying the two live s on an evening exercise over .

After successfully evading Air Force during the exercise, Deakins has a friendly chat during which he distracts Hale to check their port-side window. At this point, he draws his gun to shoot Hale. A struggle ensues ending when Deakins ejects Hale. He then drops the missiles from the plane. When the airforce base regains radar contact with the aircraft, Deakins reports that "Hale's lost it. I'm punching out" and ejects leaving the plane to crash on the mountain side over the Utah canyons.

Meanwhile, a Special Forces team is sent to recover the missiles. They do not find the missiles in the remains of the plane and report a "Broken Arrow," a situation where nuclear weapons are missing. The team later locates the missiles in a canyon, but are killed while recovering them by mercenaries led by Deakins and Pritchett (), whom Deakins doesn't like sharing his command even Pritchett claims that the operation is "his money".

Hale survives the ejection and is found by Park Ranger Terry Carmichael () whom, after a brief stand-off, he convinces to help him track down Deakins and foil his plot. After recovering the weapons, Hale attempts to disable them using a safety feature which would render them unusable by intentionally entering the arming code incorrectly. Deakins, however, had anticipated this scenario, and Hale inadvertently arms the warhead. Finding himself unable to disarm the warhead, Hale decides to place it and the unarmed weapon deep into the abandoned copper mine where they've been working to prevent them from being used elsewhere. Deakins arrives and secures the unarmed warhead leaving Hale and Terry to die in the upcoming explosion. Deakins is chased by a helicopter as the mercenaries proceede with their mission; blackmailing the government with the threat of detonate the warhead in a civilian area. Pritchett berates him for allowing the helicopter to give chase and Deakins, fed up with his complaining, kills Pritchett by crushing his throat with a baton. Hale and Terry escape the mine via an underground river. Following the explosion during which the EMP (Electro-Magnetic Pulse) disables and subsequently destroys the NEST Team sent in to recover the warheads, Terry and Hale track Deakins to a motorboat to be used for transporting the remaining warhead. While trying to steal the boat, Terry is forced to hide onboard while Deakins moves the warhead.

Hale works out that Deakins intends to move the warhead onboard a train and sets off in a helicopter to find the train and hunt down the remaining mercenaries. On board the train Hale finds Terry. A gunfight ensues between Hale, Terry and Deakins' henchmen in which most of the mercenaries are shot dead. The train is set on fire when the one of the bullets hits a fuel barrel during the gunfight. Hale faces off against Deakins in hand-to-hand combat in the boxcar containing the warhead. Hale overcomes Deakins' superior abilities and retaliates with a flurry of blows, which weaken Deakins. Hale then leaps out of the train with a remote control and turns off the warheads timer. At the same instant, a detached train car comes slamming into the car where the fight had ensued. Due to the impact from the collision, the disarmed warhead flies into Deakins and the entire train explodes.

Hale, who survived, finds a 20-dollar bill fluttering on a twig in the debris of the train wreck; the same 20-dollar bill he had stolen from Deakins. He then finds Terry and they formally introduce themselves to each other.

* as Maj. Vic "Deak" Deakins
* as Capt. Riley Hale
* as Terry Carmichael
* as Col. Max Wilkins
* as Pritchett
* as Giles Prentice
* as Kelly
* as Chief Sam Rhodes
*Jack Thompson as the
* as Lt. Thomas
* as Max
* as Novacek