The Minus Eighty-Degree Laboratory Freezer for ISS (MELFI) is a European-built experiment storage freezer for the International Space Station. It comprises four independent dewars which can be set to operate at different temperatures. Currently temperatures of −80°C, −26°C, and +4°C are used during on-orbit ISS operations. Both reagents and samples will be stored in the freezer. As well as storage the freezer is designed to be used to transport samples to and from the ISS in a temperature controlled environment. The total capacity of the unit is 300 litres. 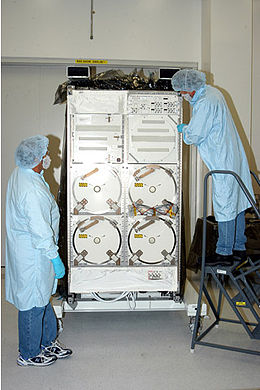 Minus Eighty-Degree Laboratory Freezer for ISS

The first MELFI unit, FU-1, was flown to the station in 2006 on STS-121, installed in the Destiny Laboratory Module, and commissioned by Thomas Reiter. The MELFI flight units were originally designed to be flown fully powered in the Multi-Purpose Logistics Module, permitting pre-made experiments to be flown to the station without contaminating or destroying any samples. The plan was to cycle the three MELFI units between orbit and Earth.

The final MELFI unit was flown to the ISS on board Space Shuttle Discovery during the STS-131 mission in 2010.

Each dewar is a cylindrical vacuum-insulated 75 litre container and can accommodate samples of a variety of sizes and shapes. The initial delivery of the unit also included a number of spare dewars.

MELFI was developed by the European Space Agency. Two units have been supplied to NASA and one to the Japan Aerospace Exploration Agency (JAXA). In addition ground units for training, experiment preparation, and use in control experiments have been built.[1]

During 2007, additional cold stowage and transportation options will become available on the station, including MERLIN (Microgravity Experiment Research Locker/ Incubator, +37°C to -15°C) and GLACIER (General Laboratory Active Cryogenic ISS Experiment Refrigerator, –80°C to –180°C).[2] As of June 11, 2009, MERLIN was being used aboard the station, "for cold storage of crew food and drink."[3]