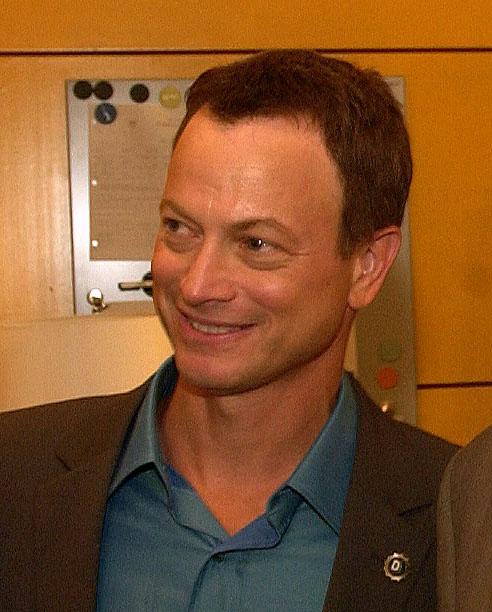 Gary Alan Sinise (born , ) is an American and . During his career, Sinise has won an Emmy and a and was nominated for and an . In 1992, Sinise directed the film and played the role of George Milton in the movie adaption of "Of Mice and Men". Sinise was nominated for the in 1994 for his role as Lieutenant Dan Taylor in "Forrest Gump". He won a award for Best Actor in a TV Movie or Miniseries for his role in "Truman". In , he played a corrupt police officer in the dramatic hit "Ransom". In 1998, Sinise was awarded an for Outstanding Lead Actor in a Miniseries or Movie for the television film "George Wallace", a portrayal of the late George C. Wallace, Jr., of . He currently stars in 's "" as Detective . He recently narrated a biography for and recipient at the Republican National Convention in support of John McCain's candidacy for President of the United States of America.

Sinise was born in Blue Island, , the son of Millie and Robert L. Sinise, who was a film editor. [ [http://www.filmreference.com/film/68/Gary-Sinise.html Gary Sinise Biography (1955-) ] ] He is of part Italian ancestry. [ [http://www.niaf.it/news/index.asp?id=437 NIAF News Releases ] ] He attended Highland Park High School in , Illinois, and continued his education at , in . In 1974, Sinise and two friends, and Jeff Perry, founded the . [ cite web|url=http://www.steppenwolf.org/ensemble/members/details.aspx?id=36 |title=Gary Sinise: Ensemble Member Bio |accessdate=2008-01-03 ] Since its founding, Steppenwolf has showcased the talents of such notable actors as Kevin Anderson, , , , , and . At Steppenwolf, Sinise honed his acting and directing skills and worked on more than thirty of the company's productions.

In 1982, Sinise's career began to take off when he directed and starred in Steppenwolf's production of "True West". In , he earned an for his direction and a year later appeared with John Malkovich in the PBS' "American Playhouse" production of the play. In , Gary directed "", a movie starring , about two brothers' fight against the foreclosure of the family farm. Sinise has appeared in many films including: "Forrest Gump", "Of Mice and Men" (which he also directed), "Apollo 13", "", "", "", "", "The Stand", "Impostor" and "The Green Mile". He also narrated the books for 's "" and "Of Mice and Men".

In 2004, he began his first regular , in the crime drama "", in which he plays Detective Mac Taylor. Several episodes have allowed Sinise to demonstrate his musical prowess, including a Season 2 episode where Mac Taylor plays the bass guitar in a jazz club with musicians Kimo and Carol Williams and Danny Gottlieb, members of the , which Sinise and co-founded in 2003. The band is named for Sinise's character in "Forrest Gump".

Apart from his television and movie work, Sinise is the host in the video for the ride , at , and the current model for Baume & Mercier watches. [ cite web|url=http://www.universe-of-luxury.com/baume-mercier/publicites/gary_sinise.html |title=Baume & Mercier and Gary Sinise |accessdate=2008-01-03 ] He also co-founded .

Sinise is also the narrator for the Discovery Channel's mini series "" in 2008.

Sinise has conservative Republican leanings. His "CSI:NY" co-star , one of the leading supporters of Democratic Presidential candidate and Senator , has noted that Sinise's political beliefs are much more conservative (than Harper's) but also says he and Sinise get along with each other on set and have decided not to discuss politics.