The Callery pear (Pyrus calleryana) is a species of pear native to China and Vietnam,[2] in the rose family (Rosaceae). Callery pears are deciduous trees growing to 15 to 20 m (49 to 66 ft) tall, often with a conic to rounded crown. Their leaves are oval, 4 to 7 cm (1.6 to 2.8 in) long, glossy dark green above, and slightly paler below. The white, five-petaled flowers are about 2 to 3 cm (0.79 to 1.2 in) in diameter. They are produced abundantly in early spring, before the leaves expand fully. Some people find their smell unpleasant.

The fruits of the Callery pear are small (less than one cm in diameter), and hard (almost woody) until softened by frost, after which they are readily taken by birds, which disperse the seeds in their droppings. In summer, the foliage is dark green and very smooth, and in autumn the leaves commonly turn brilliant colors, ranging from yellow and orange to more commonly red, pink, purple, and bronze. Sometimes, several of these fall colors may be present on an individual leaf. However, since the color often develops very late in fall, the leaves may be killed by a hard frost before full color can develop.

Callery pears are remarkably resistant to sicknesses or blight; they are more often killed by storms or high winds than by sickness. Some cultivars, such as 'Bradford', are particularly susceptible to storm damage.

The species is named after the Italian-French sinologue Joseph-Marie Callery (1810–1862) who sent specimens of the tree to Europe from China.[3][4] 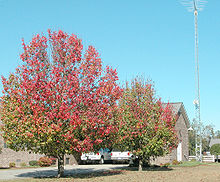 In much of North America, cultivars of Callery pear are so widely planted as ornamental trees that they have become a ubiquity in many urban and suburban communities. It is tolerant of a variety of soil types, drainage levels and soil acidity. Its crown shape varies from ovate to elliptical. The symmetry of several cultivars lends to their use in somewhat formal settings, such as city streets, shopping centers, office parks, and industrial parks. Its dense clusters of white blossoms are conspicuous in early spring along the boulevards of many eastern U.S. towns. At the latitude of Pittsburgh, Pennsylvania, the trees often remain green until mid-November, and in warm autumns, the colors are often a brilliant end to the fall color season, although in a cold year they may get frozen off before coloring. In the South, Callery pears tend to be among the more reliable coloring trees.

The neat, dense upward growth of 'Bradford' — which made it desirable in cramped urban spaces — also results in a multitude of narrow, weak forks, unless corrected by selective pruning at an early stage. These weak crotches make the Bradford Pear very susceptible to storm damage where snowfall is heavy or when ice storms occur, or during the high winds of severe thunderstorms. Because of this, and the resulting relatively short life span (typically less than 25 years), many groups have discouraged further planting of 'Bradford' itself in favor of other, stronger Callery pear cultivars (such other as 'Cleveland Select'), as well as increased use of locally native ornamental tree species.

Pear wood (of any species) has one of the finest textures of the fruitwoods. It is prized for making woodwind instruments, and pear veneer is used in fine furniture.[5]

Callery pear has been used as rootstock for grafting such pear cultivars as Comice, Bosc, or Seckel, and especially for nashi pear. Pyrus calleryana was first introduced into the United States (in 1909 and 1916) for agricultural experimentation, pre-dating the recognition of the potential value appreciation of the species as an ornamental plant in the 1950s.[2] 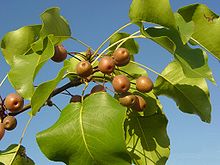 The Callery pear is an invasive species in many areas of eastern North America, outcompeting many native plants and trees.[2] In the northeastern United States, wild Callery pears sometimes form extensive, nearly pure stands in old fields, along roadsides, and in similar disturbed areas.

While various cultivars of the Callery pear are commonly planted for their ornamental values, their prolifically produced fruits are taken by birds, which disperse the seeds in their droppings. The various cultivars are generally themselves self-incompatible, unable to produce fertile seeds when self-pollinated, or cross-pollinated with another tree of the same cultivar. However, if different cultivars of Callery pears are grown in proximity (within insect-pollination distance, about 300 ft or 100 m[2]), they often produce fertile seeds that can sprout and establish wherever they are dispersed. The resulting wild individuals, of various genetic backgrounds, can in turn interbreed, producing more viable seed and furthering expansion and dispersal of the wild stand of the species. These plants often differ from the selected cultivars in their irregular crown shape and (sometimes) presence of thorns.

Callery pear is reported as established outside cultivation in 152 counties in 25 states in the United States.[6] While these wild plants are sometimes called "Bradford pear" (for the 'Bradford' cultivar), they are actually wild-growing descendants of multiple genotypes of Pyrus calleryana, and hence more correctly referred to by the common (or scientific) name of the species itself.[2]