Masud Rana is a fictional character created in 1966 by writer Qazi Anwar Hussain, who featured him in over 400 novels. Hussain created the adult spy-thriller series Masud Rana, at first modeled after James Bond, but expanded widely. So far 413 books have been published in this series which has gained a lot of popularity in Bangladesh. Written from the 1960s and continuing to present day, books are published almost every month by Sheba Prokashoni, one of the most popular publishing house of Bangladesh. Although Qazi Anwar Hussain started the series, it is an open secret that nowadays he doesn't write it any more. A group of ghostwriters are employed to produce all the new Masud Rana titles.

The Masud Rana books describes the adventures of its eponymous hero Masud Rana, an international spy of Bangladeshi origin, closely resembling James Bond in his expertise with weapons and women. Although the author of the series is Qazi Anwar Hussain, it is known that Hussain liberally borrows plotlines from popular Western spy thrillers of contemporary period. Nonetheless, the series became a boon for young people in post-war Bangladesh, who had few entertainment alternatives in an era pre-dating video games, cable TV and the internet. The books caused concern among some middle-class parents because of their occasional racy content, and reading Masud Rana was an activity often frowned upon. The series eventually ran to well over four hundred individual titles.

Apart from the novels, Masud Rana has also been adapted for one Bengali film and one TV Drama.

Masud Rana, a spy, a former major of Bangladesh Army continues missions all over the world. His boss is Major General (retired) Rahat Khan of the fictitious Bangladesh Counter Intelligence (BCI). According to the series, Masud Rana established the Rana Agency, a front cover for BCI in the form of a private investigation agency.

The character was created in 1966 by Bangladeshi novelist Qazi Anwar Hussain in an attempt to write an adult spy thriller for the Bangladeshi readers. According to the preface of "Dhongsho-Paharr" (first book in the series), he was inspired and encouraged to do such by his close friend Mahbub Amin. The hero, Masud Rana, was named by taking the first name of his friend, lyricist Masud Karim and the title of Rana Pratap Singh of Rajput clan who ruled Mewar, a state in north-western India from 1540 to 1597. Hussain admitted in an 1994 interview that he was heavily influenced by James Bond while creating the character. 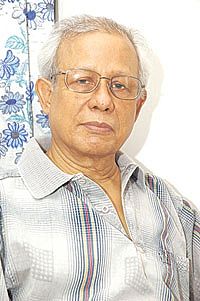 Masud Rana in other medium

A full length feature film about Rana was made in 1974 titled Masud Rana. The film was directed by Masud Parvez, producer and famous Bangladeshi actor known by his Stage name Sohel Rana. He also starred in the film as the hero. More than thirty years after its release, the film is now available in DVD. The film was made based on the Story Bishmaron [Amnesia] (Based on Strictly for Cash by James Hadley Chase.) It was the 11th story of Masud Rana, first published on 1967.

The first package drama in the history of Bangladesh, Prachir Periye (Beyond the Wall) telecast in 1994 was also based on a Masud Rana title Pishach Dweep (The Island of Evil), written by Qazi Anwar Hussain and screenplay by Atiqul Haque Chowdhury. Nobel and Bipasha Hayat acted in the drama.

Masud Rana is a Senior Operational Officer stationed at BCI HQ, Dhaka. The following is a summation of Masud Rana's history to date:

Rana has never been married. The closest he came to marry someone was in Protidondhi, where he and Rebecca Saul decided to get married. Sadly she got murdered before the marriage could take place. Sohana, a fellow BCI agent can be portrayed as the most convincing partner for Rana over the years. He has had many liaisons with members of the opposite sex, but none of particular closeness or length.

Masud Rana has excelled in solitary sports. He is an avid climber, diver, swimmer, and an excellent runner. Major Rana does not race cars, but he does enjoy driving very expensive vehicles very fast. Major Rana has gambled at many casinos, although never to ruin. He drinks, but not to excess.

He proved adept at training other candidates, initiating athletic competitions, and fostering a creative environment.

He has proved himself an exceptionally skilled and disciplined student of BCI methods. Rana is skilled with languages, and speaks fluently without accent in Italian, French and German, and speaks, reads and writes a passable Greek, Spanish, Mandarin, Cantonese and Japanese. Rana has a tendency to come across as arrogant and overly-confident in some situations. While confidence is a strength, arrogance is not. It is an important aspect of which to be aware.

Rana is , a loner. He works best in broad strokes when given general goals and the freedom to accomplish those goals in the manner he sees fit.

Major Rana has been a fine example of discipline and results-oriented action.

Additionally, Rana often appeared visibly bored and restless during more mundane aspects of training. He obviously enjoys risks, enjoys calculating the odds of success, and playing those risks to the edge of failure.

Rana continued to work as a Mission Specialist in such locations as the United States, Russia, the United Kingdom, France, Zimbabwe, Italy, Australia, Chili, Myanmar, Thailand, Hongkong, Norway, Sweden, Brazil, Egypt, India, Pakistan and many more countries of the world.

Major Rana's service with the BCI has been marked by moments of exemplary but risky bravado. While performing his duties with great zeal, Major Rana has often taken it upon himself to expand upon his orders, and, on more than one occasion, to violate them outright.

Masud Rana is a unique individual. He appears to be of sound mind and strong spirit. Rana does not fear death. Rana has a remarkable willingness to take near fatal risks. Rana is solitary. He does not console himself by surrounding himself with others. His athletic pursuits tend to be solitary: running, skiing, hiking, swimming, diving, and most remarkably, climbing.

Rana enjoys pushing himself to he limit, both mentally and physically. He is prone to boredom and mild depression when not challenged. Rana enjoys drinking and gambling, although the former seems to be a way for him to test his personal limits at times rather than a vice. Rana has been known to gamble more than he can afford to lose, although he always gambles with a plan and a clear understanding of the odds. Rana has strong interpersonal skills. He can act comfortably in many situations, but does not seek out companionship except, most notably, for sexual recreation. Rana's lone wolf personality-type tends to attract others.

Rana is goal-oriented, but he often seeks these goals in an indirect and secretive way. Rana seems to have an emotional and mental need for multiple layers of reality. He thrives when not revealing all of himself, carefully organizing the aspects of his personality he reveals to others. Thus Rana is excellent as burying information he does not wish to reveal.

Rana seeks structure in his life. He is a man of pattern and habit. He has acquired strong tastes. Rana both thrives under structure yet finds subtle ways of rebelling against it.Rana uses humor as a shield and a weapon. He is skilled at making cutting remarks that reveal insecurities of others or mock death, danger and risk.

Most importantly, Rana is deeply loyal to institutions. His concept of his nationality is a large part of his identity.

While the world is far from black and white to Masud Rana, he does tend to see it in stark terms of chaos and order, tradition and change. Rana has chosen to identify with order and tradition.

Major Rana is an excellent candidate for sensitive and demanding intelligence work. 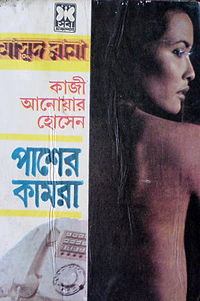 All Masud Rana books at a glance

Some of the books mentioned below are not actually based on the originals, rather, straight copy, some even copies word by word dialogue. Just names of the characters are changed. e.g. Sunflower, The Negotiator, The Fourth Protocol, Icon, etc. But most of the books by Qazi Anwar Hussain are something more than translations. These changes done by him, have given the series an emotional touch, from the point of view of a Bangladeshi, which is the major factor, that has popularized this series, even genre, in Bangladesh.

Each Rana paperback opens with these lines:

"An untameable daredevil spy of Bangladesh Counter Intelligence. On secret missions he travels the globe. His life is queer. His movements are mysterious and strange. His heart, a beautiful mix of gentle and tough. Single. He attracts, but refuses to get snared. Wherever he encounters injustice, oppression, and wrong, he fights back. Every step he takes is shadowed by danger, fear, and the risk of death.

Come, let us acquaint ourselves with this daring, always hip, young man. In a flash, he will lift us out of the monotony of a mundane life to an awesome world of our dreams. You are invited. Thank you."

Although 408 books have been published, but actually there are 285 plots, as, many of the books spans up to two or even three volumes.