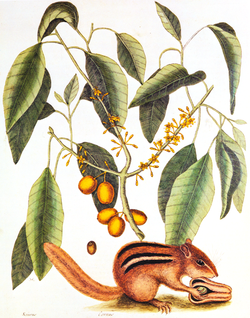 Plate from Natural History of Carolina, Florida and the Bahama Islands (1731-1743).

Mark Catesby (24 March 1682 – December 1749) was an English naturalist. Between 1731 and 1743 Catesby published his Natural History of Carolina, Florida and the Bahama Islands, the first published account of the flora and fauna of North America. It included 220 plates of birds, reptiles and amphibians, fish, insects, and mammals.

Catesby was born on 24 March 1682 and baptized at Castle Hedingham, Essex. His father, John Catesby, was a lawyer and gentleman farmer. His mother was Elizabeth Jekyll Catesby of Hedingham Castle, Essex. The family owned a farm and house, Holgate, in Sudbury, Suffolk. An acquaintance with the naturalist John Ray led to Catesby becoming interested in natural history. He studied natural history in London before going to stay with his sister, Elizabeth Catesby Cocke, in Williamsburg, Virginia in 1712. The death of his father, six years earlier, had left Catesby enough to live on. Elizabeth was the wife of Dr. William Cocke, who had been a member of the Council and Secretary of State for the Colony of Virginia. According to family lore, Elizabeth married Dr. Cocke, against the wishes of her parents, before emigrating to Virginia. After his stay in Williamsburg, Catesby visited the West Indies in 1714, and returned to Virginia, then home to England in 1719.

Catesby had collected seeds and botanical specimens in Virginia, which he had sent to a Hoxton nurseryman Thomas Fairchild. This made his name known to other scientists in England, and in 1722 he was recommended by William Sherard to undertake a plant-collecting expedition to Carolina on behalf of the Royal Society. Catesby settled in Charlestown, and traveled to other parts of eastern North America and the West Indies, collecting plants and birds. Many of these specimens were sent to Hans Sloane in London. Catesby returned to England in 1726. 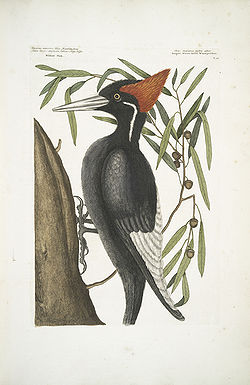 Quercus Anpotius. Plate from Natural History of Carolina, Florida and the Bahama Islands (1731-1743).

Catesby spent the next seventeen years preparing his Natural History. Publication was financed by an interest-free loan from one of the fellows of the Royal Society, the Quaker Peter Collinson. Catesby was the first to use folio-sized coloured plates in natural history books. He learnt how to etch the plates himself. The first eight plates had no backgrounds, but from then on Catesby included plants with his animals. He completed the first volume in 1731, and in February 1733 he was elected a fellow of the Royal Society. The second volume was completed in 1743, and in 1746 he produced a supplement from material sent to him by friends in America, particularly John Bartram. Catesby died just before Christmas 1749 and was buried on 23 December.

Carolus Linnaeus included much of the information in the Natural History in the 10th edition of his Systema Naturae (1758).