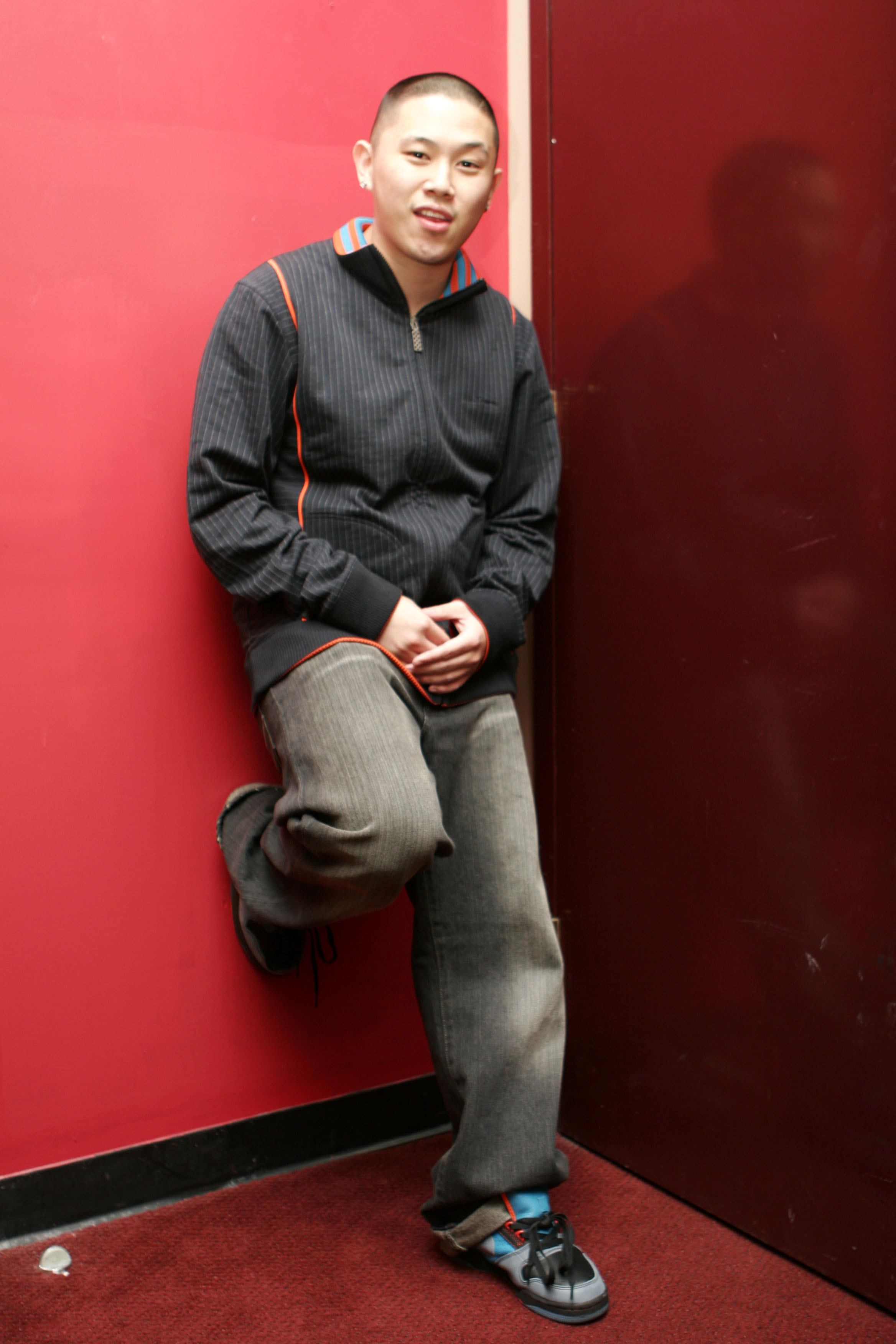 Jin Au-Yeung (zh-tspcy|t=歐陽靖|s=欧阳靖|cy=Āu Yèuhng Jihng|p=Ōuyáng Jìng) also known as Jin, Jin tha MC, The Emcee, and 100 Grand Jin is an American rapper born on June 4, 1982. He is the first solo rapper to be signed to a major . [ [http://www.asiaarts.ucla.edu/030404/music_jin_profile.html APAmusic ] ] [ [http://www.eastwestmagazine.com/content/view/44/40/ East West - The Asian American Lifestyle Magazine - Jin: Freestyling to the Top ] ]

Jin was born in and was raised in by his Chinese immigrant parents who ran their own restaurant. In junior high, he became fascinated with and dreamed of becoming a professional rapper. He was inspired by artists such as Nas, , , , , and other New York rappers from the early 1990s, an era now referred to as The Golden Age. When first taking up rapping, he struggled with the form of music but with much practice he realized he had a talent for freestyle rap. He soon began performing for his classmates, co-workers and whoever would listen. Jin began entering freestyle battles in local hip-hop clubs where he was usually the only Asian around. He was often underestimated due to his ethnicity. Jin's talent won crowds over, and he went on to win many battles. He quickly developed a reputation as Miami's most clever freestyler. But in the hip-hop world, Miami is better known for than clever lyrics. He knew this would be another obstacle to overcome in order to gain acceptance.

In 2001, he decided to move his family to , . He began performing freestyles and selling his own mix tapes on the streets, in hip-hop clubs and wherever else possible. He quickly gained a huge following, just as he had done in Miami. His big break came when the program "" began inviting local rappers to hold battles in a segment known as Freestyle Friday. Ready for the national exposure, he auditioned and again was underestimated due to his ethnic background. Although he lost to Diabolic, he kept his head and proved everyone wrong by winning the battles week after week. His first battle was against Hasan, who had six straight victories and was one victory away from being inducted into the hall of fame. Jin began the competition by delivering strong rhymes during his round. Hasan countered during his thirty second round with rhymes; however, with ten seconds left in the battle, Hasan lost his focus and was unable to deliver any more lyrics and stopped his performance. Jin was then declared the new champion. After winning for seven weeks straight, Jin was inducted into the show's Hall of Fame. The MCs he battled against during that period were:
* Week one: Hasan
* Week two: Sterling
* Week three: Skitzo
* Week four: Logan
* Week five: Lucky Luciano
* Week six: Skyzoo
* Week seven: Sean-Nicolas

That same night of his Hall of Fame induction, he announced that he had signed a deal with the .His first single under Ruff Ryders was titled "Learn Chinese". It took a sample from the 1992 song "They Want EFX", from hip-hop group . The second and final single for the album was originally supposed to be "I Got a Love" featuring , but was later changed to "Senorita" because Records didn't want to over-expose Kanye West. The album was originally scheduled to be released in the summer of 2003, but was delayed for over a year by the label. In October 2004, Jin released his debut album, "", which reached number 54 of the "Billboard" Top 200 albums chart. [ [http://billboard.com/bbcom/retrieve_chart_history.do?model.chartFormatGroupName=Albums&model.vnuArtistId=534044&model.vnuAlbumId=622186 Billboard.com - Artist Chart History - Jin ] ] Both of his singles, "Learn Chinese" and "Senorita", failed to be major mainstream successes. Nonetheless, Jin's music video "Learn Chinese" was the first video ever to be played on .

In 2003, Jin made an appearance in the movie "" as a mechanic named 'Jimmy'. His song "Peel Off" was featured on the "2 Fast 2 Furious" soundtrack. Jin was also featured on the Taipei-based pop artist 's 2005 album "". He also collaborated with artist, , in the song "Kohl Aaja (Come Closer)", when he was in London doing some promotion for "".

In November 2003, Jin was in involved in an argument with another aspiring rapper named Raymond Yu, who was a gang member linked with the street gang. This led to the shooting of Jin's friend Christopher Louie who is also known as LS. [cite web |url=http://www.taipeitimes.com/News/feat/archives/2005/03/05/2003225619 |title= Straight Outta Chinatown |work=Taipei Times |accessdate=2007-08-28]

Jin held the Fight Klub battle championship until he lost the title and a $10,000 purse to challenger Serius Jones. Although often thought to have been a racially-driven battle and despite mass speculation that Serius had used pre-written lines, Jin lost the title. Two weeks later, Jin defeated all contestants in the Fight Klub Championship held in the Bahamas for $50,000 (Serius Jones also entered the contest, but was defeated in the 1st Round by U.K rapper Professor Green). Jin challenged Serius that same night to a rematch after the tournament was over for $10,000, but Serius was disappointed with his loss and "lack of crowd" and therefore, did not participate in the battle.

On January 17, 2005, a New York-based radio station, , caused controversy when they released a song, "USA for Indonesia," making a joke out of the 2004 Indian Ocean Earthquake, which was offensive to many, especially Asian Americans. The incident was followed by an argument between and co-host Todd Lynn, and Asian American co-host , who was attempting to avoid the joke. Jin immediately wrote a song in protest, to Miss Jones, titled "Fuck the Tsunami Song."

Due to the long delay on the album, sales and where the contract was going to lead him, he decided with his manager to leave. When he left the Virgin label, he also left the Ruff Ryder label. Ruff Ryders is still active to date and Jin is in good terms with them.

On May 18, 2005, Jin revealed that he would be putting his rap career on hold in order to explore other options. To make this clear, he recorded a song titled "I Quit", which was produced by the Golden Child. The announcement was widely misunderstood to have marked the end of Jin's rap career. However, he later re-emerged under a different alias, The Emcee, and freestyled over such songs as Jay-Z's "Dear Summer." He released a single called "" where Jin displays his lyrical talent in explaining the history of hip-hop's greatest artists. The legendary DJ , who is credited as the founder of hip-hop, appears in Jin's music video. After signing with an independent label, CraftyPlugz/Draft Records, Jin released his second album, "" on October 25, 2005.

The rapper was featured in the "NBA Ballers: Phenom" video game, where players are given the chance to battle him in a freestyle contest.

Jin released two albums in 2006. The first one, "" is a mixtape/album that was released on August 29, 2006. The single released off the album is "FYI", for which the rapper shot and released a music video. The second album released in 2006 is Jin's third LP, "I Promise". Instead of releasing the album in stores, Jin released it on November 1, 2006 through his MySpace, with the first batch being autographed by himself. It was then sold on CDBaby.com with limited copies being pressed and not autographed for people who were unable to purchase it before. The first single for this album is titled "36-24-36 ( Apple Bottom Jeans )", a song in which Jin gives praise to Asian girls. Jin shot a music video for the song in December, but it has yet to be released.

Jin was a guest judge on BET's Freestyle Friday on December 15, 2006. Jin has stated that he doesn't like because of her "ching chong" incident. He has also recorded a song that insults Rosie titled "You're Fired." The song features voice clips of and uses the beat from famous diss song "Ether".

During the end of 2006, Jin worked on another album called "ABC". The album was recorded almost entirely in Cantonese. Jin officially launched his "ABC Jin" website on January 10, 2007. Jin premiered his music video for the first single, "ABC" on on January 26, 2007. The album was produced entirely by the and features guest appearances from Hong Kong actor and .

On Jin's MySpace, Jin mentioned that he is working on another English album named "Birthdays, Funerals and Things In Between". Jin premiered a song called "Open Letter to Obama" on April 24, 2007, which made him become 1st on 's Top 8 list on . [ [http://www.youtube.com/watch?v=Yi4tIbIcwLc YouTube - jin_june 5th NYC Obama organizing speech ] ]

Jin released a new song through his MySpace page. The song is titled "Fill In The Blanks", and Jin encourages his fans to record their own verse into the song. [ [http://www.youtube.com/watch?v=2LdtMf-Z_VA YouTube - FILL IN THE ] ]

After staying independent for 3 years Jin landed a deal with a major record company. "Universal Music Hong Kong" added Jin as one of four artists that are being promoted in the new deal that is called the "Universal Spends 8-Figures on 2008 Newcomers". Universal Music Hong Kong signed these four artists to promote their music, Jin being the top of the four. Jin has already gone to work with his next Cantonese album and plans to release it on the label by 2008. [ [http://asianfanatics.net/forum/Universal-Spends-8-Figures-on-2008-Newcomers-Keeva-Eva-MC-Jin-Mr-talk548819.html Universal Spends 8-Figures on 2008 Newcomers (Keeva, Eva, MC Jin, Mr.) - AsianFanatics Forum ] ] [ [http://easonchan101.blogspot.com/2008/06/universal-records-spends-8-figures-on.html Eason Chan 101: Universal Records Spends 8-Figures On Four 2008 Newcomers ] ]